Spell-Binding Spells — a review: Having a ball all right, but for a glitch or two

Spell-Binding Spells — a review: Having a ball all right, but for a glitch or two

Cricket has been unfairly biased towards the batsman, which is precisely why Spell-Binding Spells is a long-awaited, relevant book to remind us that bowlers are also part of the sport.

I did a social experiment before reading Spell-Binding Spells. I asked a random sample of over fifteen people (of course, they were not aware of this) about their favourite cricketers. All fifteen named batsmen. Some got torn between two or three names again, all of them were batsmen.

Yes, cricket is a batsman s game. When Indian princes played cricket they seldom did anything but bat. They were even reluctant to field. Elsewhere, in England, the bowlers were almost always professionals (who got paid for playing the sport). Some amateurs considered bowling a job beneath them. Some were simply not good enough. And there was a significant overlap between the two sets.

Batsmen always get precedence in scorecards. When they show you match summaries, the batsmen feature to the left despite the fact that the bowler begins the action. In fact, if you think about it, the bowler is the doer in every cricket ball; the batsman merely responds.

The T20 era has led to meatier edges and springier bats. Earlier, Matthew Hayden had unleashed the Mongoose bat. Dennis Lillee had used an aluminium bat. Lance Cairns (and on rare occasions, Kapil Dev) had brandished the Excalibur. All of them were designed specifically to suit the needs of the batsman.

Alas, the bowler is not entitled to such luxury. The ball continues to remain the same. He cannot even clean the seam without a million television cameras and commentators and fans scrutinising a zoomed image of every cell of his fingernail.

No, cricket has been unfairly biased towards the batsman. And that is precisely why Spell-Binding Spells is a long-awaited, relevant book to remind us that bowlers are also a part of the sport, for it brings together a list of the greatest spells of all time in international cricket and beyond, spanning from Gobo Ashley to Barinder Sran.

The book is divided into several categories across time and space and formats and outcome. And since they are sorted mostly by quality, Stuart Broad unhesitatingly appears after George Lohmann, and Albert Trott fits smugly between Narendra Hirwani and Bob Massie (you know the spells that helped them make it to the book, don t you?), taking you through a cricket-lover s version of time travel.

The range is vast. The narration is punctuated with wonderful snippets. You always knew what connects Jim Laker and Anil Kumble. Their feats, as expected, follow one another in the book. However, do you know about the only man to be present in the stands during both matches?

My favourite chapter is titled, self-explanatorily, Amazing Spells from Forgotten Cricket Lands. It features John Laing, Bart King, Scott Huey, and Clem Gibson. You can Google. Or you can simply find the relevant chapter in Spell-Binding Spells.

There is also that one, Magnificent Spells, Heart-Breaking Losses. For long I have insisted that the outcome of a cricket match is determined by 22 not-necessarily-independent variables (25, if you include the umpires). A bowler is merely one of them. Thus, even if he bowls the greatest spell of his life or even the greatest in history, he may end up on the losing side and thus not be branded a match-winner and get quickly forgotten.

And then there is one on those forgotten men the ones who never got to showcase their chances at the highest level. Cricket may have forgotten them, but Charles Kortright, Padmakar Shivalkar, Vintcent van der Bijl, and Franklyn Stephenson have all got their dues here.

I wish I could have ended the review on a high. Unfortunately, the numerous proofreading errors have made it impossible for me to do the same. I do not want to pinpoint specific mistakes (though Tony Locke and Glen McGrath, among others, really made me cringe), but they are too glaring to avoid. The proofreading and editing have been amateurish at best. One can only hope for a more professional touch to the same in subsequent editions.

There is the other aspect that of a hurried blandness while describing what happened in the match outside the spell in question. The aim of the book to describe scrupulously every detail of the spell is clearly laid down; however, the extra effort would have made it more pleasing for the reader.

Overall it is a nice read. The foreword by VVS Laxman adds to the charm. 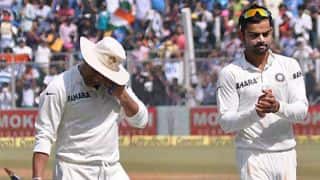