The series is now led by Australia but what this match has shown that both the teams are eager to win the series and will go all out against each other in the remaining matches.

Sri Lanka and Australia played the third One-Day International (ODI) of the five-ODI series at Dambulla. Winning the toss, Angelo Mathews decided to put his team to bat. The hosts succumbed to early jolts as their openers failed to get them off to a brisk start. Danushka Gunathilaka continued his poor form with the bat and again looked clueless against the fiery spell of Mitchell Starc. Tillakaratne Dilshan, playing his last ODI match, scored a valiant 42 but it was someone else who took them to a respectable total. In the end, Australia won the match by two wickets courtesy a fighting knock by George Bailey. Bailey fought hard for his side with others under lights against Sri Lanka’s spinners. Aditya Sahay compiles and brings a list of memorable moments from the third ODI as follows: FULL CRICKET SCORECARD: Australia vs Sri Lanka 3rd ODI at Dambulla

Sri Lanka’s misery in top-order continues: Gunathilaka has to find out some way to play Starc as he has not been able to see his opening spell in the entire series against Australia. His poor run of form continued as his stumps were again cleaned up by Starc.  Dilshan was then accompanied by Kusal Mendis, who has played well so far against the Australians but departed early as well. They were tottering at 23 for 2 which brought in-form batsman, Dinesh Chandimal.

Dilshan scored 42 in his last ODI innings: Dilshan looked more confident in his approach compared to the first two games. He was playing his shots and looking in good stead. Chandimal, on the other hand, played with responsibility and looked composed as ever. He was patient from ball one and watchful which worked well for the team. The duo added 73 runs for the third wicket but Dilshan got out for 42 trying to pull a ball from Adam Zampa but was caught at short mid-wicket by George Bailey. He was acknowledged by the crowd on his departure as he has been outstanding as a player for his nation for over a decade. LIVE CRICKET UPDATES: Australia vs Sri Lanka 3rd ODI at Dambulla

Chandimal continued his rich vein of form as others came and went: Mathews could not do much with the willow which added more pressure on the lower-middle order. Australians were on target and were being rotated well by the stand-in captain, David Warner. As a result, Dhananjaya de Silva added 30 runs with Chandimal and departed for 12 whereas Kusal Perera and Thisara Perera came in and went without doing anything significant. On the other hand, Chandimal batted like he was playing on a different surface. The pitch required to be patient and stick around and he was ready to buy time in the middle. He was composed and kept the scoreboard ticking without playing any rash shots.

Records galore for Chandimal: Chandimal was on a record breaking spree in the first innings of the match. Chandimal scored his fourth ODI hundred whereas this was the first time he brought up a ton on home soil.  He brought up his sixth fifty in his last seven innings as he missed out on the last game by getting out at 48. This time he was up for the challenge as he went a step ahead and scored the first ton against Australia. He also completed 3,000 runs in the 50-overs format.

Australia lost first three wickets quickly: Warner and Aaron Finch were expected to come hard against the home team but the chase was always going to be tricky under lights and against Sri Lanka’s spin. Warner and Finch departed early as Mathews and Amila Aponso got the early wickets. Shaun Marsh came in at No. 3 but did not trouble the scorers much as he fell for 1 off Mathews to put Australia on backfoot.

George Bailey added fifty run stands with Travis Head and Matthew Wade: Australia needed a steady partnership in the middle and someone who could lead the way with a patient innings. Bailey ensured Australia were still there in the chase as he understood the nature of the pitch. He anchored the innings really well and rotated the strike with both Head and Wade. Bailey added 62 with Head off 81 balls whereas he stitched another 81 with Wade off 95 balls. Bailey stood tall on a tough pitch and tricky chase which earned him the Man of the Match award. MATCH REPORT: Australia beat Sri Lanka by 2 wickets in 3rd ODI

Australia slipped in the end but managed to win by two wickets: Australia’s lower-order provided an interesting end to Dilshan’s game. They were 187 for 4 and dropped to 206 for 7 but somehow managed to sneak past the finish line with two wickets remaining. Australia won with four overs remaining but Sri Lankan spinners did not give up which was a pleasing effort. Seekkuge Prasanna and Dhananjaya de Silva took a wicket apiece to bring their team back into the match but sadly it was Australia who had the last laugh.

The series is now led by Australia but what this match has shown that both the teams are eager to win the series and will go all out against each other in the remaining matches. 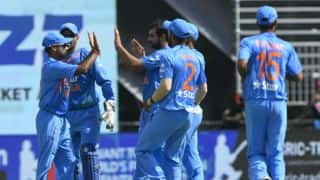