An excellent performance by Sri Lanka sees them sail home against Scotland.

Sri Lanka beat Scotland by 148 runs in their ICC Cricket World Cup 2015 match at Bellerive Oval, Hobart. After posting 363 runs on the board, Sri Lanka completed a good performance with the ball and Scotland were largely dismal, punctuated by a few knocks of individual defiance. Rishad D’Souza looks back at some highlights of the match. READ: Kumar Sangakkara gets record fourth consecutive ton in match against Scotland at ICC Cricket World Cup 2015

Kumar Sangakkara re-writes records: Kumar Sangakkara has been in his own zone; in fact, it looks like he is in the best form he has ever been and with that century against Scotland made it four tons in a row and now holds the record for most successive One-Day International (ODI) Hundreds. Since the string of hundreds has come during the World Cup, he is now also the record holder for most centuries in a single World Cup edition and he could well add to that tally and better both records in the coming games. READ: Kumar Sangakkara becomes first cricketer to affect 500 ODI dismissals

Angelo Mathew’s fiery fifty: Angelo Mathews came and gave the innings a big push lower down the innings, smashing a 21-ball 51. His effort set the base for a 380+ score. He even smashed four consecutive sixes in his innings to Matt Machan but got out on his attempt to make it five in five. READ: Angelo Mathews begged Kumar Sangakkara not to quit after ICC Cricket World Cup 2015

Josh Davey’s wickets: Josh Davey picked three wickets in the match and in doing so surpassed Trent Boult and Tim Southee as the leading wicket-taker in the ICC Cricket World Cup 2015 taking his tally to 14 wickets. He picked the important wickets of Dilshan, Sangakkara and Mahela Jayawardene. He will have only one game after this to build on that number against Australia. Top 10 batsmen in ICC Cricket World Cup 2015

Scotland lose early wickets: Scotland lost their first wicket and a sizeable chunk of their hopes to chase down the huge total of 364 in the very second ball of the innings when Lasith Malinga got the wicket of Kyle Coetzer. Scotland lost Calum MacLeod and Matt Machan soon after and were reduced to 44 for three. Top 10 bowlers in ICC Cricket World Cup 2015

Mommsen-Coleman show fight: After the loss of three early wickets one could surmise that Scotland would get folded very cheaply but Preston Mommsen and Freddie Coleman had other plans. They played very responsibly and together stitched a valiant 118-run partnership. Mommsen ended with 60 runs and Coleman fell soon after for 70 runs. However the effort was never going to be enough to see Scotland through. Top 10 fielders in ICC Cricket World Cup 2015

Sri Lanka clean tail and seal victory: After Mommsen and Coleman fell, only Richie Berrington displayed any semblance of a fight and smashed a few lusty blows, but all others got cleaned up easily and Scotland were bowled out for 215 and with that Sri Lanka won by 148 runs. Top 10 wicketkeepers in ICC Cricket World Cup 2015 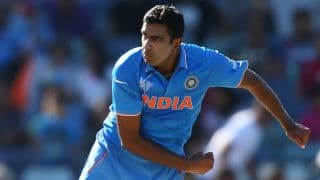