The problem for Sri Lanka is the inability of the other batsmen to consistently perform at the highest level.

Sri Lanka had the perfect opportunity to come back strongly after dismissing India for 312 on Day Three. However, disciplined bowling by the Indians and uncharacteristically weak batting saw the Sri Lankan top order stumble like a house of cards. Apart from Dinesh Chandimal and Kusal Perera, none of the top seven batsmen were able to provide a solid foundation to the unsteady batting of the hosts. Whether or not Kumar Sangakkara and Mahela Jayawardene’s retirement will hurt the Sri Lankan batting, Sudatta Mukherjee feels the side’s batting average leaves a lot to be expected.

Their batting averages as of the ongoing series are as follows:

Apart from Chandimal and Mathews, both of whom played crucial knocks in the first Test, and debutant Kusal Perera, none from the others have a batting average that inspires much confidence. India vs Sri Lanka, 3rd Test, Colombo: Pujara digs out his value again

After India were dismissed for 312 on Day Three of the third Test, one would have expected the Sri Lankan batsmen to capitalise on the situation. However, the Indian bowlers took advantage when Sri Lanka was left toiling at 47 for the loss of 5 wickets. Just after lunch, they lost Thirimanne as well. With debutant Perera, and tailender Rangana Herath, Sri Lanka reached 127, easily avoiding follow-on. However, Perera did not last long after scoring 55. Cheteshwar Pujara’s century could push Rohit Sharma out

The problem for Sri Lanka is not the retirement of Kumar Sangakkara and Mahela Jayawardene, but the inability of the other batsmen to consistently perform at the highest level. For a player like Thirimanne, who has already played 21 Tests, a batting average of 26.13 is absolutely shameful.

Perera, who made his debut in the third Test against India, made a free-flowing 55. Everyone in the above list has played at least 20 Tests. With the exception of Mathews and Chandimal, none from the list have had an inspiring international career till now.

Marvan Atapattu is the coach of the Sri Lankan team. He had played about 90 Tests and ended his career with a batting average below 40. Atapattu did not have a glittering start to his career, but, later on blossomed into one of their finest batsmen. The current Sri Lankan batsmen could learn a bit from their coach’s career, if they want to have a winning team. 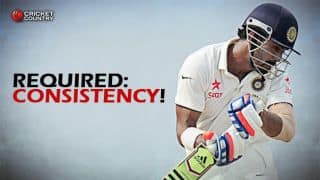 KL Rahul has talent, but lacks the consistency needed for Test cricket