Sri Lanka’s tour of New Zealand has seen a manifestation of an incorrigible streak.

Sri Lanka is hurtling into the abyss days before the ICC Cricket World Cup 2015, and it seems increasingly unlikely that they’d be able to stem the inexorable pull of defeat, feels Ankur Dhawan.

Sanath Jayasuriya had lamented that the only good to have come out of Sri Lanka’s reckless tour of New Zealand 2014-15 is that they play the same opposition come February 14, almost hinting that it has been a missed opportunity. This gloom has enveloped the dressing room ever since the string of losses began away from home, but now seems like an eternity.

Earlier, after the intoxicating victories in the Asia Cup 2014, ICC World T20 2014 and a historic Test series win in England, combined with One-Day International (ODI)  subjugation of the same side, Sri Lanka had been hailed as favourites as they streamed into the ICC Cricket World Cup 2015. All that seemed to have transpired in a parallel universe.

It is easy to fall into step with bad habits but hard to dispel them. Sri Lanka’s tour of New Zealand has seen a manifestation of that incorrigible streak. Their Wellington Test faux pas has hounded them hitherto. After a stupendous 2014, Sri Lanka suddenly find themselves at the opposite end of the spectrum as the new year unfolds. Their consistent failure to close out games is governed by multiple reasons.

Lasith Malinga’s absence has never been as conspicuous. Sri Lanka have invariably frittered away games in the second half of their turn with bat or ball. Christchurch, Nelson and, then, twice in Dunedin, Sri Lanka let games slip from the imminent jaws of victory. Bereft of the services of their designated death bowler, the Lankans were strapped for options in the dying moments of each innings with the ball.

Nuwan Kulasekara, who had that area covered briefly, seems to have lost his mojo. His best performances have come in tandem with Malinga, whose mere presence makes any bowler twice as effective. But it takes two to tango. Having said that, there has been a discernible slip in his pace, which is now in the vicinity of the mid 120kmph mark — a staple diet for finishers around the world.

The trio of Suranga Lakmal, Shaminda Eranga and Dhammika Prasad have featured sporadically but failed emphatically. The dearth of experience in death bowling has surfaced time and again but was most glaring in the fifth ODI at Dunedin, where Luke Ronchi and Grant Elliott, who were the last recognised pair for New Zealand, added a whopping 198 runs in the final 20 overs.

Furthermore, Sri Lanka find that though everything is going right with Tillkaratne Dilshan, Mahela Jayawardene and Kumar Sangakkara, who have made a mountain of runs, yet victories remain elusive. Dilshan has led the way literally and figuratively with 316 runs in five innings at 63.2 with two identical scores of over a hundred. Those numbers are astonishing for an opener of his impetuous disposition against a top quality bowling attack that has two new balls at its disposal. What should have theoretically been the toughest phase for Sri Lanka to negotiate, has on the contrary been the most lucrative.

Jayawardene follows with 264 runs at an average of 52.8 (significantly higher than his career average) with a vintage 104 in the first ODI and missing another hundred by a whisker at Nelson in the fourth. From Kumar Sangakkara’s standpoint the runs may have dried in the ODI series, but that is a just testimony to his insatiable appetite for runs. For mere mortals his numbers in the ODI series are still worth emulating, as he has scored 208 runs at a healthy average of 41.6 with two fifties to his credit, his highest being a sumptuous 81 in the sixth ODI at Dunedin.

All this reinforces Sri Lanka’s despondency at the fact that games have been thrown away in the second half of the innings with the middle and lower-order consistently failing to drive home the advantage, shredding all the good work done at the top.

The Lankan fans must shudder at the prospect of the top three failing in a crucial ICC Cricket World Cup 2015 tie. That the Lankan trinity of Dilshan, Jayawardene and Sangakkara will be mentally jaded after their herculean efforts has added to the misery. Besides, the law of averages is bound to catch up with them at some point. These imponderables make it next to impossible for a team beaten neck and crop to stage a miraculous comeback in a matter of 20 days, especially considering the extent of their ordeal in New Zealand.  It is hard to imagine players not queuing up for the next plane back home and even less conceivable that their spirits will magically rise, come the ICC Cricket World Cup 2015. 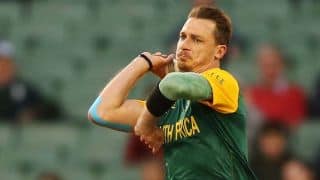