In his fourth Test, Srinivas Venkataraghavan captured 8 New Zealand wickets in the first innings of the Kotla Test. He eventually dismissed all 11 New Zealand batsmen in the Test.

March 20, 1965. In his fourth Test, Srinivas Venkataraghavan captured 8 New Zealand wickets in the first innings of the four-day Test at Delhi. Arunabha Sengupta recalls the exciting Test match that saw the off-spinner get 10 wickets in a match for the only time in his career.

When Srinivas Venkataraghavan’s off-break turned sharply and trapped Graham Dowling leg-before on the first day, the erstwhile Maharajkumar of Vizianagaram was ecstatic. In his pompous description for Indian Express, influenced by Neville Cardus but woefully short of the master’s wizardry with words, he described the delivery as a ball that “slithered past his bat like a snake on a polished floor.”

Soon, as wickets fell one by one, and Venkat accounted for most of them, Vizzy’s imagination soared beyond Cardusian fancies. He drew comparisons of this young bowler in his fourth Test match with the “pencil thin” Lance Gibbs, as well as bracketing him with Jim Laker and Ghulam Ahmed.

Taking nothing away from Venkat, who bowled brilliantly that day, the truth was somewhat less sensational. The wicket was parched dry and turned sharply from the first morning. With Ramakant Desai’s opening burst going down, again according to the wildly scribbling pen of Vizzy, as ‘flat champagne’, captain Mansur Ali Khan Pataudi quickly brought his spinners into action. And with the New Zealanders opting for an overly cautious approach, they soon played into the waiting Indian hands.

Venkat, in fact, was lucky to be playing in the Test. He had made his debut in the first match of the series, and it would perhaps have been a different story had Erapalli Prasanna not been on his sabbatical to complete his engineering degree.

The young man had bowled decently in 3 drawn Tests, capturing nine wickets at 27 apiece. The selectors had strangely opted for debutant V. Subramanya as a seaming all-rounder for the final Test on a blatantly spinning wicket. The man making way for him had been the more established Salim Durani, who had also taken nine wickets in the series at an average of 20 apiece. However, Durani’s recent run with the bat was perhaps playing on important minds, and India went in with Venkat, Bhagwat Chandrasekhar and Bapu Nadkarni as the three slow men.

These were four-day Tests. Already some bold selection decisions had been taken during the series. Vijay Manjrekar had scored a hundred in the first Test, but had been sidelined, because he was considered too slow for this variety of the game. The Indian line-up was filled with batsmen who could score quickly. With three stalemates, Pataudi was determined to win. He took a look at Desai, Jaisimha and Subramanya and turned to Venkat and Chandra.

While Chandra was guilty of long-hops, which allowed Terry Jarvis to ride on a flurry of boundaries, Venkat was extremely stingy, refusing to give an inch.

After Dowling had been undone by that ball which evoked the serpentine simile, Jarvis missed the line of a ball to give Venkat his second wicket. Bevan Congdon now came in and played an excellent counter-attacking cameo.  During an exciting hour, Congdon skipped down the wicket and struck three sixes, one off each spinner. New Zealand seemed to be sitting pretty at 108 for 2. But, then Venkat held one back, Congdon drove too early and Chandra held a shoulder high catch at mid-off. After this brief colourful patch of batting, the Kiwi show turned extremely drab.

Captain John Reid, suffering from the age-old stomach bug that has forever tormented  touring teams in India, lashed out at a Chandrasekhar googly and was bowled. Left-handed Bert Sutcliffe, who had hit a double hundred on the same ground 10 years ago, had little idea of the vagaries of turn, his drive off Venkat getting nowhere close to the action,and the ball went undisturbed to hit the off-stump.

The dangerous Bruce Taylor hammered 3 fours and a six before edging Chandrasekhar to slip. All-rounder Vic Pollard drove fluently through the off side and was stopped by a beauty from Venkat went through his bat and pad to peg the stumps back in a classic off-spinner’s dismissal.

New Zealand had slumped to 191 for 7. Ross Morgan was still at the crease, battling away with incredible patience. The Indian field closed in for the kill.

However, the end was delayed. At 207, Pataudi took the new ball as soon as it became available. It proved to be a tactical mistake. Morgan seized on to the benign medium pace and plundered 21 runs from 2 Desai overs. The day ended with New Zealand on 235 for 7. Venkat had captured 5 for 62.

By the following morning, Pataudi had learnt his lesson. He started with Venkat and Chandra straight away. The wily off-spinner purchased bite from the sun-baked clay strip and produced a couple of supreme deliveries to trap both the overnight batsmen, Morgan and wicketkeeper John Ward, leg before wicket. The last man Frank Cameron found the rampaging spinner too hot to handle, and was bowled for a duck.

The visitors had folded for 262 and Venkat’s analysis read 51.1-26-72-8. The Madras bowler had become just the fourth Indian to pick up 8 wickets in an innings, after the first trinity of Indian spin — Vinoo Mankad, Subhash Gupte and Jasu Patel.

It remained his career-best analysis.

In front of Prime Minister Lal Bahadur Shastri, who watched the match during the post-lunch session, the Indian batsmen flowered.

Dilip Sardesai was on a roll. He had saved India from the ignominy of crushing defeat in the previous Test match with a second innings 200. Now he tore into the New Zealand bowling with delectable strokes, cruising to 106 with as many as 18 boundaries. Hanumant Singh struck the ball well, and Chandu Borde was absolutely ruthless as both hit eighties — the latter making his runs in less than 2 hours. “His bat was as straight as the funnel of a liner” wrote Vizzy.

And then came Pataudi. He undeniably found the four day format to his liking. Amid growing applause he scored his second hundred of the series — etched with glittering strokes. (“With canine ferocity and sabre fashion he slashed and hooked” — wrote Vizzy in Indian Express) Seventeen boundaries and 2 sixes were studded in his 113. India scored at more than four an over, declaring at 465. The pace dependent Kiwi attack could do little to contain the determined Indian batsmen.

In the second New Zealand innings, Jarvis stood defiantly for over 5 hours to score 77 before Venkat pitched one on the off stump that whirred past his bat and hit leg. One run later, he had Taylor caught in the slips.

Black clouds hovered over Feroz Shah Kotla, the light was dim, the Kiwis could opt to go off at any time. But, captain Reid would have none of it. He played on in excellent spirit. In the lower order, Richard Collinge rode his luck, harnessing fortune with some sound application, scoring 54 before edging Venkat to Farokh Engineer.

Cameron was playing a fine innings, capitalising on the perennial Indian problem of getting rid of the tail, when wicketkeeper Ward pushed to point and attempted a single that wasn’t there.

Venkat finished the second innings with 4 for 80 from a marathon 61.2 overs, his match analysis reading 12 for 152. In a career spanning 18 more years and 53 more Tests, he would never take 10 wickets in a Test again. After Jim Laker, Venkat became the second bowler to dismiss all 11 opposition batsmen in a Test.

It left India 70 runs to win in just an hour. Pataudi switched the batting order, sending Engineer instead of ML Jaisimha to open with Sardesai. The move was not successful, with the wicketkeeper managing just 2, and Jaisimha following soon after for a single. Pataudi himself came in at No 4 four and blasted six boundaries, including a straight smash to the sight screen off a beamer from Cameron.

Sardesai too joined in with three crisp fours and soon the target was just a hit away. The New Zealanders, while fielding brilliantly, had not attempted to slow the game down. Even a drizzle had been ignored.

After 66 runs had been ransacked from eight overs, Reid came in to bowl to Pataudi and the Indian captain hit across the line to be bowled. It was left to Hanumant Singh to drive Sutcliffe to the boundary to bring up the winning runs, with 13 minutes to spare.

A Test win was rare in those days of Indian cricket. The congratulatory messages to the heroes included missives from both Prime Minister Lal Bahadur Shastri and President Dr Zakir Hussain. 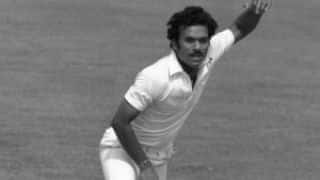 Madan Lal: One of the best domestic all-rounders of his era