Jacques Kallis had made his ODI debut on January 9, 1996 against England at Cape Town.

Jacques Kallis announced his retirement from One-Day Internationals (ODIs) and T20Is to end his International cricket career. Over the years he has emerged as one of the finest all-rounders of the present generation. Bharath Seervi takes a statistical view of his ODI career.

Jacques Kallis has decided to end up his International cricket career by announcing retirement from the shorter formats of the game — ODIs and T20Is. He had retired from Test career at the end of the series against India in December 2013. With his retirement from Test career he was to focus on the shorter formats at least till the ICC World Cup 2015.

Kallis did not have a good ODI series against Sri Lanka; he failed, scoring a duck, one and four. He did not bowl either. He decided to hang up his boots after this poor series. In the previous ODI series against India in South Africa, too, his performance was not attractive: he scored just 10 and 10 in the two ODIs he played in. On the occasion of his exit from the International cricket arena, below is a small statistical analysis on his ODI career.

Jacques Kallis had made his ODI debut on January 9, 1996 against England at Cape Town. In his 19-year long ODI career he played 328 matches scoring 11,579 runs, picking up 273 wickets and holding 131 catches. He averaged 44.36 with bat and 31.79 with ball. The table below lists breaking up of his career into four parts.

Some statistical notes on Kallis in ODIs

–          Kallis had eight scores in nervous-nineties – four out and four not out. He is fifth in the list of most nervous-nineties scores in ODIs behind Sachin Tendulkar (18), Aravinda de Silva (9), Grant Flower (9) and Nathan Astle (9).

–          Jacques Kallis has achieved the double of 250 runs and 10 wickets in an ODI series/tournament twice in his career (In bilateral ODI series in West Indies in 2000/01 and in VB series in Australia in 2001/02). Viv Richards and Andrew Symonds are the only others to achieve the same in two series/tournaments.

Kallis scored 1300 runs in the 2001 with 11 half centuries and no century. It was then the record for highest number of runs in a calendar year in ODIs without a century, but has been overhauled recently by Misbah-ul-Haq in 2013 as he scored 1373 runs with 15 half centuries. 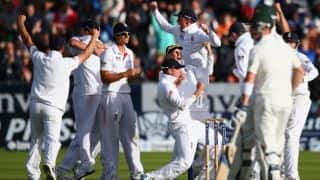