Statical achievements by Pakistan which display their clinical performance against the Aussies.

It was a memorable win for Pakistan over world No. 2 Australia in the first Test at Dubai. Abhijit Banare presents some statical achievements by Pakistan which display their clinical performance against the Aussies.

15 – This is the joint third highest number of wickets picked by Pakistan spinners against Australia in a Test match. Iqbal Qasim and Abdul Qadir shared 15 in 1992 at Faisalabad. The highest is 18 in 1980 where Qasim and Tauseef Ahmed shared eight in the first innings and all 10 in the second. The next best is 17 in 1988 with Qasim, Qadir and Ahmed sharing the honours. The spinners in the 2014 Test were Zulfiqar Babar, Mohammad Hafeez and Yasir Shah.

Misbah-ul-Haq is the oldest captain (40 years and 151 days) to win a Test against Australia since WG Grace in 1896.

26 – Younis Khan is the leading centurion for Pakistan. There were some interesting statistical achievements for Younis.

4 – This is the most number of centuries scored by Pakistan in a Test against Australia. The previous best was three achieved by Mohsin Khan, Qasim Umar and Javed Miandad in 1983 and Saleem Malik, Moin Khan and Aamer Sohail in 1994.

Fastest ton: Sarfraz Ahmed’s 80-ball ton is the fourth fastest ton by a Pakistan batsman. He is also the second fastest ‘keeper after Adam Gilchrist to do so. Among Pakistanis, only Shahid Afridi (twice 78-ball ton) and Majid Khan (74) have done better than Sarfraz.

4 – Most sixes by a Pakistan opener in a Test innings. Ahmed Shehzad achieved this in the second innings. Previous record was three held jointly by Saeed Anwar, Afridi (achieved twice) and Imran Nazir.

13 – Number of times Pakistan have won a Test against Australia. The last time they won was in 2010 at Leeds and before that was way back in 1995. 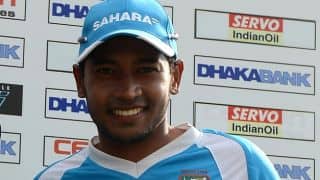