Stats across eras 4: How greats from Bradman to Sachin fare on same scale

Stats across eras 4: How greats from Bradman to Sachin fare on same scale

In the fourth part of the statistics across eras series, Arunabha Sengupta compares the leading batsmen of cricket history by evaluating where each one stood among his exact contemporaries. The article lists the 41 batsmen since 1920 who managed to perform better than 80% of their peers. 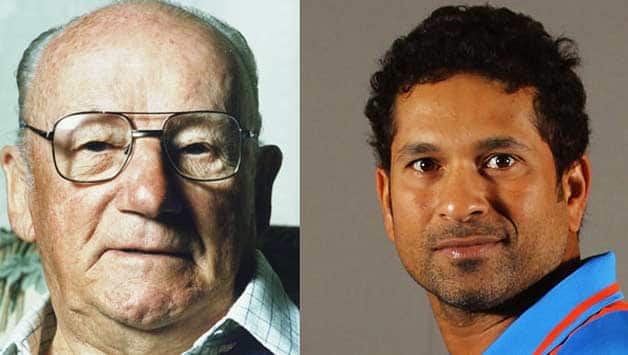 In the fourth part of the statistics across eras series, Arunabha Sengupta compares the leading batsmen of cricket history by evaluating where each one stood among his exact contemporaries. The article lists the 41 batsmen since 1920 who managed to perform better than 80% of their peers.

In the previous part of the series, we had defined a measure – Comparative Index – to find where exactly batsmen stand with relation to their exact contemporaries. We had used the index to determine where the leading Indian batsmen across eras stood were placed when viewed against his peers.

In this episode we take the train of thought to its logical conclusion, by finding out the Comparative Indices of the leading batsmen across time.

Again, we understand that conditions, opponent strength and other influencing factors change from era to era, and hence direct comparison of averages do not make sense. However, in Part 2 we had seen that within any significant period of time, the best batsmen always ended up with the best averages. Hence, our method is to use the Comparative Index to find out where leading batsmen stood with respect to the performance of others during the exact period during which they played the game.

To briefly recap our algorithm:

2. Find his first and last days in Test cricket.

3. Compute the average of all the players during that period (global average).

4. Consider all players satisfying minimum Test criterion who averaged higher than global average during that period in (2) – to eliminate the chance of varying number of tail enders skewing the rating.

5. Find out the rank of the batsman among all the batsmen in (4).

6. Given the rank, find out how many batsmen he would be ahead of if the number of contemporary batsmen (4) had been exactly 100 (to bring everyone on the same scale). This is the Comparative Index.

We look once again at the positives of this calculation –

ii. The average of all batsmen (global average) during this period is 31.14.

iii. Between the dates in (i), there are 137 batsmen who played 20 or more Tests and scored above this average (ii).

v. That gives him a comparative index figure of 99. For every 100 contemporary batsmen of his era, he would be ahead of 99.

For Sunil Gavaskar, the same computation yields 94. He is ahead of 94 of 100 contemporary batsmen who averaged more than the global average during his playing days.

As noted in Episode 3, Kumar Sangakkara averages higher than Tendulkar during the latter’s playing period, but we cannot automatically conclude that Sangakkara have a comparative index above Tendulkar. Indeed, during the period Sangakkara has played Test matches (July 20, 2000 to April 7, 2012), Tendulkar has averaged more than him. One is thus staying clear of direct comparison of averages and focusing on the index a player achieved during his playing days.

We have carried out this analysis only for batsmen who have played after 1920. The reasons for this are given in the appendix.

The following table lists all the batsmen after 1920 who ended with a Comparative Index of 80 plus.

As we see, Don Bradman (no surprises there), Everton Weekes, Jacques Kallis and Javed Miandad finish in front of all their exact contemporaries. Tendulkar finishes ahead of 99% of players who played in the same period. Big names follow in the form of Ken Barrington, Garfield Sobers, Graeme Pollock, Greg Chappell, Ricky Ponting.

While looking at the table, one should bear in mind that all the batsmen have been evaluated against their peers through their entire career, not only in their pomp. Hence, Vivian Richards, who would have had an index of 100 if he had retired four years before he ultimately did, has to be satisfied with 90. Wally Hammond slips to 87 because of his meagre after World War 2 period.

The ones to just miss getting into the 80+ group are Gordon Greenidge, Mohammad Azharuddin, Bobby Simpson, Virender Sehwag and Rohan Kanhai.

*Criteria for minimum Tests played is 20 for all batsmen other than 15 for careers which ended before 1950.

Note: Home/Away, first innings/second innings etc. have not been considered here. However, this method can be refined for to include those specific details as well
Appendix: Why batsmen before 1920 are not considered …
i) In the first part of this series, we noted that the batting conditions became standardised only after 1920, from which time the overall average has remained more or less constant. This makes it meaningful to compare someone like Zaheer Abbas (1969 and 1984) with Allan Border (1978 to 1994) in the spans that their careers intersected, because conditions did not undergo statistically significant changes between 1969 and 1994.

ii) Before 1920s, the conditions were unstable. To compare Victor Trumper (1899 to 1912) with Jack Hobbs (1908 to 1930) would make little sense. Although their careers intersected, Trumper played a lot of his cricket in the era of bad pitches, and Hobbs got much better conditions. So, in comparison to Trumper’s total career, the period when Hobbs’ career intersected with the Australian would have a much higher average – although they may have been scoring equally between 1908 and 1914.

This is because Trumper would be handicapped by the 1899 to 1908 played on bad tracks, and Hobbs would be in the happier position of having batted from 1914 to 1930 on much better pitches.

Since conditions of pitches changed drastically during their era, the pre 1920 batsmen cannot be compared on a global level by this method, but we will have to do with a decade by decade analysis as done earlier.
Hence, we don’t consider either Trumper or Hobbs in this analysis although Hobbs did end up with an index of 91.