Stephen O'Keefe's unconquerable will to overcome physical pain against Sri Lanka was highly commendable, and will act as an inspiration for the rest of the Australian team in the remaining leg of the tour.

Australia after ruling the match for almost a day and a quarter, Sri Lanka jumbled the visitors to a 106-run comprehensive defeat in the first Test at Pallekele. Lankan spinners made Australian batsmen dance to the their tune, much the Pied Pier of Hamelin. The pitch on Day 1 already looked like a typical subcontinental one with dark and dusty patches smudged all-over. After batting first, the hosts were packed for a paltry total of 117 in just 34.2 overs, with Australia feeling high and might. That was the only time the visitors were on cloud nine, and since then, it was a downward spiral in both batting and bowling departments, against a relatively inexperienced bowling attack. Apart from some resistance from Steven Smith, none of the inveterate batsmen David Warner, Usman Khawaja and Adam Voges were anywhere near their intimidating shadows. Much from the darkness rose a knight in shining armour, an injured Stephen Norman John O’Keefe or as we better know him as Steve O’Keefe. FULL CRICKET SCORECARD: Sri Lanka vs Australia, 1st Test at Pallekele

O’Keefe, while bowling in the first innings, picked up 2 for 32. He was impressive, keeping his line and length intact. O’Keefe, known for his solid batting in Australia’s domestic season playing for New South Wales, played a 94-ball 23 knock in the first innings, helped his team guide past 200. But, tragedy struck O’Keefe while chasing a ball in the outfield, which lead to him pulling his right hamstring. Just two balls into his 17th over, O’Keefe left the playing field and did not emerge to bowl again.

A few tests and MRIs revealed that he suffered a moderate grade tear and would have to sit out of the remainder of the series. Disappointed indeed, but O’Keefe did not surrender to his physical pain.

But when Lakshan Sandakan bowled a loopy delivery to trap Nathan Lyon in front, while he tried to sweep him, Australia were 8 down for 157 and that’s when quite unexpectedly O’Keefe walked in, with courage and determination.

He lingered his way onto the field, with a heavy shoulder with the teams pride at stake, partnered Peter Nevill, and stood like a rock at one end. ALSO READ: Nine cricketing heroes who put pride before pain for their teams

While clearly looking hesitant to run even an inch, O’Keefe defended like a pack of wolfs, saving their feast from howling vultures. He got of the mark on the 22nd ball, with a beautiful sweep shot past backward short-leg. And since then, O’Keefe just laid down his bat to anything and everything.

He, along with Nevill, kept on blocking, nudging down and jamming balls to safety. Yes, O’Keefe was lucky to have survived while they were a few dropped catches and close leg-before shouts, much to the misery of Angelo Mathews, who looked hapless at times. But during their stay at the crease, the duo pulled off a remarkable feat, battling for 176 balls and adding just 4 runs for the 9th wicket stand, out of which 137 were consecutive dot balls.

Nevill, who might still have to prove his batting potentials, clearly looked jumpy at the start of his innings, calmed his nerves and batted like a batsman who was out to save his team. The pair displayed immense amount of sturdiness, trying to bat out on Day 5, on an almost venom-spitting Pallekele track against a fantastic spin trio.

Hampered by O’Keefe’s injury, runs were not at all easy to come, but playing against time was the real task at hand. For the first time in the Test, it was Australia, who would have been praying to the Rain Gods. But to their ill-fate, rain decided not to embrace the field. But nonetheless, O’Keefe exhibited characteristics similar to the indomitable spirit of Rick McCosker and Steve Waugh, two of Australia’s most ballsy cricketers.

McCosker had once batted fearlessly against bitter rivals England in the Centenary Test after getting hit by a bouncer from Bob Willis. End result: Australia won the match by 45 runs.

Waugh once pulled his calf muscle while playing against England during the Trent Bridge Test. Determined to be fit, Waugh managed to stand up and participate in the final Test of Ashes, 2001. Waugh muscled his way (no pun intended) to a near career-ending injury as he crawled his way to a ton, leading Australia to a 4-1 victory. O’Keefe would have hoped for the same outcome (win), which McCosker and Waugh had the privilege of pulling off.

Yet, O’Keefe’s stay in the middle for 98 painstaking deliveries surely ingrained the fact that batting against Sri Lankan spinners, in full tandem is not beyond the bounds of possibility. Thus, Australia’s top order either learn the art of using a dead bat or understand how to not give away their wickets straightforwardly, but rather play with a straight bat and not poke away unnecessarily.

Not at all an Everestesque task like Waugh’s, was it?

But, as O’Keefe departs for home to nurse his injury, the Australians certainly have someone to look up to. Not just an inspiration, but a symbol of bravery. O’Keefe has surely taught them the stoical acceptance of pain.

(Vishal Mehra is a reporter at CricketCountry, currently tripping on #thenightof and #mrrobotS2, and plays cricket once every white moon. His twitter handle is @capturethecatch ) 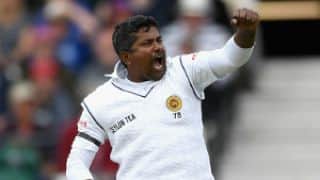