The dust had settled on the Border-Gavaskar Trophy 2016-17. The arm-chair cricket-fanatics had made their predictions. It was more about Australia losing 0-4 than India winning 4-0. Not that there is biasness towards India, but a certain section of followers take a liking to belittle the mighty Aussies.

The bookies had picked their best bets. Ravichandran Ashwin will be the highest wicket-taker. He will pick up his force-of-habit, Man-of-the-Series award. Ravindra Jadeja will be the second-best man in the wickets tally. Maybe Nathan Lyon will hover around them. Virat Kohli will be the highest run-scorer. Steven Smith and David Warner will follow him in the runs column.

Will Australia play Glenn Maxwell as a spin all-rounder? Or will they go for Ashton Agar instead? Or better stick to the strengths and dish out a three-pacer strategy. The brainstorming had begun ever since they started practicing in UAE. Australia had beat their brains out to at least put up a good fight against India, who had gotten the better of South Africa 3-0, New Zealand 3-0, and England 4-0 at home. Full cricket scorecard: India vs Australia, 1st Test in Pune

No, wait. There is a leg-spinner on the tour. His name is Mitchell Swepson. But he is only a 23-year-old. Can he take on the likes of Kohli and Ajinkya Rahane? If Mitchell Starc and Josh Hazlewood are the two pacers and Lyon the spin spearhead, who do Australia draft in?

Nathan Hauritz, Jason Krejza, and Lyon had earlier toured, but could not take Australia on the doorstep of victory. They even tried Cameron White’s haywire leg-spinners as their main weapon. Absolutely nothing had worked.

Australia went for Steve O’Keefe instead. He is one of the many slow left-arm orthodox bowlers we see these days. Plus, he does not have variations in his armoury. He bowls his regulation finger-spin. He is no Jadeja either. He is not the No. 2 bowler in the ICC Test Rankings. Above all, Australia do not even have a spinner who could second-fiddle Lyon. They have a pace trio but not a spin duo.

Before the series opener, O’Keefe had taken 14 wickets in 4 matches, two in subcontinent and two at Sydney. His average read 31.54. He also had series of injuries. If anything, he has always been on the wrong side of the luck ever since he became an international player. He had pulled his hamstring in a series that saw a fellow left-arm orthodox Rangana Herath take 28 wickets at 12.75. Well, if not 12.75, maybe a 22.75 would have done a world of good to O’Keefe’s confidence. But again, his injury was like a speed-breaker that ended his journey in Sri Lanka.

He, for that matter, is a commoner playing amidst Kohli, Smith, Rahane, Ashwin, Starc, among others, although he is a bit older than them. But he is still a commoner not making any headlines, not even considered in the playing XI.

The perception has changed in a matter of 3 days and 12 wickets, though. O’Keefe is not looked at the same anymore. He has now turned a new leaf in the records book.

The arm-chair fanatics and bookies were taken aback, for O’Keefe is not a commoner anymore. He obliterated India, so much so that he picked up 6 wickets in a span of 4.1 overs, in the first innings.

However, O’Keefe did not have a start that the eventual scorecard would suggest. Smith was in a teasing mood. He introduced O’Keefe in the very second over, just like India attacked with Ashwin. No comparison there, but the responsibility on O’Keefe was significantly heavier than that of Ashwin, for he was against a batting line-up of No. 1 team in ICC Test Rankings.

His first spell constituted 6 overs, going wicketless for 23 runs. Rahul and Murali Vijay made him look ordinary, just another spinner from the visiting side. Smith replaced O’Keefe with his go-to man Lyon. Even he went wickets in his first spell. Lucky for Australia that their pace battery dismissed Murali Vijay, Cheteshwar Pujara, and Kohli.

During the lunch break, O’Keefe was seen practising with consultant Sridharan Sriram. He had already bowled a spell under scorching heat of Pune, but refused to heave a sigh in the break. Maybe he was hell-bent on writing everyone off. No one noticed, though. There were talks of Starc or Lyon taking the bulk of the wickets. Evidently, O’Keefe was sidelined.

The ball was 32-over old when O’Keefe started his second spell. Before that Rahul had hit a four and a massive six over O’Keefe’s head. Be that as it may, Rahul tried to do something similar but found David Warner at long-off. O’Keefe got his first wicket on a soil that saw spinners catching the best of the batsmen in a web.

But little did O’Keefe know that he would later go on to attain the best figures for an Australian bowler in India. Little did the statisticians know that O’Keefe, not Kohli or Ashwin, would become a delight in their line of work.

O’Keefe then dismissed Rahane. The ball spun sharply away from the right-hander. He looked as if his trust was broken. This is his home. He is not supposed to struggle. He was out caught at second-slip. A delivery later Wriddhiman Saha edged one at first-slip. O’Keefe had 3 wickets in an over and all crucial ones.

Ravindra Jadeja, who a few minutes ago was laid back in the dressing room, was batting in the middle. O’Keefe cleaned up him as well, and then the last two to dismantle India at 105, taking a lead of 155.

The second innings, in all probability, was an encore of the first one. O’Keefe spelled doom for India. His figure read identical: 6 for 35. On a battle field that was planned to dent Australia’s spirits, O’Keefe smothered India with simplicity and hard work.

He did not bowl short. He aimed the length area, leaving a batsman confused whether to go forward or rock back or play or leave. He kept things simple, and let the pitch take care of the rest. As fate would have it, he was on the right side of the luck. He got Rahul, Rahane, and Saha yet again. But this time, he got the big fish. He uprooted Kohli’s off stump. He made him do what Jadeja had done to Smith in Border Gavaskar Trophy 2013-14. Kohli left the ball, thinking it would spin away. It held its line instead, making the Indian captain take the long walk.

This is not the first time Indians have played on a diabolical track. They in fact grew up playing on maidans, where the ball hit the uneven patch and took off. They had faced many a Steve O’Keefe in the past. They had even risen above such challenges.

But the first Test was different. Indians spinners had prepared to obliterate the Australian batsmen. Their fielders had prepared to take low catches around the bat. They had even prepared to play Lyon. But they had not even in their wildest of dreams imagined that O’Keefe would take a six-wicket haul, not once but twice.

“So to say that I was going to take 6 for 35, no I didn’t think but I had belief I could keep hitting the same area, and that was just the result of it today,” said O’Keefe after the match. 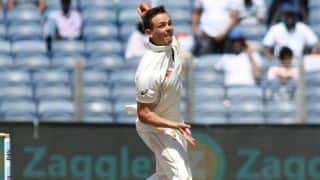 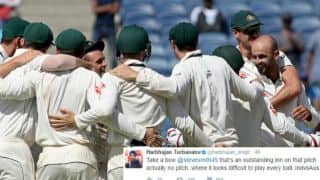