On January 6, 2004, cricket bid farewell to one of its most adored sons, and what a farewell it was! Jaideep Vaidya goes back to that glorious day eight years ago at the Sydney Cricket Ground, when 168-Test veteran Steve Waugh padded up for one last time. 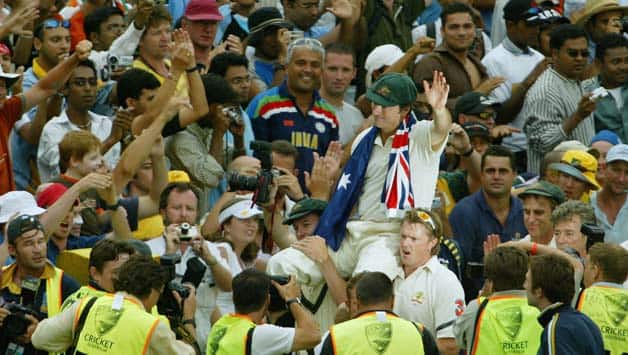 Adieu, hero… Steve Waugh acknowledges with a wave of the hand as the crowd and players gives him an emotional farewell © Getty Images

On January 6, 2004, cricket bid farewell to one of its most adored sons, and what a farewell it was! Jaideep Vaidya goes back to that glorious day nine years ago at the Sydney Cricket Ground, when 168-Test veteran Steve Waugh padded up for one last time.

With the series drawn at 1-1 going into the fourth and final Test match at the Sydney Cricket Ground (SCG), a record turnout was expected by the organisers during the five days from January 2-6, 2004. Steve Waugh, the epitome of the Australian resolve and never-say-die aggression, was calling quits on a much-celebrated career as player and captain. The scene was set for a historic match at the equally historic SCG as Australia’s most-capped player and, arguably, its most successful captain walked out for the toss with his Indian counterpart to tumultuous applause. However, almost like an anti-climax, Sourav Ganguly called right and put his team in to bat on a good, bouncy track.

The next four days witnessed events unforeseen – at least by the Australia and Waugh faithful who had flocked to the SCG hoping to be part of a fantastic win for the home side. India put up their then highest ever Test total, 705 for seven declared, in the first innings. This was mainly thanks to one of the most defiant knocks you would ever witness on a cricket pitch: Sachin Tendulkar, coming off a rather abysmal series by his standards, batted for 613 minutes to score 241. He was given company in the middle by the ever-reliable VVS Laxman (178) and half centuries by Virender Sehwag and young Parthiv Patel.

Australia were never going to get close and were bowled out for 474 in their first innings, 31 short of the follow-on cut-off. Ganguly, however, decided against letting the Aussies bat again. The reason behind the decision wasn’t clear, whether he wanted to give rest to his bowlers or just wanted to avoid any chance of a defeat, but the critics nevertheless feasted on him for it. India scored 211 for two and declared almost at the fag end of day four, giving Australia an improbable 443 to win in just over 90 overs. The top four Australian batsmen got their team off to a good start and reached 117 for two at lunch on day five. But when Damien Martyn fell in the second session with the score at 170 for three, he did leave the door slightly ajar for the Indians to sneak in. And then, it was time.

Walking out to bat at his usual three-down position, Waugh was met with a magnificent ovation from the Sydney crowd. They had been waiting for this moment ever since the 38-year-old had announced his retirement before the start of the series. The entire attendance of 27,056 was on their feet cheering and applauding a monumental 20-year career in the service of Australian cricket. As Waugh walked to the crease and marked his stance, the crowd got even louder – if that was even possible. It was a tribute that drew resemblance to the fantastic ovation received by Sir Don Bradman during his last innings in 1948. To match that was a testament to the colossal figure that was Steve Waugh.

Calm as you could be coming in to bat in your final Test innings, Waugh chewed his gum and nonchalantly walked a few paces down the crease, tapping the surface with his bat. A big yellow banner reading “S. Waugh rules Ok!” went up in the stands as chants of “Steve Waugh…Steve Waugh” started to ring through the SCG. Finally, after doing a few stretches in the middle of the pitch, when Waugh walked back to the crease and took guard to face Anil Kumble, the roar of the crowd quickly transformed into an electric buzz as the ace Indian leg-spinner flipped the ball in his hands waiting to bowl.

Kumble’s first ball to the retiring Australian captain was a flighted, juicy lolly that pitched outside off-stump. Waugh went to smash it through the covers as he had done a million times before, but found the bottom edge. The ball slowly rolled along in mid-on’s direction to 27,000 people’s dismay. The following delivery, which was the last ball of a very good over from Kumble, was solidly defended by Waugh.

If any of the spectators had begun fearing the worst and become iffy after those first two balls, Waugh dispelled any such feelings in the very next over. Facing the first ball from Murali Kartik, Ricky Ponting immediately gave strike to his predecessor. If Waugh had decided that he was going to give Kumble that deserved respect, Kartik wasn’t that lucky. Bowling around the wicket, a flighted delivery from the slow left-armer angling down the leg was deftly flicked off the pads to the long-on boundary. Waugh was off the mark with a four and the SCG was loving every moment of it.

As Waugh settled in, the flow of shots began to improve gradually. Kumble was dealt with respect, but the other bowlers, especially Kartik, soon began to bear the brunt of a determined Australian captain. Waugh lost Ponting early at 196 for four, but was joined by an equally determined Simon Katich next, who had saved Australia the blushes with a century in the first innings.

It wasn’t faultless batting by Waugh by any means, there were a few scrappy shots sprinkled in here and there. But when he found the fence, he found it in style. His favourite regions – point and cover – were exploited regularly as the spectators sitting by the fence summoned the red cherry towards them with open arms.

By tea, Australia were 204 for four and needed 240 runs in the final session to record what would be a sensational win. Australia had to take a call – either go for it with the big shots or defend it out for a draw. The first option obviously came with a risk of losing wickets. The pair chose not to go for unnecessary risks and, yet, maintained a run-rate of just under four.

As India began to get frustrated by the duo, skipper Ganguly brought on part-timers Virender Sehwag and Tendulkar to try their luck. But Waugh and Katich effortlessly manoeuvred anything that the Indians threw their way as the match headed for a draw.

This was also around the time one of the most hilarious sledging incidents in the history of banter transpired. India’s 18-year-old baby-faced wicket-keeper, Parthiv Patel, had clearly grown frustrated of squatting all day. When Waugh came up to the batting crease, Patel reportedly said, “Come on, just one more of the famous slog-sweeps before you finish.” Waugh wasn’t going to take any of that from someone half his age. He turned around and shot back, “Look, respect me. When I made my Test debut, you were still in your nappies.”

Meanwhile, Katich also dug in along with his skipper, and slowly and watchfully parried Australia towards safety. As Waugh approached the eighties, the buzz around the SCG grew louder. He had slog-swept Sehwag and Kartik to the square and mid-wicket boundaries with flair. He had taken 115 balls to reach his 50th fifty earlier, but took only 42 more deliveries to reach 80. Was a fairytale hundred in the offing?
With the score on 338 for four and just a few more overs left before stumps, Kumble came around the wicket to Waugh. The 38-year-old went on his knees again and spanked the leggie over mid-wicket, but a collective “Aaaahhhh” went around the SCG as Tendulkar pocketed it at the rope. The fairytale was over.

As Waugh walked back to the pavilion, the entire SCG stood up to applaud one of Australia’s most courageous soldiers on the cricket pitch. Waugh raised his bat to acknowledge the crowd’s love and support that had surely helped motivate him throughout his long career. Once back in the dressing room, the Baggy Green and his lucky red rag that he carries in his pocket – both tattered and worn out with use – were kitted for one last time as the shutterbugs clicked away. As clichéd as it may sound, it definitely was the end of a glorious era in Australian cricket.

As the match eventually ended in a draw, Waugh led the Australian team out for a lap of honour. His teammates devotedly hoisted him on their shoulders and sprinted across the oval as the fans had one last look at Steve Waugh on the cricket pitch. Even though the Indians had retained the Border-Gavaskar Trophy by securing a draw, at the risk of sounding unfair to them, the occasion was mightily overshadowed by a cameo-ish, yet typical, Waugh innings that slammed the door shut on any hopes India might have garnered in winning the match.

Rahul Dravid, in his foreword for Waugh’s autobiography “Out of My Comfort Zone“, wrote: “I will remember the pain of not beating him in that last Test of his, in Sydney in 2004, but also recall fondly his final innings in cricket against us, for it was a typical Steve Waugh innings: mind over matter, a man not in form but soldiering on, taking his team to safety.”

He couldn’t have received a better tribute.

(Jaideep Vaidya is a multiple sports buff and writer at Cricket Country. He has a B.E. in Electronics Engineering, but that isn’t fooling anybody. He started writing on sports during his engineering course and fell in love with it. The best day of his life came on April 24, 1998, when he witnessed birthday boy Sachin Tendulkar pummel a Shane Warne-speared Aussie attack from the stands during the Sharjah Cup Final. A diehard Manchester United fan, you can follow him on Twitter @jaideepvaidya. He also writes a sports blog – The Mullygrubber ) 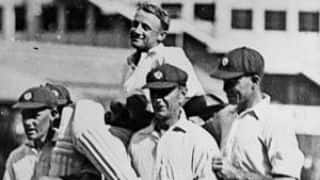