Shane Watson's injury will give Steven Smith a chance to impress at No 3.

Australia batsman Steven Smith is eager to prove himself at the No 3 position in the upcoming One-Day Internationals (ODIs) to be played against Pakistan next month. Australia’s regular No 3 batsman, Shane Watson, has been ruled out of the tour due to injury and that gives Smith a chance to impress.

Smith who scored a brilliant 99 for NSW City against NSW country at Hovell Oval in Penrith on Sunday said that he’d love to make full use of the opportunity he’ll be provided.

“I would love to bat at No 3 in ODI cricket, I had a bit of an opportunity at No 3 in the last two games we played In Zimbabwe. To be honest I probably didn’t take my chance there and would love another opportunity there to try impress so I could do well.”, he said.

Smith managed to score 36 and 10 in his two innings against South Africa at the No 3 position but felt he was still learning the art of batting at the vital position. Since debuting for Australia in 2010, Smith was groomed as a spinning all-rounder capable of batting in the middle order. However, since the start of cricket season last year, Smith has moved up to No 3 for NSW with great success.

“I batted at number 3 for a whole year at the Ryobi last year and learnt a fair bit out of that. It is a good place to bat in ODI cricket and I enjoy it”, he said. In the Ryobi Cup last year, Smith was the second leading run scorer as he amassed 321 runs at an average of 53.5 which included four fifties.

Batting Smith at number three against Pakistan on the slow, low, turning tracks in the UAE is a wise choice given his sublime footwork against spin bowlers and the likelihood of Pakistan’s spinners bowling majority of the 50 overs.

Given Michael Clarke isn’t a guaranteed starter in two Tests that follow the ODI, Smith’s form in the ODI could also dictate if Smith is elevated to No 3 in the long version of the game if Clarke is ruled out.

Smith felt his batting had evolved in the last 18 months in Test cricket to take the next step if required. “What were expecting is pitches that are going to be slow and take a bit of reverse swing and spin. Batting at No 3 for me will be okay in those sorts of conditions. Hopefully the boys pull up fine but we will see how we go.”, he said. 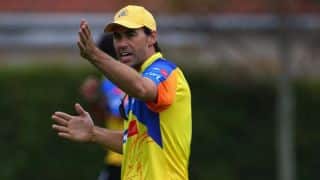