India have been searching for a pace-bowling all-rounder for years; Binny is proving to be the answer to those prayers.

Stuart Binny scored his maiden One-Day International (ODI) half-century to rescue India in the first match against Zimbabwe and followed up with another crucial cameo in the second ODI. His bowling was steady in both games as well. Shiamak Unwalla feels Binny is proving to be good enough to play as India’s premier ODI all-rounder. READ: India select a perfect squad for tour of Zimbabwe

Ravindra Jadeja has done a commendable job for India with both bat and ball in ODIs since 2013. He enjoyed a batting average of 36.30 and a bowling average of 30.26. Ever since coming back from injury, however, he has been far from his usual self. His lack of penetration with the ball has translated to a lack of runs as well, which has affected India significantly. Based on recent selection policies, it would seem that India is finally ready to look beyond Jadeja. READ: India vs Zimbabwe 2015: Visitors face batting order conundrum

India’s constant persistence with Akshar Patel seems to suggest that he is being groomed to take over Jadeja’s role. However, while Akshar might be a like-for-like replacement with the ball, his batting is far from international standard. In 17 ODIs, he has batted 11 times and scored a mere 54 runs at a meagre 7.71. Even India’s first-choice No. 11 Umesh Yadav averages more: 9.20. READ: Ambati Rayudu’s ton against Zimbabwe shows he can fit into the full strength Indian team with ease

On the other hand, Stuart Binny — who has got nowhere near as many chances as Akshar — has done remarkably well in every department. Binny currently averages exactly 30 with the bat and a mere 18.88 with the ball. READ: Bhuvneshwar Kumar: India’s unsung hero

Binny has already shown that on helpful surfaces he is capable of running through the opposition. Few have forgotten his freak spell of 6 for 4 in and against Bangladesh in 2014. He has also shown ability with the bat, first against England when he scored 44 in an ODI at The Gabba, and now in the two ODIs at Harare. READ: Re-living Elton Chigumbura’s against-the-tide innings

Given India’s current preference for playing with two spinners and three pacers, there could well come a situation in which both Binny and Akshar play together. This could make a lot of sense: Dhoni usually utilises the third seamer as a containment option rather than as a wicket-taker; Binny can perform this backup role. Ravichandran Ashwin and Akshar could play as specialist spinners (assuming India pick Akshar ahead of Harbhajan Singh) who can contribute a bit with the bat. READ: India tour of Zimbabwe 2015: Sending a second-string side has more pros than cons

However, if it comes down to picking one all-rounder in the side then Binny ought to make the cut by virtue of his current form and performances. India have been searching for a pace-bowling all-rounder for years. Binny is proving to be the answer to those prayers. READ: Indian cricketers to watch out for in tour of Zimbabwe 2015 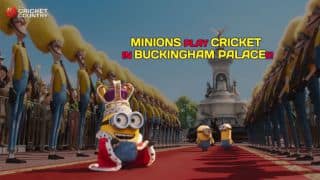