Stuart Binny entered the record books for the best ODI bowling figures by an Indian.

Stuart Binny grabbed a mind-numbing six for four against Bangladesh to help India win the match and seal the series in the second One-Day International (ODI) of the series. Shiamak Unwalla recounts each of the six dismissals.

Mushfiqur Rahim c Wriddhiman Saha b Stuart Binny 11(24): Binny started proceedings with a maiden over, and followed it up with a wicket-maiden during which he accounted for the in-form Bangladesh skipper Mushfiqur Rahim. The ball was actually not his best; it pitched around the leg stump, and Mushfiqur tried to work it away to fine leg only to see it loop up off his glove. Saha took an easy catch.

Mithun Ali c Akshar Patel b Stuart Binny 26(39): Debutant Mithun Ali was arguably the best batsman on display for Bangladesh, but his good form might have caused his downfall! He was timing the ball reasonably well, and looked to flick one on his pads to square leg. Unfortunately, he hit it so well that it was pouched by Akshar Patel at short mid-wicket.

Mahmudullah Riyad c Ambati Rayudu b Stuart Binny 0(1): Mahmudullah must have been supremely confident, even at that stage of the game. There is no other logical reason that explains why he would try to play what would have been an exquisite cover drive on the up had it come off. Sadly for him and Bangladesh, it did not. Mahmudullah ended up edging to slips, where Rayudu juggled it once, but ended up taking a very good reaction catch.

Mashrafe Mortaza c Wriddhiman Saha b Stuart Binny 2(5): Arguably the ball of the innings. Mashrafe Mortaza would be forgiven for getting out to that one. It was pitched up around off stump to draw the batsman forward; poor Mortaza had to poke at it, and the ball swung late to get the outside edge to the ‘keeper. It was a genuine out-swinger’s wicket and arguably the most attractive one of the lot.

Nasir Hossain b Stuart Binny 5(13): Binny’s fifth wicket came when Nasir Hossain, the last recognised batsman, tried to hit him away without moving his feet. The resultant inside edge knocked the stumps over.

Al-Amin Hossain 0(2) b Stuart Binny: Almost an action replay of the previous dismissal, Binny pitched it up and Al-Amin Hossain played a typical No 11 batsman shot. Feet moving nowhere, bat moving somewhere else entirely, and the sound of timber behind him. Binny finished with figures of 4.4-2-4-6 to establish himself in the record books. 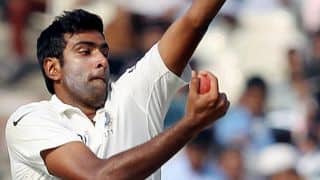 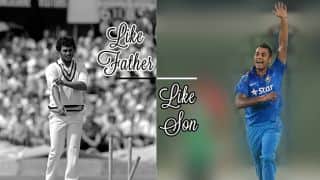