Stuart Broad's twin assaults on South Africa, with both bat and ball have excelled positive chances for England in the Test.

On a day that belonged to the bowlers, Stuart Broad‘s heroics with both ball and bat helped England hold an edge over South Africa going into Day 3. Broad’s blazing spell with the ball, and a raging batting display late into the English innings will only add to his list of brilliant Test performances. Vishal Mehra takes a look on how England’s fortunes are heavily dependent on Broad’s performances. Live Cricket Scorecard: South Africa vs England, 1st Test at Durban, Day 3

Stuart Broad was the star performer for England on Day 2, as the English batsmen struggled get connect their bats with the ball in the opening session of the match.  With Nick Compton and Ben Stokes at crease Broad would have sat relaxed and though hard about how he will bowl to the likes of AB de Villiers and Hashim Amla. But to his luck was not to be Broad came into bat with England 253 for eight, with more than one-third of a session until lunch.

Broad, who averages a mere 23.27 with the bat in Tests, dug in deep and faced the wrath of Morne Morkel, Dale Steyn bowling at express pace.  To Broad’s credit, he collected 12 runs, including two boundaries off Morkel, who had only given six runs in his opening spell picking up four wickets. Another bowler who felt the beating by Broad was Dane Piedt, who was smashed for 11 runs in the eight balls he bowled to him. LIVE CRICKET UPDATES: South Africa vs England 2015-16, 1st Test at Durban, Day 3

Broad almost run a-ball 32 (in 33 deliveries) went a long way in ensuring that England put up a competitive score on the board, one that would the South Africans under pressure.

Broad who was high on confidence after a good show with the bat, started with new ball. He struck in very first over of the South Africa innings, picking up Stiaan Van Zyl for two-ball duck. Broad having had his tail up, bowled an unplayable spell early on to skipper Hashim Amla, who looked in all sorts of trouble. Broad eventually picked him by getting an edge to wicketkeeper Jonny Bairstow. ALSO READ: James Taylor: England’s new crisis man

The lanky pacer was not finished after a fine demonstration on swing bowling. He was back to his best in the final session of play, getting the wicket of the hazardous AB de Villiers, who was looking to get past a fifty fell a run short in the end after teasing Broad on and outside the off stump over after over. De Villiers only managed seven runs from the 20 odd balls he faced by Broad.

With South Africa still 166 runs a drift from England, a lot will depend on Broad’s early morning spell with the conditions being conducive to fast bowling. Broad coming into this Test did not have a fairly good series against Pakistan managing only seven wickets in three Test matches. His non-contribution with the ball was the one of the main reasons for England’s defeat in the series. ALSO READ: Stuart Broad: England need to improve their use of DRS

Broad’s role in the next three days in the ongoing Test is a very crucial one if the visitors are to gain a 1-0 lead in the four-match series, boosting their chances of preserving their unbeaten streak in a Test series’ in South Africa for over a decade now. Broad needs to save his best for the remainder of the match. 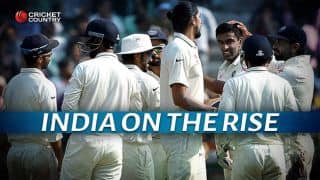