Subhash Gupte's rate of a five-for every three Tests is the best among Indian spinners.

Subhash Gupte, born December 11, 1929, was one of the greatest leg-spinners of all time. Arunabha Sengupta pays homage to the man who was ranked above Shane Warne by the great Garry Sobers.

Garry Sobers spent much of his time in the middle engaged in tantalising duels with the great Richie Benaud. That lends some redoubtable perspective to his statement that Subhash Gupte was the best wrist spinner he ever batted against. In his recent autobiography, however, Sobers went further by rating Gupte above Shane Warne.

Surprisingly, Sobers had not yet made it to the Test side when Gupte was weaving his magic in the West Indies, picking up 27 wickets in 5 Tests in 1952-53. These included 3 five-fors against Frank Worrell, Clyde Walcott and Everton Weekes at the peak of their phenomenal powers.

It was a fruitful tour for Gupte in more than cricketing sense. Apart from capturing 50 First-Class wickets in the tour, and being nicknamed “Fergie” after the West Indian leg-spinner Wilfred Ferguson, Gupte bowled a lovely maiden over as well. During the first match of the tour played in San Fernando, Trinidad, Gupte met his future wife Carol. Accompanying her Indian father to watch the game, Carol was entranced as the Indian leg-spinning wizard took 6 for 29.

Sobers had missed all that success on and off the field. Indeed, when he finally played against Gupte, it was during the unspectacular latter half of the spinner’s career. They met in the 5 Tests of the 1958-59 series in India and the left-hander amassed 557 runs at 92.83. West Indies won the 5-match showdown 3-0, and Gupte registered his worst ever average in a series. His 22 wickets were captured at 42.13 apiece.

Gupte misses taking all ten wickets in an innings

Even then, Sobers had been fascinated by the mastery of the leg-break bowler. Besides, the second Test had been memorable for both the men. Sobers had notched up 198 in the second innings, but Gupte had earlier taken 9 for 102 in the first, the best figures of his career. He could have taken all 10 if wicket-keeper Naren Tamhane had held on to the chance offered by Lance Gibbs.

The battle between Sobers and Gupte in the second innings was one of those immortal duels that make cricket the game it is. And although Sobers came out victorious, Gupte managed to earn the eternal respect of his formidable foe.

Let us not forget the constraints Gupte had to deal with right through his career. The likes of Mark Taylor, Ricky Ponting, Steve and Mark Waugh, Damien Martyn, Matthew Hayden, Justin Langer and Adam Gilchrist would pile up mountains of runs that would loom threateningly as the backdrop when Warne ambled in to bowl. Bob Simpson, Bill Lawry, Neil Harvey and Norman O’Neill often did the same for Benaud. Anil Kumble had the golden age of Indian batting creating the platform for him to run in and send across his poison-tipped deliveries. Even Bhagwat Chandrasekhar was helped by the likes of Sunil Gavaskar and Gundappa Viswanath in the line-up. In contrast, seldom did Gupte have a decent score on the board to bowl at.

Frequently, Gupte bowled against the likes of Sobers, Conrad Hunte and Rohan Kanhai, or Peter May, Colin Cowdrey and Ken Barrington on plumb batting wickets. His captains often set fields that eluded logic and snicks.

And his close-in fielders were unreliable, in their ability to hold a sharp catch, and allegedly in their willingness to latch on to a simple one. It is whispered that during the fifties, Indian fielders often pouched or grassed chances based on the zone the bowler represented. Shane Warne bowled with Mark Taylor, Mark Waugh, Ricky Ponting and Justin Langer crouching around the bat. Even the Indian spinners of the late sixties and seventies had the luxury of Ajit Wadekar, Eknath Solkar, Srinivas Venkataraghavan and Abid Ali to snap up sharp offerings. In contrast, much of the magic produced by Gupte vanished without a trace from the scorecards, registering little more than frustration.

A frail man, he nevertheless bowled with a classical high-armed action, the only characteristic oddity was the curious skip as he released the ball. He bowled long spells untiringly, and with his wrist being the propeller rather than his fingers, he never suffered from sore digits. Gupte combined metronomic accuracy with every variation of flight and spin, and also threw in the ability to turn the ball on the best batting tracks.

Sobers stated that Warne was far flatter through the air. Gupte mastered not only leg-break and top-spin, but also two different types of googly, one bowled with a lower arm. As he would also bowl the occasional leg-break with a lower arm, batsmen found him even more difficult to pick.

However, after he had reached his peak with 34 wickets against New Zealand in the 5 Tests of 1955-56, he came up against the Australian tourists the following winter. Neil Harvey and the others were eager to forget the nightmares of the Jim Laker summer and met the Indians with vengeance. Harvey was unable to spot Gupte’s googly early in the tour, and simply guessing that he would get one first ball, he dispatched them to the boundary. Gupte did not perform too badly, but 8 wickets at 32 was short of his exacting standards.

And after 2 Test-less years arrived the strong West Indians with Garry Sobers and the others plundering runs.

When India toured England in 1959, Gupte was the leading wicket-taker on the tour. But while the summer turned out to be warm and thus made to order for his bowling, his 17 wickets in the Test matches came at a disappointing 34.64 each. Chance after chance went down in the field, and the spinner, now a veteran in the side, rather uncharacteristically lost heart. Even then, Jim Laker had seen enough to rank him the best leg-spinner of his times.

After 3 mediocre Tests against Pakistan in 1960-61, Gupte was replaced in the Indian side by his younger brother Baloo – another leg-spinner of quality. The elder Gupte maintained that there was enough reason for them to play together. However, the selectors disagreed and Baloo played only 3 Tests in his career.

“Leg-spinners are wicket-takers and both of us were accurate. But due to the theory of the powers that were then, there was no place for two leg-spinners in the Indian team,” Gupte lamented later. “Even the West Indians touring our country in 1958-59 said that India should have played both me and Baloo, more so because I had no spin support since the exit of Vinoo Mankad. Baloo played against West Indies at CCI and got 8 wickets. They could not touch me because I had 94 wickets in 21 Tests before the start of the series and got 6 wickets in the first Test and 10 in the second (including 9-102 in an innings) with no support at the other end.”

The unfortunate end to a great career

Gupte was only 32 at that time, and seemed to have a lot of cricket left in him. But during the next Test at Delhi he got into trouble off the field.

A hotel receptionist complained of being harassed over the telephone by one of the Indian players. The call was traced to the room which Gupte shared with AG Kripal Singh.

Gupte was absolutely innocent, but lost his cool when it was suggested that he should have prevented Kripal Singh from bothering the receptionist. He subjected a member of the Board of Control for Cricket in India to a severe tongue lashing. “He is a big man. How can I stop him?” he asked.

“Nothing had happened,” Gupte reflected later. “Kripal had not raped the girl or assaulted her, he just asked her out for a drink.”

Soon after the incident, Gupte was informed that he would not be selected for the forthcoming tour of the West Indies.

He never played for India again. Mihir Bose, in A History of Indian Cricket, summed up the loss of Gupte best: “India’s first great spinner ended his career because he happened to share a room with a man who wanted a drink with a girl”.

Gupte finished with 149 wickets at 29.55 each — his average only second to Bishan Bedi among all Indian spinners with more than 100 scalps.

Although seldom mentioned in the same breath as the likes of EAS Prasanna, Bishan Bedi and Bhagwat Chandrasekhar, his strike rate was superior to these great spinners — a stupendous achievement given the fieldsmen and captains he had to deal with.  His rate of a five-for every 3 Tests is the best among the Indian spinners.

Indian spinners with more than 100 or more Test wickets

In First-class cricket, he claimed all wickets in an innings when he picked up 10 for 78 for Bombay against Pakistan Services and Bahawalpur.

Gupte played for Rishton in the Lancashire League between 1954 and 1957, and in 1956,  against Accrington, he claimed two hat-tricks in the same innings.

After the end of his Test career Gupte accompanied with his wife to her native Trinidad and lived there as a much-loved man till his death in 2001. 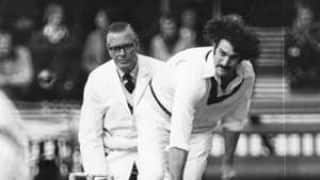