Sudangsu “Mantu” Banerjee: A man discarded for no reason

Sudangsu “Mantu” Banerjee: A man discarded for no reason

Mantu Banerjee was a medium-pace bowler from Bengal, thriving in the helpful conditions of Eden Gardens.

Born November 1, 1917, Sudangsu Mantu Banerjee was a talented swing bowler from Bengal. Abhishek Mukherjee looks back at a career that wilted away following a string of injuries.

Sudangsu Mantu Banerjee was a medium-pace bowler from Bengal, thriving in the helpful conditions of Eden Gardens, the land of swing bowlers have perennially done a magnificent job over years.

Eden Gardens was, in those days, was not as surrounded by concrete as it is now; the cool afternoon breeze blew across the ground, resulting in extravagant swing. It was these conditions that made Banerjee.

All of 5 11 , Banerjee bowled at a brisk pace, being particularly successful at Eden Gardens. He played a mere 26 First-Class matches over 13 years, claiming 92 wickets at 23.28; 16 of these (including his solitary Test, where he took five wickets) were at Eden Gardens, where he accounted for 69 wickets at 21.72.

Born in Calcutta, a 23-year old Banerjee made his First-Class debut against Bihar at Jamshedpur. He first made a mark against Madras at Eden Gardens in 1943-44 with 5 for 27 and 2 for 52.

His success came too late to earn him a slot in the 1946 tour of England or the 1947-48 tour of Australia. However, when Lala Amarnath s men were taking on Don Bradman & Co. Down Under, Mantu Banerjee claimed 3 for 47 and 7 for 50 at Eden Gardens against a star-studded Holkar: the opposition consisted of CK Nayudu, Mushtaq Ali, and Hiralal Gaekwad.

However, it was his 4 for 36 for East Zone against West Zone at Brabourne Stadium that did the trick: the wickets included those of Polly Umrigar and Vijay Hazare. With the series against West Indies levelled 0-0, India included Banerjee in the third Test at Eden Gardens. Making debut alongside him was Ghulam Ahmed.

John Goddard batted, and Banerjee struck in the first over, knocking back Denis Atkinson s middle-stump. He trapped Alan Rae LBW soon afterwards, and West Indies were 28 for 2. Banerjee moved the ball about at a good pace and speedily accounted for Rae and Atkinson, wrote Wisden.

Everton Weekes then added 81 with Clyde Walcott, 79 with Gerry Gomez, and 50 with George Carew before he hit one back to Ghulam for 162. Banerjee, having caught Walcott off Ghulam earlier in the day, caught Robert Christiani off his own bowling before stumps. Banerjee started the next morning in style, removing Jimmy Cameron with an in-swinger; Mushtaq took the catch at fine-leg. Ghulam rounded things off, and West Indies were bowled out for 366.

India, in response, reached 204 for 2 at stumps on Day Two (Rusi Modi and Hazare both scored fifties), but crumbled to 272 next morning. Banerjee was stumped off Wilf Ferguson s leg-breaks for a duck. He bowled Ferguson soon afterwards and caught Goddard off Amarnath, but Weekes slammed a quickfire 101. In the process he became the first overseas batsman to score twin tons in a Test in India; he also scored 5 hundreds on a trot a record that still stands.

Set to chase 431 in a day and two hours, India finished on 325 for 3 thanks to a hundred from Mushtaq (he had a fifty in the first Test) and fifties from Modi and Hazare. Banerjee never played another Test. Of the 8 men with 5 wickets and 3 catches on Test debut, Banerjee remains the only one to have played a single Test.

Banerjee continued to play till 1953-54. His penultimate season was also his most successful one, where his 26 wickets came at 18.19 (this included 7 for 66 against Bihar at Eden Gardens, 6 for 65 against Orissa at Cuttack, and 5 for 68 in the semi-final against Mysore at Eden Gardens).

The final at Eden Gardens was an incredible contest. Bengal reached 418 for 9 before Banerjee (with a career-best 31 not out) added 61 with Putu Chowdhury. Holkar reached 389 for 5 before collapsing to 496, acquiring the all-important 17-run lead. The major contribution of the Holkar innings came from BB Nimbalkar (219), who eventually fell to Banerjee. Bengal set Holkar 304, and Banerjee, bowling with fire, reduced Holkar to 12 for 2. Holkar recovered to 91 for 3, but wickets kept falling, and when stumps were drawn, they were left on 149 for 9. A solitary wicket stood between Bengal and the Ranji Trophy title.

He played against Orissa next season before bowing out with 2 for 88 against the touring Commonwealth XI at Eden Gardens, accounting for George Emmett and Sam Loxton.

A Bachelor in Arts, Mantu Banerjee worked as Assistant Secretary at Calcutta Corporation. He passed away at Calcutta on September 14, 1992 just over a month before his 73rd birthday. His son Rabi Banerjee also played Ranji Trophy for Bengal.

Having a philosophical attitude life is a Bengali trait, but Banerjee s philosophy towards life, cricket, and Hindu mythology is worth mention here. In a conversation with Madhav Apte, Banerjee compared life with cricket, for both are contests between good and evil: life that scores more good than evil wins.

Apte quoted Banerjee in As Luck Would Have It: The ball is coloured red, not any other colour. Why? Because red is attractive. A child picks up a red toy first. It is a red cherry of temptation with which the bowler tempts the batsman to succumb to temptation. [The] batsman, in turn, tries to hit temptation away. He often succumbs and get out. Victory of evil over good! He compared ten wickets to Vishnu s ten avatars and the crease as Laxman Rekha (a line that should not be crossed, as per Ramayana). He also defined the stumps as past, present, and future, and added that the bails formed the timeline connecting the three. Greater cricketers have graced the sport; but few as philosophical. 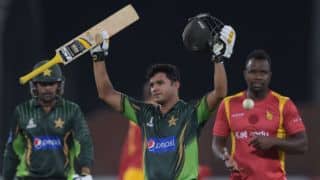