Sundries: Edward VII: The monarch’s deeds on the cricket ground

Sundries: Edward VII: The monarch’s deeds on the cricket ground

King Edward VII ruled United Kingdom and the British Dominions from 1901 to 1910, lending his name to that period of history.

King Edward VII, born November 9, 1841, ruled United Kingdom and the British Dominions from 1901 to 1910, lending his name to that period of history. Arunabha Sengupta looks at his rather disappointing forays on to the cricket ground.

Before the long, long reign of the current Queen Elizabeth made Charles, Prince of Wales, the longest-serving heir apparent to the British throne, his great-great-grandfather Edward held the record.

In fact, Edward did not get to the throne till he was 60, already past the average life-expectancy of that era. The good life he very openly enjoyed led to doubts both regarding his abilities as King and how long he could manage to live and rule.

Treated with kid-gloves by his domineering mother, kept away from domestic and international politics for much of his formative years, Edward was known to enjoy country house parties, illegal card games for money, hunting, horse racing, tweeds, Homburg hats and Norfolk jackets. He was not really a King the populace put a lot of hopes on. His 48-inch waist did not help matters, and his weakness for roast beef and potatoes with horseradish sauce and Yorkshire pudding did not help his waistline. And then there were the mistresses.

However, in the end his reign proved more successful than expected. Although the Great War would break out four years after his death, Edward was known as The Peacemaker. He was also recognised as the first truly constitutional British monarch. Besides, he was lauded for his tact and for recognising, respecting and encouraging brilliance.

Way before he had put on the crown, and several years before the waist had expanded to such generous proportions, Edward had put on his pads and walked to the wicket. The young Crown Prince did take part in a couple of rather serious cricket matches, albeit with rather meagre results.

Both these matches were for I Zingari, and took place during the course of two days in the summer of 1866.

In 1862, the Sandringham Park House in Norfolk was purchased by Queen Victoria on the request of Prince Edward as a home for himself and his bride Princess Alexandra.

The construction of the red brick house of mix styles was still continuing when the country house cricket matches of 1866 were held.

The Gentlemen of Norfolk played I Zingari; the latter team, amidst dignitaries like the Crown Prince himself, a horde of Lords and Viscounts, also had the august presence of Robert Allan Fitzgerald. Yes, the same famous MCC and Middlesex cricketer, who would lead WG Grace during the tour of North America a decade later.

There was also the underarm fast bowler Henry Arkwright, a man who played for MCC and the Gentlemen of England. The team also boasted other First-Class cricketers in the forms of Edward Stanhope and Tony de Grey.

It was, hence, a mismatch of a game. Arkwright picked up 8 wickets as the Gentlemen of Norfolk were bowled out for 119.

In response, Edward opened batting for I Zingari and was bowled for a duck by Charles Wright. However, Fitzgerald hit 101, Edward Bootle-Wilbraham, the Lord Skelmersdale, struck 52, and the I Zingari amassed 277.

When the Norfolk Gentlemen batted again, Arkwright captured 8 more wickets and even though an extra man was allowed to bat for the side, they managed just 60.

With the match ending early, another fixture was arranged on the second day. The Sandringham Household, comprising of 22 of the good souls who kept the property together, took on I Zingari.

There was no time for a complete match, and hence it was agreed to be played till both the sides had completed an innings each. Sandringham Household batted first and struggled against the rather decent attack. Arkwright picked up 7 more wickets, de Grey 13. The 22 men together amounted to 88.

De Grey now opened the innings with Viscount Royston and hammered 65. The Prince walked in at two-drop and managed to score 3 before his stumps were rattled by a bowler called C Cole. Late in the order Fitzgerald hit 37 and the innings came to an end at 184. 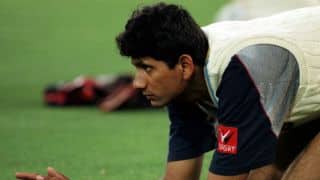