Traditional cricket is not supposed to be played in whites not unless there is a very specific window of traditionalism.

No, traditional cricket is not supposed to be played in whites. Not unless there is a very specific window of traditionalism. Arunabha Sengupta looks at the way cricket dress has evolved through the years.

Whenever cricketers forsake their whites and turn out, under lights or otherwise, to ply their trade in colours, the same monotonous drones of the traditionalist are heard.

However, although the aim is to sound like a traditionalist, these very complaints also underline the problems with myopic views of history. One s adherence to viewing through one s own window of time is necessarily a shallow and ineffective pursuit, not by any means an endeavour to know history.

If one is not prepared to look back and find out whether cricket was really a gentleman s game (it never was, it was always full of skulduggery) or whether it was always meant to be played in whites (as we will see it was not) the complaints end up being superficial, meaningless and irritating much like the chatter of old maids.

In the eighteenth century, when the game was being formalised for the first time, people played in three-cornered or jockey hats, often with silver or gold lace. They wore shirts which were generally frilled, nankeen breeches, silk stockings and buckled shoes. The Hambledon Club had sky-blue coats with buttons engraved with the letters CC. The first uniform of MCC was not red-and-yellow, but azure blue. The uniforms, mind you, were not blazers. They were what the men wore on the field while playing.

Trousers started to replace breeches during the second decade of the nineteenth century. But traditions, even non-white-flannel traditions, die hard. Eton and Harrow continued to play in breeches till 1830. Cricketers generally took field in tall beaver hats in black or white.

The frills disappeared from the shirts and they were worn with high collars and spreading bow ties. Sometimes shirts were forsaken for singlets. Wide braces were also noticed, especially popular among the professionals. Belts with metal clasps were worn around the waist. Everyone on the ground wore black Oxford shoes during this period of the first half of the nineteenth century.

Towards 1850, the tall hat began to give way to a soft and full flannel cap, generally white or, less frequently, a straw hat. The straw hats were often of a haymaker s shape. Short white flannelled jackets had made their initial appearance in 1812, and continued to appear through this period. The flannelled jackets were the forerunners of the blazer. It was later that Tom Lockyer, the Surrey wicketkeeper, became the first to sport a cricket coat.

From 1850 to 1880 various changes did take place. I Zingari was established in 1845. Under them cricket colours began to appear. At first ribbons were used round the white bowler hats that were busy replacing the tall hats and the straw hats.

It is not known when Eton had their first light blue caps; perhaps from 1831. The Rugby side were habited alike in 1843. But caps came into vogue from the 1850s. Winchester XI wore their blue school caps from 1851 while Harrow donned their striped caps from 1852. Cambridge seems to have worn their blue caps from 1861 and Oxford from 1863.

By now shirts were coloured, and the pattern of colours in the shirts were used as uniform. They could be spots, stripes or checks with a white background. The All-England XI played their matches in white shorts with pink spots. When Peter Wynne-Thomas, the famed Nottinghamshire cricket historian, wrote the biography of William Clarke, the cover was designed in white with pink dots to commemorate those colours.

The Oxford and Cambridge XIs wore dark and light blue shirts respectively, and the Harlequins, founded in 1852, wore blue trousers.

In 1862, the Lady Margaret Boat Club of St John s College, Cambridge adopted scarlet coats, and that presumably was called blazer for the first time. In 1863, the Oxford XI wore blue blazers.

The shoes worn till that time progressively gave place to boots. They were either brown or white with brown straps.

It was only between 1880 and 1895 that coloured shirts disappeared. White shirts with starched or semi-starched fronts became the rule. Ties were worn, though infrequently, but small bow-ties in low turned-down starched collars were common enough. It was only in 1882 that white buckskin boots were worn, and gradually replaced the boots.

In 1884-85, the Shaw and Shrewsbury s side to Australia wore blazers and caps to match.

The modern cricket sweater was possibly an evolution of the singlet.

So, it was only towards the end of the 19th century that the cricket dress was formalised and started looking like what is termed traditional dress today, after a century of fiddling around with colours and make.

Down the years, soft white hats in felt and linen, county caps, and rubber-soled boots appeared, as did sleeveless sweaters.

The umpires white coats evolved early enough, as far back as in 1861. However, as late as in 1882, there would be men officiating in tall hat or billycock and black coats.

And as we know, down the lines the helmet, coloured clothes, spikes, skin-suits and fancy sunglasses came into the cricketing world.

But, as you can see from the piece, white clothes were never the traditional way cricketers used to dress up. A hundred years and a few decades ago, a cricketing scene was as colourful as the modern limited-overs game. 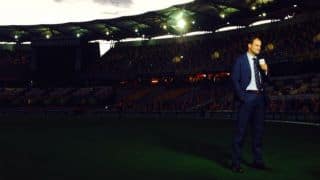