Martin Donnelly was scoring as freely as ever for Warwickshire against Middlesex when he was dismissed in the oddest of fashions.

August 30, 1948. Martin Donnelly was scoring as freely as ever for Warwickshire against Middlesex when he was dismissed in the oddest of fashions. Arunabha Sengupta digs into the dismissal which has been recorded simply as bowled .

Those were the glorious days of Denis Compton and Bill Edrich. 1947 had been their annus mirabilis. They were going great guns in the following season as well.

It was the last match of the season for the sides, and Edrich hammered the beleaguered Warwickshire attack all over the hallowed turf of Lord s to score 122. Compton delighted the post-War rationing ravaged Londoners with a scintillating 84. After The Ashes had witnessed resounding Australian triumphs, these deeds did a lot to brighten the day for the spectators.

The Middlesex side put up 379 during the course of the first day, in spite of the 6 wickets claimed by Eric Hollies. Just about two weeks earlier, Hollies had famously bowled Don Bradman for a duck in the latter s final Test innings, and the leggie was riding high on confidence.

From the second morning the Middlesex spinners, Jim Sims with his leg-breaks and Jack Young with his slow left-arm orthodox, got at the Warwickshire batsmen. Only the classy left-hander Martin Donnelly resisted with 35 as the rest of the innings wilted to 110 from just 39.2 overs.

Middlesex skipper Frank Mann had no hesitation in asking the visitors to bat again. Sims and Young were soon at them again, but this time the visitors put up a much improved show. Especially during a fascinating partnership of 147 for the third wicket between Donnelly and the Northumberland recruit Jim Ord.

However, just as the two were on the verge of taking Warwickshire to safety, a chancy dismissal turned the match fully in favour of the hosts. Young was bowling and his tossed-up delivery hit Donnelly on the boot. As a result the ball lobbed over his head and travelled in an arc over the wicketkeeper Dick Spooner. And then in landed in one of the footmarks of the Middlesex medium-pacer Laurie Gray. Having done so, it ricocheted off that uneven surface and shot back to hit the wicket.

So, in effect, the ball had gone off the batsman s toe, hit the ground and then the wicket. Hence, as bemused fielders appealed, the umpire had to nod in assent. Donnelly was bowled for 55, perhaps the most unusual of dismissals.

Sims and Young, aided by the Chinaman bowling of Compton, quickly ran through the rest of the innings. The Warwickshire innings ended at 288 on the third morning. Middlesex knocked off the small target for the loss of just one wicket. 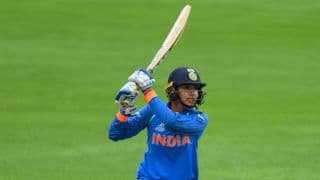