During his time, Gavaskar was a colossus of world cricket.

Many of today’s generation who have grown up lauding Sachin Tendulkar does not realise that before him was a man who was colossus in world cricket. In fact, Tendulkar – like many of his generation – grew up idolising Sunil Gavaskar.

H Natarajan lists some of the many firsts that Gavaskar notched in his incredible career:

1.        Sunil Gavaskar is the first  of the two batsmen to score a hundred and a double hundred in a single Test of a debut series. Lawrence Rowe later emulated Gavaskar’s feat. Only five other batsmen have achieved the feat in a non-debut Test series.

4.        Sunil Gavaskar is the first of two batsmen to score centuries in each innings of a Test thrice — Ricky Ponting is the other. But unlike Ponting, one of Gavaskar’s twin hundreds in a Test was double century.

5.        Sunil Gavaskar is the first batsman to score 1000 runs or more in a calendar year on four occasions. Since then, Sachin Tendulkar has crossed the four-figure mark in six calendar years, while Brian Lara, Matthew Hayden, Jacques Kallis and Ponting have achieved the feat in five calendar years each.

8.         Sunil Gavaskar is the first of the three Indians to carry his bat through an innings when he stood defiantly scoring 127 against a rampaging Imran Khan, supported by Sarfraz Nawaz, Sikander Bakht and Abdul Qadir. Virender Sehwag and Rahul Dravid later accomplished the feat against Sri Lanka and England respectively.

9.         Sunil Gavaskar is the first batsman in Test history to score 30 hundreds. He scored 34 in all, which is has since been bettered only by five batsmen — Sachin Tendulkar, Jacques Kallis, Ponting, Dravid and Sangakkara.

10.      Sunil Gavaskar remains the first and only batsman to have scored double-hundreds in the first, second, third, and fourth innings of Tests.

11.     Sunil Gavaskar is the first batsman in Test history cross 10,000 runs. Gavaskar’s run-tally is still the 11th highest in Tests. 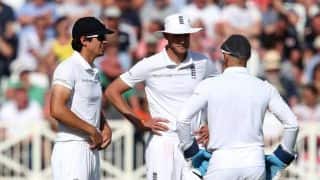