Kapil Dev was honoured at the same place where he was denied extra food decades back.

Mumbai, Jan 17: Which captain is idiotic enough to drop his greatest match-winner? Whatever else I may be, I am not an idiot, told Sunil Gavaskar at Cricket Club of India (CCI), Brabourne Stadium Tuesday night. Gavaskar was referring to the axing of Kapil Dev for the Eden Gardens Test of 1984-85, against England. Gavaskar added that he was carrying an article in print, where Hanumant Singh, then Chairman of Selection Committee, had specifically mentioned that the decision was not Gavaskar s. He even added that he was as much culpable as the other five members and took collective responsibility of being in the committee that dropped Kapil.

Gavaskar also mentioned that he had sent Kapil a copy of the article as soon as the article had come out, putting a rest to a controversy that had divided Indian cricket media and fans for over three decades.

For the uninitiated, both Kapil and Sandeep Patil were dropped for the Calcutta Test after getting out to rash shots that had resulted in an Indian collapse at Delhi. Gavaskar was blamed till yesterday for Kapil s axing, and was greeted in Calcutta with chants of NO KAPIL NO TEST.

He was the greatest match-winner India ever had, Gavaskar added: It was an honour to play alongside him. He even went to the extent of saying that Nobody in India has turned around as many matches as Kapil.

Earlier, Gavaskar had started his speech with the words It gives me great pleasure to be in the induction ceremony of Kapil. For whenever there is question of Kapil Dev and me, they say, Sunil is only there to drop Kapil Dev .

Kapil was equally complimentary: Was he the best in the game? No. But he was the best for the game There is nobody in this country who has not wanted to become Sunil Gavaskar at some point of time Lot of people may come and go but his name will be right there at the top.

The Legends Club inducted Kapil Dev as their seventh member last night, also felicitating Gavaskar in the process. Founded fourteen years ago by Raj Singh Dungarpur, The Club began with three inductees the late Vijay Merchant, Vijay Hazare, and Vinoo Mankad (whose son Rahul was present at the event). Over time, Gavaskar, badminton champion Nandu Natekar, and Sachin Tendulkar were all inducted. Kapil was the seventh.

The venue was fitting, for it was here in Brabourne Stadium that Keki Tarapore had denied Kapil extra food during a coaching camp. When Kapil insisted that he needed more he was a fast bowler, after all Tarapore responded with there are no fast bowlers in India.

There were anecdotes, many of them. He went back to the 1979 tour of England, where the cricketers were given a daily allowance of 7. He added how desperate they were to save 2 out of that for shopping, to get something for our girlfriends

This meant they had to wash clothes by hand. Of course, till then he had never washed his clothes himself, but roommate Jimmy [Mohinder Amarnath] came to his rescue.

Let me take the liberty of translating this as a passage instead of going word-by-word.

I don t know England have tubs in every bathroom, they never had water, definitely no hot water! Anyway, I had to remove the red marks from my white trousers after I kept shining the ball all day. So Jimmy asked me to fill the bathtub with water, immerse the trousers in the water, add Surf [a detergent], and leave it overnight or all day. So I kept it all day. I washed them when I returned to my room that night. The trousers became clean, but as for my hands, after hours of scrubbing I could not bend my hands to bowl next morning!

As he held them up in plain view, the crowd broke into cheers, for four years after he had worn his finger off by washing clothes, he would win a World Cup in the same country.

He was aware of the jokes about his accent, and was completely at ease with the situation. When someone asked him to speak in Hindi or Punjabi, the response was prompt: I put in so much effort all these years to learn English, and you want all that to go waste?

He mentioned his nerves about having to speak in English for the first time to foreign media, in New Zealand in 1980-81. Gavaskar, the captain, had sent Kapil to address the press.

But Gavaskar was having none of it: They will pay you money.

So Kapil went, reluctantly. That helped him do away with the initial jitters. My vocabulary improved after that

But not everything changed overnight. Sometime later, a journalist of The Hindu approached him for an interview in Delhi. For the uninitiated, the affinity of The Hindu for the purest form of English is well-known.

After a minute s conversation Kapil asked to be excused: Can I come back?

When the unsuspecting journalist agreed, Kapil quietly sneaked away with a friend for a movie just to avoid speaking in English.

Kapil also mentioned how big Bombay cricket was when he grew up: I was from a small town [Chandigarh]. I tried to impress Bombay people, media, cricketers; I had to impress everyone even my wife [Romi] was from Bombay

He recalled a conversation between Romi and her grandfather:

Grandfather: Ladka kya karta hai? [What does the boy do?]

Grandfather: Woh to theek hai, par karta kya hai? [That s fine, but what does he do?]

The rest got drowned in tumultuous cheer.

When they we calmed down, he continued. This time the voice was sombre: There were so many great cricketers in Bombay that you would always find someone to help you. It was not the same case in small towns like Chandigarh, where we played because of our passion for the game. We were not taught the grammar of the sport. Coming here meant we could have tea with our heroes.

Just when it seemed the evening would take a serious turn, Kapil broke the ice: My English is running out. You know, my grammar is the worst. Of course, without grammar I played a little bit of cricket

There was a pause, before the entire crowd joined into a standing ovation.

Gavaskar mentioned his days with Kapil, of the advantage of having Kapil in the side. He recalled the Melbourne Test of 1980-81, where Australia, chasing 143, were 24 for 3 at stumps on Day Three.

Kapil could barely walk we just pleaded him to have a go for another 5-7 overs and the rest is history.

For the uninitiated, Kapil took painkilling injections to bowl unchanged the next morning. He took 5 for 28 from 16.4 overs to bowl out Australia for 83.

Gavaskar continued: Many in internet generation believed that India had started winning overseas only in 2000. We won several times before that.

Was there a hush? No, must have been my mistake

We drew that series in Australia and the next series as well. We beat England in England 2-0. It could have been 3-0 if not for the English umpires. When the British umpires erred it was always called human error, but if the Indian umpires did the same thing they were called cheats or The Butcher of Mumbai.

The last not-too-honourable moniker was dished out to umpire KB Ramaswami after the Bombay Test of 1981-82.

There was another incident that dated back to India s 1978-79 tour of Pakistan. The hosts lashed out with the choicest of sledges in Punjabi, and the Punjabis in the Indian team lashed back. It was all in good humour, but the entire thing left Gavaskar confused.

The following conversation ensued at lunch (I am translating this from Hindi):

Gavaskar: What were they saying?

Kapil: Oh, they were swearing.

Gavaskar: I got that bit, what exactly were they saying? Why were they mentioning pad so frequently while swearing?

It took some time for them to explain Gavaskar that the Punjabi word for behen (Hindi for sister) was extremely similar to pad . Then it dawned upon The Little Master.

Unfortunately, typing out the Punjabi word in Latin font is beyond the scope of either me or the alphabet or both.

Gavaskar also mentioned Kapil s tremendous enthusiasm. He mentioned incidents of play being held up when people walked in front of the sightscreen. The three of us Kiri [Syed Kirmani, wicketkeeper], Vishy [Gundappa Viswanath, second slip], and me were surprised to see Kapil running towards the screen.

Kapil had apparently been too keen to have a go at the batsman. He could not hold his enthusiasm anymore. It was hard to stop Kapil, Gavaskar recollected his failure whenever he tried to explain Kapil that a fast bowler needs to conserve energy.

The evening ended amidst loud cheers. Apte and Contractor were both generous in their compliments, but the biggest compliment of the evening from Rahul Mankad: I never saw my father play, but if he can be compared with Kapil he must have been a great player.

As evening turned into night the two men left, entertaining selfies and autograph-hungry fans by the dozen. They left behind anecdotes and memories. They also helped quash a dispute that had haunted Indian cricket for decades. 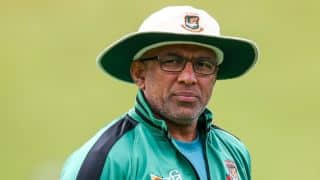