Suzie Bates, the 25-year-old gifted all-rounder from New Zealand, though is an anomaly. Unlike most other cricketers in the women's game, the tall and powerfully-built Suzie can play power-packed shots at will. 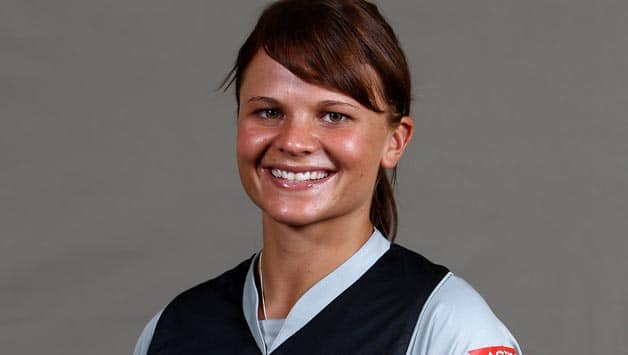 Unlike in the men’s game, a game of women’s cricket doesn’t usually involve a slew of big, muscular cricketers whose members wield the willow like a bazooka to blitzkrieg opposition ranks. As women’s cricket still retains the subtleties and innocent charms of a vintage bygone era, it can captivate the imagination of a connoisseur, and makes for some alluring viewing.

Suzie Bates, the 25-year-old gifted all-rounder from New Zealand, though is an anomaly. Unlike most other cricketers in the women’s game, the tall and powerfully-built Suzie can play power-packed shots at will.

The current captain of ‘White Ferns’, Suzie was born in the second largest city in South Island of New Zealand called Dunedin. The precociously talented all-rounder came into prominence with a string of fine performances for Otago women in the state league in the 2005-06 season.

The innings that brought Bates into limelight was her believe-it-or-not knock of 183 of a mere 152 balls against Auckland women in 2005-06. The whirlwind innings against Auckland was an epoch-making moment in her fledgling cricketing career. At the fag end of the summer season in 2005-06, the 18-year-old prodigy from Dunedin was picked to play for New Zealand against formidable India in a one-day series at home.

In her first one-day series itself, Suzie left an indelible mark on New Zealand’s cricket cognoscenti with an eye-catching half-century in the last match of the series. She also picked crucial wickets in that series.

In the subsequent quadrangular one-day tournament held in India, she anchored New Zealand to a stunning victory against the hosts with a soul-lifting century. In the game against England, her remarkable all-round performance floored them into submission. New Zealand’s coup de maitre of opening the batting with Suzie gave that much needed fillip to their batting line-up. In fact, she brought a whiff of fresh air to New Zealand’s cricket.

In the 2009 50-over cricket World Cup held in Australia, Suzie played a significant role to take New Zealand to the final of the tournament. In that tournament, with unflappable temperament, she guided New Zealand to a facile victory against India. Her four-wicket haul by bowling medium pace proved to be the telling difference in their match against South Africa.

Suzie’s best performance of that tournament though, came against Pakistan. Just like a turbo-charged engine, she smashed Pakistan’s hapless bowlers all over the ground and played a swashbuckling knock of 168. Her thrill-a-minute innings helped New Zealand to confirm their place in the final of the ICC Women’s World Cup 2009. Sadly, New Zealand lost to pre-tournament favourites, England in the final.

By 2011, Suzie was offered the chance to captain New Zealand’s cricket team and that is when she finally thought of fully concentrating just on cricket. It resulted in basketball taking a backseat.

On her appointment as captain, Suzie said, “When the captaincy came up I was like, yes, I am going to give it a good crack, with the World Twenty20 in Sri Lanka and the World Cup here. I just put the basketball on the side. It has made me enjoy my cricket better as I came fully prepared, practising consistently rather than playing basketball one day and then doing nets practising my skills. This has been the longest time I have focussed on cricket. Once I accepted it, it has changed my mind. Being a leader and getting the team to commit, I can’t be seen doing my own thing and have to commit fully to the programme. I am loving the challenge. Now that I have experienced captaincy, I don’t know how you play without doing it.”

Suzie, who admired champion batsman Sachin Tendulkar and New Zealand’s talismanic all-rounder Chris Cairns during her childhood days, always seemed to be more passionate about playing cricket. No wonder, she chose cricket over basketball. However, Suzie still maintains that she likes basketball too. It is just that she perhaps likes cricket a little bit more.

In the recently concluded 50-over cricket World Cup held in India, New Zealand finished a disappointing fourth. But Suzies’s wondrous deeds as a cricketer continued to shine like a beacon. She made 407 runs at an impressive average of 67.83 and took four wickets in the tournament. She was rightly adjudged, as the Player-of-the-Tournament. The essence of the way Suzie plays can be encapsulated by her pugnacious knock against England in the Super Six encounter of the ICC Women’s World Cup 2013. Her fine knock of 79 included an eclectic mix of debonair pulls, crunching cuts, drives and huge heaves over the mid-wicket region, especially when facing up to Colvin and Brindle. Bates also occasionally used her feet to spinners to play sparking shots down the ground. The strapping batswoman’s invaluable experience of playing basketball helped her to combat alien conditions at the Brabourne Stadium with indefatigable stamina.

Unfortunately, the enterprising partnership between Suzie and Amy Satterthwaite in the match against England went in vain, as New Zealand lost a cliff-hanger of a contest. To make it worse, it turned out to be an inconsequential encounter with West Indies and Australia having already qualified to play the final. However, cricket pundits showered lavish praise on Suzie for her Kiplingesque kind of equanimity and courage at the crease.

When we talk about Suzie, lest we forget that she is an Olympian too. Bates belongs to a select group of sportspersons who have represented their country in two different sports. In 2008, the superwoman represented New Zealand in the Olympics in the basketball event.

The gifted athlete from Otago is a fine Olympian in her own right, outstanding cricketer, successful cricket development officer of New Zealand and graduate in physical education and marketing. In short, with a tunnel-visioned aim, Suzie has soared towering peaks where not many have dared to go and done things that not many have dreamt of doing. Suzie is well and truly a woman extraordinaire.