BCCI has been accused of responding to Prime Minister Narendra Modi’s clarion call.

The Board of Control for Cricket in India (BCCI) has been accused of responding to Prime Minister Narendra Modi’s clarion call of Swachh Bharat Abhiyan. Humjee Break-Sheikh, present at the investigation, has more…

In news that broke out this morning, the Central Bureau of Investigation (CBI) reported that there has been a raid at the BCCI headquarters following Mohit Sharma’s shin injury. There have been allegations that Mohit’s injury was an outcome of an attack of certain BCCI and Indian team members.

“Given his form at Kochi it was perhaps just what the doctor ordered,” announced the Indian Team Director’s booming voice, “we had realised something had to give. Unfortunately, we did not realise people will take things this seriously. It seems like someone pulled the odd one back. When I asked them to throw the kitchen sink one of the boys seems to have taken it literally.”

But why was this done? All fingers point at the fact that the Indian team had responded well to Swachh Bharat Abhiyan (Clean India Mission) initiated by Indian Prime Minister Narendra Modi on October 2, 2014. There was also overseas support from Graham Gooch and Andy Flower with their sweeps and reverse-sweeps, but the Indian cricket team seems to have taken things a bit too seriously.

“He averages 46.12 with the ball in ODIs,” said a BCCI official, “so I do not think he will be missed for the rest of the series. However, there needs to be someone to mop up the tail with efficient ease as a part of the Abhiyan. Who will it be?” He asked the media before putting his greasy plate below the gaping hole in the kitchen.

(Humjee Break-Sheikh eats, drinks, breathes and lives cricket. Unfortunately, he does not believe in social media) 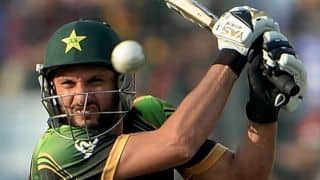 Should Shahid Afridi bat up the order? Mitchell Johnson should be used only when a series win is dependent on him: Dean Jones