It all amounts to one day. All the hard-work and painstaking practice sessions come to nothing, if they are not able to pull off a win in the final at Eden Gardens, Kolkata in the T20 World Cup 2016. West Indies have done everything right except taking Afghanistan lightly and falling on their heads with hands behind the back. But there is one person who they will desperately miss in the finals — Sunil Naraine. He has been one of the most economical and wicket-taking bowlers in recent times in T20 format. His form has been a highlight of Indian premier League (IPL) for Kolkata Knight Riders (KKR). He knows the pitch at Eden Gardens quite well as it is KKR’s home ground. His services would have worked wonders for the team from the Caribbean seeing the record under his belt at this ground.Full Cricket Score: England vs West Indies, T20 World Cup 2016, Final at Kolkata

West Indies would have been in a better position before the match if Narine had not pulled out of the T20 World Cup squad along with big hitter and all-rounder Kieron Pollard. Though, Samuel Badree has emerged as a life-saver for West Indies picking up wickets and a economy rate to die for. But Narine is well aware of the pitch conditions and would have known beforehand on what length to bowl to extract ample spin deceiving the batsman.Turn and bounce can be expected from Eden Gardens’ pitch which will make English batsmen struggling to connect. ALSO READ: England vs West Indies, T20 World Cup 2016, Final at Kolkata: West Indies’ likely XI

Samuel Badree is No.1 T20I bowler for the time being but he would have really befitted with Sunil Narine by his side, bowling from other end and sharing his experience of the pitch with him. Sulieman Benn has been in decent form throughout the tournament maintaining a commendable economy rate but Narine would have been the difference between the sides in the finals. As a matter of fact playing three spinners against England would have been a game-changer as West Indies have enough backing of fast bowling all-rounders in their team to give them 8 overs out of 20. It would have made life very difficult for in-form Jason Roy, Joe Root and Jos Butler. 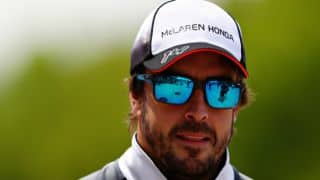 Fernando Alonso ruled out of Bahrain Grand Prix due to injury