Shamsi along with veteran leggie Imran Tahir are the spin options in the Proteas squad.

Tabraiz Shamsi was ecstatic after he was included in South Africa s 15-man squad for the 2019 ICC Cricket World Cup that was announced on Thursday. The left-arm spinner, who last played an ODI against Sri Lanka at Port Elizabeth in March this year, along with veteran leggie Imran Tahir are the spin options in the Proteas squad.

“So sooooo thankful for this opportunity… thank you to those who have shown faith in me ?? …not happy just to be going there to take part… going there to fight and bring back the cup for our country,” the 29-year-old wrote on Twitter immediately after the squad was announced.

South Africa went with experience over youth as veteran batsman Hashim Amla pipped Reeza Hendricks in an otherwise expected squad picked for the global showpiece event that begins in England on May 30.

Amla, who has scored more than 18,000 runs international cricket, was a doubtful inclusion due to his inconsistent form. In the end, the selectors decided to go with the 36-year-old over the much younger Hendricks, who has played only 18 ODIs. 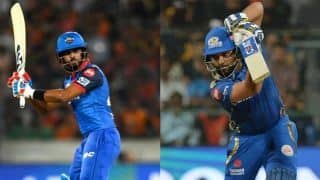 Today's Best Pick 11 for Dream11, My Team11 and Dotball - Here are the best pick for Today's match between DC and MI at Feroz Shah Kotla 8pm