Tarot reader Shruti Chopra is back again with her tarot predictions! She will be there right through the ICC T20 World Cup 2012 to give CricketCountry.com readers tarot card predictions of each and every match in the championship. In the below piece, she dwells into the Bangladesh-New Zealand game on Friday. 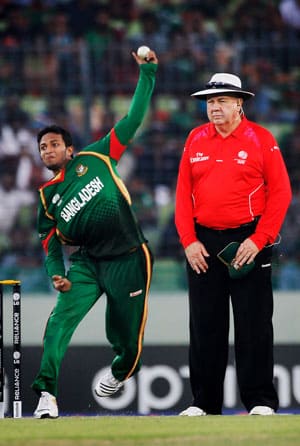 Tarot reader Shruti Chopra is back again with her tarot predictions! She will be there right through the ICC T20 World Cup 2012 to give CricketCountry.com readers tarot card predictions of each and every match in the championship. In the below piece, she dwells into the Bangladesh-New Zealand game on Friday.

Tower – the unpleasant card of self-destruction is looking to haunt the Bangladesh team. The reasons vary from unrealistic performance expectations to just moments of inconsistency as indicated by the Three of Wands. Their team management will provide them with the right support and ideas, but the team will show lack of implementation in many areas, including fielding. Their batting is graced with the Eight of Pentacles which does reward them for their hard work. Team work will be key as relying on individual brilliance will make it a tougher day for them.

Captain Mushfiqur Rahim, like the Ten of Cups, will be eager for his team to come together, but he will need to be watchful of risky decision making which could backfire. The Four of Cups represents an important opportunity to display strong batting skills, but he will need to block out verbal banter from the opposition.

Shakib Al Hasan is like the Chariot – strong and economical with the ball and ready to get on top of the opposition.

Tamim Iqbal will score a flurry of runs, but the Seven of Cups represents confusion, which will mean an eventual loss of momentum for him.

Mahmudullah will be aggressive with the bat, but will find it difficult to fulfill his responsibilities as an all-rounder.

Shafiul Islam drew the Knight of Wands and the Wheel of Fortune – both cards represent positive and attacking batting display. He will need to be directed well to make best use of the momentum achieved.

Mohammad Ashraful, like the Seven of Pentacles, will have a strong and fortunate start with the bat, but he will be unable to maintain this.

If Bangladesh have drawn trouble in the Tower card, then New Zealand are not far behind. They drew the Ten of Swords and Two of Pentacles representing their own set of problems of being rusty and negative. Luckily, New Zealand are blessed with stronger team work and better partnerships seeing them through as represented by the Lovers card. They will need to be careful with their fielding despite some moments of brilliance.

Three & Four of Wands represents Ross Taylor to be an insecure captain but he is also blessed with a team that will come together to back him up. Despite a balanced approach Taylor will find it tough to capitalise on his sensible batting start.

Brendon McCullum, like the Ace of Pentacles, and the Sun will take risks in his batting and play an attacking game.

Jacob Oram will bowl well, but the Seven of Swords advises him to simplify his plans to gain better results otherwise he will end up being expensive.

Martin Guptill will have some of his weaknesses exposed, but this should not matter much as the Emperor represents a strong and wise batting day for him.

Daniel Vettori will initially be aggressive and well directed. He should be weary of a strong counter attack from the opposition.

Kyle Mills will have a good day, especially with the Moon and Three of Pentacles displaying his ability to get on top of the opposition.