Former cricketer, film actor, dancer and BJP leader Sreesanth has now thrown in his towel hat in yet another ring – this time, into the hottest race in the world.

Former cricketer, film actor, dancer and BJP leader Sreesanth has now thrown in his towel hat in yet another ring – this time, into the hottest race in the world. No, we are not talking about the US presidential elections. The Kerala speedster has applied for the job of coaching the Indian cricket team. The contest, which has seen as many as 59 applications until now, has generated dizzying levels of hype.

“Yes it is true. The BCCI may have banned me for life from playing the game, but to the best of my knowledge, it has never imposed any sort of ban on coaching. So why not? I would absolutely love to coach Dhoni and co. Under my watch, Kohli’s already burning aggression will just explode. Adipoli mone!” an excited Thiruvananthapuram BJP leader told The UnReal Times. Also Read: Anurag Kashyap announces next movie “Girta Punjab”, based on Kings XI Punjab’s story

While the LDF has not reacted to the developments yet, Kerala sports minister EP Jayarajan declined to comment. “I have learned my lesson. I will not make any statement on this until I get confirmation that Sree ettan played for Kerala and brought laurels to the state,” the minister curtly stated.

BCCI sources revealed that they have also received an application from former South African cricket Andre Nel, who wanted to take his revenge on Sreesanth for the latter’s legendary six off his bowling. Others suggest that the BCCI could ask Indian spinning legend Rajdeep Sardesai Harbhajan Singh to apply for the job, to teach Sree a lesson yet again. Also Read: Superstar Rajinikanth to play Sir Ravindra Jadeja in cricketer’s biopic

Sreesanth’s application, meanwhile, has spawned yet another round of diverse applications from all parts of India and the world. So far, the BCCI has confirmed the receipt of applications from former Kingfisher chief Vijay Mallya, IPL co-founder Lalit Modi, former BCCI president N Srinivasan, JNUSU president Kanhaiya Kumar and senior advocate Ram Jethmalani. Rumour mills are abuzz that even Greg Chappell might soon be in the running.

Congress leader and former MP Rajeev Shukla, who is also the BCCI Vice President and IPL commissioner and a former journalist, mentioned that the idea of coaching India was tempting for him too, but he gave it a pass. “Given the number of things eSree is dabbling with, I esee a bit of myself in him,” the stout personality chuckled.

Things, however, took a new turn with the Team India coach fever spreading to the west too. “Just so you know, I am sick and tired of this race and I think it is time to quit. The idea of coaching team India is beginning to tempt me more and I might just do it,” said US Republican presidential nominee Donald Trump to journalist Rajat Sharma Sean Hannity.

“You saw what happened with Mohammad Azharuddin, so I will ban Muslims from joining the team until we can figure out what the hell is going on. I have great relationships with the Indian cricketers and trust me, as far as batting is concerned, we are gonna have The Wall. I am the only one who can get The Wall to help our batsmen, no one else can do it, coz that is what I do – I make deals, I make good deals for our team. Right now, it is like we don’t have a team anymore! I am gonna get The Wall and I’ll get Dravid to pay the batsmen himself. I’m gonna make Team India great again,” thundered Trump. 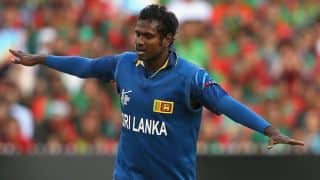 New Zealand Women are not far behind Australia and England: Sophie Devine