Team India would do well to gamble playing Varun Aaron

Team India would do well to gamble playing Varun Aaron

The addition of Aaron would bring in a new dimension to the pace attack. 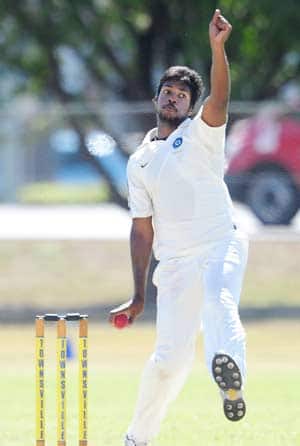 If India plays Varun Aaron, it would be a gamble worth taking. The addition of Aaron would bring in a new dimension to India’s medium-pace attack © Getty Images

When India set England a target of 188 off 23 overs in the second One-Day International (ODI), one would have felt that they had more than enough on the board and England would have to bat very well to get there. The absence of England’s power players in Kevin Pietersen and Eoin Morgan would have given the Indians a heightened sense of hope as the two batsmen are game changers. However, the Indian hopes were shattered by lacklustre bowling performance and England never looked under pressure right through the run-chase.

In the aftermath of the loss at Southampton, India’s biggest worry should be their fast bowling department. Praveen Kumar has had a very good summer but struggled in the second ODI and Munaf Patel was hit around despite bowling in the right channels. These two are India’s main bowlers and a lot depended on them in the absence of Zaheer Khan. However, both of them had a bad day at Southampton as the England batsmen had no problems in dealing with their military medium-pace.

To add to India’s problems, Vinay Kumar also struggled which meant that it was a collective failure of the pace department. Since Munaf and Praveen are indispensable to India’s scheme of things for the ODI series, Vinay would have to make way for Varun Aaron or Rudra Pratap Singh.

Vinay seems a stop-gap arrangement. He may be a wicket–taker, but tends to be very expensive when the batsmen are in the mood of swinging their bats around. The movement he gets off the seam is his biggest strength, but his lack of pace has hurt him in his brief international career.

The Southampton ODI wasn’t the first time batsmen carted him around the park. When India played Australia in an ODI at Visakhapatnam last year, Cameron White was severe on him in the slog overs and had no difficulty in sending the ball to the stands. In the final ODI of the West Indies tour earlier this year, he bowled a brilliant opening spell of five overs for just six runs and a wicket. However, he conceded 40 runs in his next four overs which was crucial in context of the game. Thus, it is clear that he is too expensive and India need to replace him before it is too late.

The third ODI at The Oval is very crucial in context of the series. India needs a victory to have any chance of winning the series. For this they need to blood in either Aaron or RP Singh. The choice between the two is not going to be easy as this is Aaron’s first tour and RP Singh looked rusty during the fourth Test at The Oval.

If India plays Aaron, it would be a gamble worth taking. Praveen and Munaf aren’t exactly fast bowlers, so the addition of Aaron would bring in a new dimension to the pace attack. Praveen’s swing, Munaf nagging length and Aaron’s thunderbolts would make for a good mix. With Aaron, the attack seems to have more teeth as pace was one big factor that was missing from action at The Rose Bowl.

However, Aaron is young and it isn’t clear if he is ready for international cricket. He didn’t play too many games during the Indian Premier League (IPL) for his side Delhi Daredevils which deprived quite a few people of a chance of catching a glimpse of him. His performance in the Emerging players tournament was encouraging and that would hold him in good stead on this tour. But the graduation to the highest level may have come quicker than expected and it would test Aaron’s temperament.

On the other hand, RP Singh was drafted into the squad out of obscurity as a replacement for the injured Zaheer Khan. In the fourth Test at The Oval, he looked unfit and out of shape as he hadn’t been in action for months. However, in the first tour game against Sussex, he seemed to have regained some form as he picked up four scalps. RP Singh is a talented bowler and the Indian team management have to make sure that he gets back on track as it would be very sad to see a bowler of such calibre being wasted.

Indian captain Mahendra Singh Dhoni may go with his instincts which have served him well since he took over as captain. Hopefully, his decision will help change his fortunes and that of the beleaguered Indian team.

It's time BCCI and players stopped functioning as disconnected units