O’Brien downed England and their 328 with an epic century 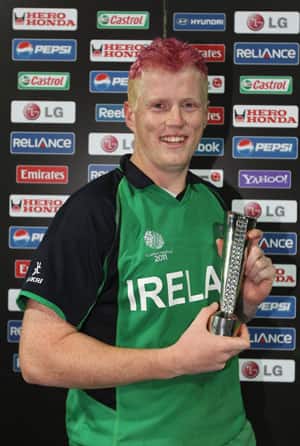 Ireland had lost half their side when O’Brien strode to the middle, his nose red and flashes of died pink hair visible from under a helmet that sat loosely on his head © Getty Images

For one glorious evening of cricket on Wednesday, Kevin O’Brien demonstrated every single reason why he’d been singled out as something special back as a precocious kid growing up in Dublin. When Ireland slipped to 111 for five, chasing England’s 328, there was every possibility that they would get swept off the carpet of the Chinnaswamy Stadium, and scribes and pundits likely already had their topic of debate lined up.

“Another abject batting performance by an Associate member. Just another team here to make up the numbers,” the critics surely would have reminded us.

They’ve been shut up, temporarily, after O’Brien downed England and their 328 with an epic century, the fastest in World Cup history and the sixth-fastest ever. Make no mistakes; this was the innings of the tournament. On the very ground – a lovely batting deck, mind you – where Sachin Tendulkar and Andrew Strauss creamed outstanding centuries four days ago, O’Brien thumped a century off 50 balls to carry Ireland to their most famous victory yet.

Many will scratch their heads and say, “Kevin who?” For the uninitiated (and there will be few of you after Ireland’s game against England), O’Brien’s abilities as a cricketer have been observed from his early days growing up in Dublin. From a young age it was evident, say those in the know, that the lad could hit a cricket ball. As he grew, physically and mentally, O’Brien progressed up the ranks of Ireland’s cricket structure, and by the time he made it to the senior side in 2006, hitting 35 from 48 balls against England, he’d earned a quite a reputation.

The 2004 Under-19 World Cup was a stepping stone for O’Brien, as he scored 241 runs and braced himself for sterner tests.

O’Brien’s first foray into print space came back on April 9, 2007 when his punchy 49 was the top score in a disappointing loss for Ireland in the World Cup. Scribes covering the match noted his ability to hit the ball, but little else was written of that effort. Six days later, after Ireland beat Bangladesh, O’Brien’s hitting drew gasps of awe, such was the ferocity with which he swatted the opposition spinners.

Half-centuries were littered through O’Brien’s ODI career thereafter: 83 off 52 balls to set up a big win over Kenya in Nairobi; an unbeaten 89 in an easy chase against Canada in Benoni; a stabilizing 54 in defeat to West Indies at Kingston; 98 not out against Netherlands in the final of ICC WCL Division 1 tournament, during which his contributions had already earned him two Man-of-the-Match awards; 73 not out in defeat to Zimbabwe in Harare – all aggressive innings, but none to match his maiden century in Bangalore.

Ireland had lost half their side when O’Brien strode to the middle, his nose red and flashes of died pink hair visible from under a helmet that sat loosely on his head. When he began with a booming drive off Graeme Swann that flew past where slip could have been, Andrew Strauss from midwicket clapped at his bowler encouragingly. When Michael Yardy was cracked for two fours in one over, the bowler didn’t so much as flinch as he went back to his mark. When O’Brien set himself up and swatted Swann for two sixes in his penultimate over, the sizeable contingent of Irish fans present raised their glasses and stomped their feet. It appeared a bit of hit-and-giggle, the sort of all-is-lost-so-let’s-have-some-fun type of hitting that earns smaller players some praise after another sapping defeat.

But then O’Brien absolutely unloaded on a short ball from James Anderson, launched it over square leg for six to raise a 30-ball fifty – the fastest for Ireland. Anderson had some words with O’Brien, oddly, and was left to chew on an earful as he walked back. O’Brien wasn’t going down without a fight. “If we would have gotten out soon, it would have been a boring game for the supporters and so I decided to chance my arm, it paid off,” was his take after the match.

And on he went, smashing everything and everyone. Tim Bresnan, hero for England with the ball against India, wasn’t even allowed a sighter. Nope, first ball from Bresnan, O’Brien backed away and swished, edging four to third man. Ball after that, O’Brien again made room and carved the most stunning six over cover. The rest of his innings will be remembered as a blur, a commotion of incredible boldness.

The batting Powerplay was taken, and Anderson persisted with. First ball faced, O’Brien inside-edged four to fine leg. OK, you thought, now he’s going to back away once too many and lose his leg stump. Instead the next ball was creamed on the rise past cover for four. The sixties came and went in two deliveries, the over was completed with the biggest six of the tournament, and England were sweating.

What did they do? Strauss changed fields and bowlers; O’Brien kept on hitting them. From 80 to 90 he went in two balls, Strauss dropped a tough chance on 91, and the hundred arrived – his second overall, and first since February 2007 – not with a bludgeon to midwicket but with a turn of the wrists and some fierce leg-pumping. Just the third time he’d come back for a second all evening.

O’Brien was out soon after, with Ireland 11 runs away from victory. He’d faced 63 balls for 113; Ed Joyce, an Irishmen who’d gone to England and back, made 32 off two deliveries less. It was an audacious innings, and the party must still be going on in the team hotel.

And so, Irish fans, take March 17, 2007. Wrap it in cotton. Place it in a safe box of happy memories and bask in the greatest day for Ireland cricket. Those of you present tonight in Bangalore, make sure to tell this story to all you see when you return home. Cherish this day, for it is unforgettable.

And if you happen to run into Kevin O’Brien back in Dublin, do make it a point to shake his hand. Thanks to him, St Patrick’s Day came early this year.

What the ICC can do now for deserving Ireland