The Ashes 2013: When Stuart Broad ran through Australia in a session at Chester-le-Street

The Ashes 2013: When Stuart Broad ran through Australia in a session at Chester-le-Street

On this day last year, Stuart Broad produced one of his finest spells to raze Australia.

On August 12, 2013, Stuart Broad ran through the Australian line-up in less than a session to grant England a tremendous win after they were trailing in the first innings. Shiamak Unwalla remembers the day that helped England win their third Ashes in a row.

Stuart Broad has a rare quality. He can look completely ordinary during one spell, and wreak havoc in another. Broad has, for a long time now, shown a tendency to ravage the opposition. That he has six six-wicket hauls and two seven-wicket hauls in 73 Tests shows that much.

During the England leg of the Ashes 2013, Broad followed a similar pattern. In the fourth Test of the series at Chester-le Street, Broad guided England to one of their most memorable victories of the year when he trounced the Australian line-up with his pace and movement. Here is a look at what happened on the days leading up to that session.

Day One: England batted first after winning the toss, but were soon left ruing their decision. Alastair Cook scored 51 and Jonathan Trott made 49, but no other English batsman could cross 26. England ended the day at 238 for nine. Nathan Lyon’s four wickets had put England seriously on the back foot, as Australia looked set to skittle out the hosts for a sub-250 total.

Day Two: Jackson Bird knocked over James Anderson early, as England’s innings folded up for 238. In reply, Australia were reduced to 76 for four thanks to Stuart Broad’s triple strike. However, a partnership between Chris Rogers and Shane Watson saw Australia reach 205 before the next wicket fell. Australia ended the day in command at 222 for five.

Day Three: Rogers went on to complete his century, but wickets kept tumbling at regular intervals. Eventually, Rogers departed for a gritty 110 and Australia were bowled out for 270. Stuart Broad finished with a fifer as Australia could only manage a 38-run lead.

In reply, England were tottering at 49 for three before Kevin Pietersen and Ian Bell came to their rescue. However, Pietersen and Jonny Bairstow were both dismissed by the end of the day. Bell’s century meant that England were in command despite losing a couple of late wickets. Ryan Harris was the star with the ball for Australia as he ended the day with four of the five wickets captured by Australia. England finished the day at 234 for five.

Chasing 299 for a win in over five sessions, Australia started off in spectacular fashion with David Warner and Rogers striking their way to a century opening stand. Broad was largely ineffective in his first spell, as Australia got to 109 before losing their opening wicket.

Rogers was the first man to go, caught by Trott off Swann for 49. Despite that wicket, Australia went to Tea at a very comfortable 120 for one, just 179 runs adrift of what would be an excellent victory.

The spell that sank the ship: Australia resumed well after Tea with both Warner and Usman Khawaja scoring freely. Khawaja was out LBW to Swann, however, and soon Warner edged one to Matt Prior off Bresnan. It was then that Stuart Broad was introduced into the attack. At the end of the 47th over, drinks were taken.

The very first delivery after the break saw Broad unleash a delivery that might have been unplayable even for The Don. The ball was quick, it swung into Michael Clarke, and then seamed away just enough to beat the bat and knock out the off stump. It was a ball that Broad would remember fondly to this day. Australia were now four down for 174, still comfortably placed.

However, in Broad’s next over, Steve Smith pulled one that was not quite short enough to pull. The resultant inside edge upset the timber, as England roared in collective ecstasy. Australia five for 175, but they might still have been optimistic about their chances.

However, Tim Bresnan captured Shane Watson LBW soon after, and Australia began to unravel swiftly after that. Brad Haddin was pushed on the back foot by Broad, and was also adjudged leg-before after missing a straighter one. By this time the warning bells had begun to toll in the Australian camp, as the visitors were seven down for just 181.

Harris was trapped in his crease and rapped in front of the pads by Broad, who by now was absolutely unstoppable. Eight for 199 was followed by nine for 211 as Broad sent Lyon’s off stump cartwheeling with another cracker of a delivery. Soon, Broad and England were celebrating their third consecutive Ashes triumph, as Peter Siddle lobbed an easy catch to James Anderson to award England an amazing 74-run win.

Australia had the match in the bag at Tea on the fourth day thanks to Warner’s knock, but Broad turned up with an absolute gem of a performance to skittle out the Australians in what proved to be a masterful spell of seam bowing. His match figures of 11 for 121 remain his best in Test matches, and though he has since bowled similar spells — most recently snaring six for 25 against India at Old Trafford —the hostility and movement he generated in that one nightmarish session at Chester-le Street could well be the crowning moment of his already impressive career. 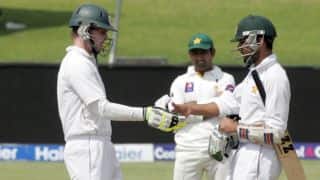 Zimbabwe must play more Tests to improve their cricket 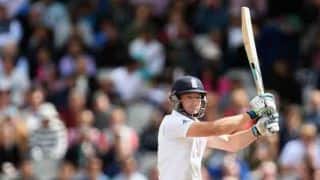