The events that took place that day have been recounted several times over.

The doors at The Oval through which Don Bradman walked out to play his last innings in Test cricket have been renovated and refurbished with commemorative plaques. They are now known as The Bradman Doors. Arunabha Sengupta looks at this unique memorial at The Oval and the history associated with it.

Later in the day, as he walked out to bat for the final time in Test cricket, all he needed were four runs to complete 7,000 Test runs and end with a career batting average of 100.

Sadly, he finished four short, bowled by a googly by Eric Hollies. As Jack Fingleton later observed: “The game that had given him so much had denied him at the very last Test appearance.”

The events that took place that day have been recounted several times over.

Ray Lindwall had vanquished England for a mere 52 in the first innings. For Australia, Arthur Morris and Sid Barnes had already added more than double what the hosts had managed.  Eric Hollies struck at 117. Barnes was caught by Godfrey Evans behind the wicket.

The great moment had arrived. The Don walked out for what would be his farewell innings, accompanied by a sterling ovation from the 20,000- strong crowd.

In the middle, Norman Yardley arranged his men to give the great man three cheers. Less known is Yardley’s full statement to his team as Bradman strode out to bat, “We’ll give him three cheers when he gets on the square, but that’s all we’ll give him. Then bowl him out.”

In the commentary box, Rex Alston handed it over to a young John Arlott with the words, “The crowd settles down again — they’ve got 40 minutes left to play and Bradman is now taking guard. Hollies is going to bowl and John Arlott shall describe the first ball, so come in, John.”

Arlott took it up from there in a piece of splendid imagery laced with emotion, “Well, I don’t think I’m as deadly as you are, Rex, I don’t expect to get a wicket. But it’s rather good to be here when Don Bradman comes in to bat in his last Test. And now, here’s Hollies to bowl to him from the Vauxhall End.

“He bowls, Bradman goes back across his wicket, pushes the ball gently in the direction of the Houses of Parliament, which are out beyond mid-off. It doesn’t go that far as that, merely goes to Watkins in the silly mid-off. No run, still 117 for one.  Two slips, a silly mid-off, and a forward short leg close to him as Hollies pitches the ball up slowly and …he’s bowled…Bradman bowled Hollies … nought …and what do you say under these circumstances? I wonder if you see the ball very clearly in your last Test in England, on a ground where you’ve played some of the biggest cricket in your life and where the opposing side has just stood round you and given you three cheers and the crowd has clapped you all the way to the wicket. I wonder if you see the ball at all.”

The man who had scored tons of runs at The Oval, in all the other English grounds, everywhere he had played his cricket, did not get the four runs required to go past 7,000 Test runs and spike his average beyond 100.

The legend walked back with the crowd rising in deafening applause yet again. The applause for the batsman must have left Hollies bemused. It was the best ball he had bowled all season.

The actual doors through which Bradman walked out to play that final innings at the ground had fallen into slight disrepair.

However, the Surrey County Cricket Club have carried out the renovation work diligently they have been restored to their full former glory. The two doors lead from the corridor behind Galadari Museum to the Pavilion Terrace.

They have now been set up with plaques commemorating the momentous occasion.

As curator of the museum Bill Gordon said, “It is here that Bradman played his last innings. No other ground in the world can claim that.” 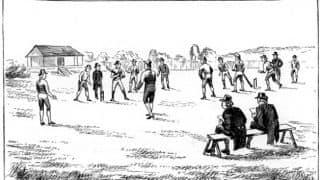