The consistency of KKR’s chase

The consistency of KKR’s chase

Humjee Break-Sheikh looks at the chasing mantra that worked for Kolkata Knight Riders.

The key to the successful chase by Kolkata Knight Riders (KKR) in the final of the Indian Premier League (IPL) 2014 lay in their consistency. Humjee Break-Sheikh looks at the chasing mantra that worked.

When Wriddhiman Saha’s spectacular hundred had left Kolkata Knight Riders (KKR) with a target of 200 in the final of Indian Premier League (IPL) 2014, they were definitely not the favourites for many. Few would have imagined KKR to have pulled off a chase this stiff.

How did KKR do this? Their mantra was to ensure that the required run rate never went above the 12-mark. Indeed, the over after which the required rate for KKR was the highest was the 12-over mark, when they needed 90 from eight overs — an achievable target under in IPL.

Let us have a look.

As is evident, KKR’s run rate never went significantly below the asking rate of 10 — which ensured that the asking rate did not climb too high. As long as they maintained that run rate (they required 39 off the last four) they needed a single big over to seal the match. Though Karanveer Singh removed Ryan ten Doeschate and Manish Pandey in the 17th over, KKR also smashed 18 runs, which meant that the asking rate took a nosedive.

Compare this to the Kings XI Punjab (KXIP) performance, which was cautious to begin with, and explosive towards the end. In fact, their first 11 overs had fetched a mere 67 (in complete contrast to the last nine, which accounted for a whopping 132). KKR, on the other hand, had reached 87 after nine overs, and despite the Saha’s onslaught, were never behind KXIP at any stage during their chase.

The following graph will demonstrate this. 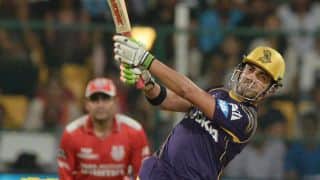 IPL 7 Final: Not many people thought we would be here, says jubilant Gautam Gambhir after KKR’s win