At Billy Wood’s Croft in Batley, a man called Sam Smithson did something unusual to get rid of the great man.

June 27, 1876. The Year of Grace was underway as WG kept smashing one record after another, setting milestones hitherto not even imagined by mankind. He scored the first two triple-hundreds in history, a quadruple hundred, and took wickets by the bagful. As was expected, captains and bowlers across the country tried up with every conceivable plot to get him out, albeit in vain. At Billy Wood’s Croft in Batley, however, a man called Sam Smithson did something unusual to get rid of the great man. Abhishek Mukherjee looks back at an incident when The Doctor was, for once, on the receiving end of an astute move.

The quadruple-hundred against Grimsby was still a fortnight away, but The Doctor had already embarked upon the journey that would mark 1876 as his own year. He would peak in August, scoring 839 runs in 8 days (he also took 15 wickets and 6 catches) that involved travel of approximately 370 kilometres in the pre-aeroplane days. ALSO READ: WG Grace scores 399 and gets the scorer to add a run

He would not stop there. His 26 First-Class matches would fetch him 2,622 runs at 62, 130 wickets at 19, and 46 catches. If we consider all matches, the tally goes up to 3,669 runs from 38 matches at 59, 211 wickets at 17, and 77 catches. One must remember that most of these Second-Class matches were played against ‘odds-teams’, where the opposition had more than 11 members in the side: not only did the entire lot bat, they also fielded.

Before the massacre started, Grace’s United South of England XI were invited to play at Batley, a small town in West Yorkshire. Reg Nelson mentions cricket being played at Batley in the 1840s, but there is no record of a representative side taking field before 1862. In that match, an All-England XI led by George Parr (and featuring Tom Richardson’s uncle of the same name) beat a local XXII by 62 runs.

Though toss result remains shrouded in mystery, we know that Batley batted first (if you mind the pun) in front of a crowd estimated somewhere between 4,000 and 5,000. Taking first strike was Dick Barlow, a pillar of Lancashire cricket for two decades who would play 17 Tests, and would be immortalised by Francis Thompson in At Lord’s.

Five of the top six men reached double-figures (Barlow got 10) but none made it to 25; and Lumb, batting at No. 10, was left stranded the tourists captured all 19 wickets for a mere 152. John Lillywhite led the rout with 8 wickets, Fred Grace had 5, and Jack Southerton, 4.

WG also bowled in the innings at least once, to Louis Hall — easily the greatest cricketer to emerge from Batley. Hall would later play 315 First-Class matches, and would remain a Yorkshire mainstay for over two decades.

WG recalled the contest in Cricket: “I was bowling to him [Hall], and had tried to tempt him to hit out for some overs, but failed. Suddenly he woke up, and, to my surprise, hit me to square-leg clean out of the ground: and he kept it up for some time.” Hall scored 20.

Note: Grace’s memory had betrayed him a bit while describing this duel. He mentioned that Batley had fielded an XVIII, while it was actually a XX.

All seemed well for the tourists. In his previous match, for MCC against Oxford, Grace had scored 67 (along with 6 wickets and 3 catches). Earlier that month he had slammed 104 against Sussex. All was well.

Grace walked out with George Elliott (not Eliot — would that not have been wonderful?). The latter probably had too much adventure within him, and was immediately caught by Hall off Joseph Blackburn.

Blackburn, a find of the season, was genuinely quick. The previous season he had wrecked Yorkshire United with 7 for 14 and 4 for 20, and claimed 7 more wickets against Yorkshire for their Colts. Playing against Colts of England a month before the match in question, he had match figures of 10 for 60.

Did the illustrious tourists take Blackburn lightly? One will never know. What we do know is Blackburn tore through them with 9 wickets (alas, we do not know how many runs he conceded). He could have got all 10, but No. 11 batsman Richard Fillery chose to be bowled by Amos Hind.

The champions — including WG and Fred Grace, Harry Jupp, Walter Gilbert, Ted Pooley, Henry Charlwood, and Richard Humphrey, all champions of the era — were skittled out for 60. The lead was 92 (in other words, more than 80, the requisite for the era); follow-on was enforced.

Grace was in no mood to get out cheaply twice in the match. As always, he scored runs at breakneck pace, with Jupp for company.

The inadequate bowling scorecard listed only the wicket-takers; there is no mention of Blackburn in the second innings; neither is there a count of how many overs Sam Smithson (or anyone, for that matter) bowled.

Similarly, we do not know who led Batley that day. It could have been Barlow, or the local hero Hall; or someone else. We do not know.

On came Smithson. He chucked blatantly, not giving the great man any chance to adjust. He was clean bowled. Since the umpire only called after the ball was dead, Grace had to leave.

An angry Grace recalled: “I was fairly well set, when a bowler whom I had never seen before was commissioned to have a try at me. The very first ball was a deliberate throw, and it hit my wicket, and I had to go out, every one of the opposite side alleging that as the umpire had not ‘no-balled’ him, the ball must be considered to have been fairly delivered.”

Of course Smithson had thrown. He had pulled off an illegal act. But it was already done. Despite all his grumbling, the last thing Grace could complain of was gamesmanship — something he has been guilty of throughout his career.

Grace had scored 40. There was resistance from his cousin Gilbert (32), while Jupp, Pooley, and Lillywhite all reached double-figures. United South of England XI were bowled out for 167, the highest total of the match. Unfortunately, that left Batley to score a mere 76 for, if I may remind, 19 wickets.

Barlow and Hall both failed, but a rate of 4 per wicket was never going to be challenging. A Knowles (22) ensured that, as did Blackburn (11). In the end Batley won by 11 wickets.

– Grace let his steam out in the three Gentlemen vs Players matches that followed. He got a 90 and a 169, but more significantly, picked up 27 wickets from the 3 matches. The next match saw him score the only 400 of his career.

– Two years after the match the touring Australians played Batley (Fred Spofforth was “spared the mudbath”). The Australians were bowled out for 160, and time ran out with Batley XVIII on 59 for 10. Batley still play cricket, as do their second XI. 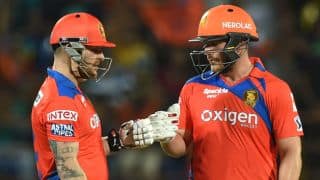