Apart from being an excellent cricketer, Tom Emmett was one hell of an entertainer.

On August 16, 1878, Tom Emmett was bowled by Frank Townsend s innocuous lobs. Once back in the dressing-room, he took it out on a teammate, as Abhishek Mukherjee describes.

For the uninitiated, Tom Emmett was a great Yorkshire left-arm fast bowler, whose 1,572 wickets came at 13.55. His most dangerous ball pitched on leg and jagged slightly away to hit off. Emmett called it the sostenuter , though nobody knows why. When asked, the response was what else would you call it?

He was a man like that. As Wisden pointed out, there was never a more popular professional, his cheery nature, and the inexhaustible energy with which he played the game, making him a prime favourite wherever he went.

It is not hyperbole to describe Tom Emmett as the greatest character in nineteenth-century cricket, concurred Alfred Old Ebor Pullin. There have been greater cricketers than he, but none so genuinely droll and individualistic For twenty years Tom Emmett was the Charivari of the cricket field.

In Lord Hawke s biography, James Coldham called Emmett was an erratic, infuriating and ultimately brilliant cricketer , adding that after W. G. Grace he was the best known and the best loved cricketer of his day.

Hawke once pointed out that Emmett had bowled forty-four wides in a year. Just give me the ball and I ll soon bring them up to 50, came the response. As captain he often had a packed off-side field, bowled on the leg-stump, and laughingly explained others I expect it was bad bowling.

On one occasion, George Freeman, Emmett s predecessor as premier Yorkshire fast bowler, was resting with his foot in ice. When a wicket fell, Emmett ran in and asked How s t foot? Then he popped a piece of ice for luck and ran back.

Gloucestershire were bowled out for 118 by an England side at The Oval. As was often the norm those days, Billy Bates (5 for 63) and Emmett (4 for 42) bowled unchanged through the innings. England were reduced to 88 for 5 before WW Read and John Selby took them past the Gloucestershire total. Emmett walked out for 126 for 6 after Frank Townsend bowled Selby with his underarm lobs.

Now Emmett fancied himself against that genre of bowling. A lob-smiter, he called himself. He duly collected two runs. What followed was somewhat like this: He bowled a ball, a good-length one, which got me quite in a knot. First I would jump out to it; then I would play forward; no, I would play back. All that passed through my mind like a flash. Finally, I didn t play it at all, but held my bat up for it to go by. Whether or no it pitched on something I have never been able to satisfy myself to this day, but to my astonishment it bowled me out!

It was a brain-fade alright, but Emmett being Emmett, he calmly picked up the bails, placed them on the stumps, and asked Townsend: just let me have that one over again, will you, please? Then he left as the Gloucestershire fielders were left in splits.

As he walked towards the pavilion, a voice from the crowd yelled:

Emmett, how was it?

Well, Mr Emmett, how was it?

Then what shall I call you?

Call me a $&*#*^@ fool, he replied as he disappeared to the safety of the pavilion.

Emmett was obviously unhappy, and the poor Gloucestershire batsmen bore the brunt. After England stretched their lead to 45, Emmett bowled unchanged yet again, taking 8 for 51, skittling out the tourists for 118 exactly what they had scored in the first innings. England won comfortably, by 6 wickets. 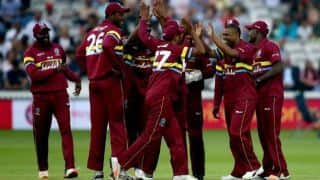