The first Alphabet Match: A to C versus Rest of the Alphabet

The first Alphabet Match: A to C versus Rest of the Alphabet

The Alphabetical XIs published in these pages have been followed with a lot of interest and passion.

August 2, 1786. The first actual match between Alphabetical XIs. Many readers have followed the Alphabetical XIs in these pages with a lot of interest. However, Arunabha Sengupta delves into the historical pages to discover the Alphabetical sides who contested the first ever match that was organised with similar conditions.

The Alphabetical XIs published in these pages have been followed with a lot of interest and passion. And it has been a lot of fun producing one alphabetical team after another.

To explain the concept, we formed All Time XIs with cricketers whose last names began with a particular letter of the alphabet A, B, C and so on with a caveat, one we had to explain some thousand times, for very common last names such as Khan, Mohammad and Singh, the concerned cricketer would be categorised by the first name. Thus, Imran Khan would be under I, Hanif Mohammad under H, Yuvraj Singh under Y and so on. That was because otherwise Khans would be very likely to have an XI of their own, as would the Mohammads and the Singhs.

While these XIs were drawn up with cricketers across eras, and existed in the cricket grounds of imagination, when we go back in time and look at historical archives we find that there have actually been quite a few actual Alphabetical XIs.

The first such match, with teams selected according to letters of the alphabet, was played at Molesey Hurst, from August 2 to 5 in 1786.

The players with last names starting with A, B and C squared up against the Rest of the Alphabets.

The A to C side was in fact an all-Kent XI with only the players with surnames starting with A, B and C being selected to play from that county team. On the other hand, D to Z was composed entirely of players from Hampshire, with the exception of the great Surrey bowler Lumpy Stevens who was drafted into the team.

In Scores and Biographies, the assiduous chronicler Arthur Haygarth actually called the match Hambledon Club with Lumpy versus Kent.

The teams were as follows:

Of course, with Lumpy, Harris, Small, Tom Walker and the others, the Rest seem a better side, at least on paper. Winchilsea himself, though, was far from the best of cricketers, although he was certainly the most-documented person in the game in the 18th century.

However, A to C were ahead during the early exchanges. After dismissing Rest for 116, of which Tom Walker got 56, they took a 27-run lead through some excellent contributions from low down the order. Only two bowled dismissals are attributed to Lumpy, because the dismissals through caught were jotted down against the fielders in those days.

In the second innings, there were plenty of useful contributions from the batsmen and the Rest finished at 144. This set a target of 118. But, when A to C batted again, only Booker with 33 managed any resistance and the innings fell away for 92.

Lumpy is recorded as bowling two batsmen and catching another, but we cannot really know how many wickets he took in modern terms. One assumes that, although 51 when he played the match, he did run through the innings as he was known to do.

Thus, the Rest won by 25 runs in the first contest between Alphabetical XIs. 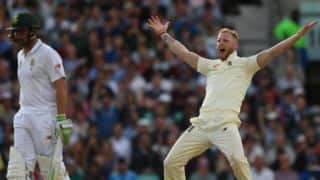