“What a bloody stroke,” said Johnny Wardle. It was only inevitable that Fred Trueman would lash back.

July 7, 1954. Fred Trueman and Frank Tyson met in a duel at Northampton. Tyson won the first battle, running through the Yorkshire lower-order. Among the wickets was Trueman, who returned to the pavilion and unleashed a comeback line on poor Johnny Wardle. Abhishek Mukherjee looks back at one of the greatest intra-team sledge exchanges in history.

The early 1950s saw an assortment of new-ball bowlers emerge in England that remains unmatched in their history, at least in the post-War era. The roll call made amazing reading: Fred Trueman, Brian Statham, Frank Tyson, and Peter Loader, all of whom were out-and-out quick; Fred Ridgway and Trevor Bailey were quite brisk; and Alec Bedser was still around.

Tyson, of course, was the quickest of them all at his peak, with Trueman hot on his heels. Godfrey Evans, who had kept wickets to both, had no doubt about the verdict.

However, their paces were compared by fans and cricketers alike. Reliable speed guns were decades away. There were speculations regarding who was the fastest. As a result every Northamptonshire-Yorkshire contest became a battle inside a battle for Tyson and Trueman.

Yorkshire won the first of the two matches, at Bradford, Trueman taking 5 for 63 and 1 for 15 and getting a second-innings 33. Tyson’s figures, 0 for 54 and 3 for 36, were less impressive, but he did contribute with 70 (bowled Trueman) and 21. Trueman had definitely drawn first blood, but then, Yorkshire were a significantly superior side, and it was a home match for them.

Tyson was in no mood to accept this. In the return match at Northampton a week later, he went flat out in pursuit of wickets. Billy Sutcliffe, bearing the massive burden of the name William Herbert Hobbs Sutcliffe, scored 105, but Yorkshire kept losing wickets.

Johnny Wardle was arguably the greatest post-War spinner. He had bowling averages of 20.39 in Tests and 18.97 in First-Class cricket. He was also a decent batsman.

On this day, however, he was no match for Tyson. If one goes by Jim Sims, Wardle was “not frightened, but somewhat apprehensive” to face Tyson. It was justified: first came the infamous Tyson bouncer that set Wardle up. This was followed by the yorker that flattened the stumps.

Trueman, the next batsman, crossed Wardle on his way out. “What a bloody stroke,” he commented at the very moment.

Soon afterwards, Tyson clean bowled Trueman as well. Wardle was obviously waiting at the pavilion to give it back. As expected, he greeted Trueman with “what a bloody stroke” as soon as the latter arrived.

It is not known whether Trueman had planned his comeback line on his way back. The oft-quoted line, however, has made its way to many a dressing-room recollection: “Ay, I slipped on the pile of sh*t you dropped at the crease.”

The story should have ended here, but Fred, John Arlott’s biography of Trueman, probably deserves a mention here.

However, the scoreboard reads differently. Trueman joined wicketkeeper Roy Booth when Wardle fell. The score read 246 for 8. The ninth wicket fell at 250 — and more importantly, Trueman had scored 1.

Arlott had got the score wrong. And given that the partnership had yielded 4, Trueman could not have returned “within a minute”. Of course, it could have been a figure of speech: who would not want to give Arlott benefit of doubt? 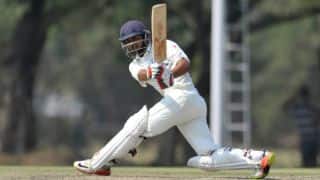 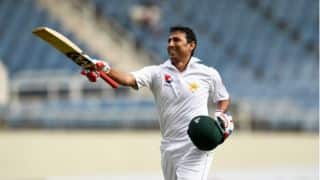