Warner added a new dimension to his personality by writing a children's book series.

David Warner wanted to break away from the stereotypes and write fiction, that too for children, and did a wonderful job of it. Abhishek Mukherjee reviews the first two editions of Kaboom Kid — Warner’s contribution to the world of literature.

What does David Warner do when he does not beat the unmentionables out of bowlers across the world? He writes fiction for children. It is hard to believe that the man, whose sledgehammer of a willow tore many a bowler in shreds and sent fielders ducking for cover, actually wields a pen (er, it must be the keyboard these days, but a pen just sounds cooler); for children.

There was a time when cricketers actually wrote books. They still do, but the count has gone down substantially, and you cannot blame them. Not only has cricket become more hectic, but with other sources of income available, cricketers need not fall back on writing as an alternate source of income. Writing fiction for children is almost unthinkable.

Unless you are David Warner, that is.

Welcome to the world of 11-year old Davey Warner, Kaboom (yes, Warner’s bat), and his worn-out poster of Ricky Ponting (decorated with a beard and two coloured teeth — does anyone remember Ponting from early 1996 with a little goatee?). Davey is your ubiquitous cricket-obsessed Australian schoolboy, and his passion is shared by his elder brother Steve (are we allowed to call them Warner Brothers?), their parents, and Max — the dog who never drops a catch.

Add to that the other students of Class 6M (where “Smudge” Mudge is the class-teacher) — Sunil Deep, George Pepi, Kevin McNab, Bella Ferosi, and the class bully Mo Clouter (yes, the class bully was called Mo), and you are teleported to Warner’s world; or rather, a world where days when life was all about fun and frolic and cricket and never about workload and tension.

In short, though David Warner has a written a book about an 11-year old for 11-year olds, us thirty-somethings derived an equal amount of pleasure from them. He writes with the same joy as Davey bats with his Kaboom for Sandhill Sluggers; the descriptions are real, as are the emotions Warner (Davey, not David) goes throughout the course of events, making them realistic for any aspiring 11-year old schoolboy.

The back-cover reads “David Warner wasn’t always the Australian cricket legend he is today. He was once a kid, too, just like you.” The publishers were certainly trying to portray Davey as a young David: the concept may be far-fetched in terms of facts, but may actually be similar in spirit. In other words, David probably saw himself, his alter ego in Davey; the books could not be such joyful reads otherwise. How else would he write about a boy who plays cricket, plays more cricket, and if he gets some free time after everything, plays even more cricket?

There is something for the grow-ups as well. When Kaboom is taken away from Davey, he has an imaginary conversation with Ponting’s poster that “was so old and faded it had taken on a greenish tinge”, he learns how Don Bradman practised without a cricket bat, and immediately tries to emulate the legend.

As for the love for the sport, the following passage should suffice: “Cricket was his game, and it always would be. For one thing, in lawn bowls they didn’t use bats. What kind of a game was that? And how could he possibly play a game without Kaboom? It wasn’t worth thinking about.”

The books are uncomplicated, honest, innocent, and does not get into complications. The problems are simple, and solved with the intelligence levels of 11-year olds, and are hence perfectly believable. The chapters are short to ensure young readers do not tire out; neat illustrations by Jules Faber will bring a smile to your face; and kudos to JV McGee for keeping the language uncomplicated and addictive.

Most importantly, though there are a lot of people in this world in 2015 who are “passionate about cricket”, they seldom have a deep respect for the sport. One of the lessons the book gives you — silently — is that if you love cricket, you need to give it the respect it deserves If you want to gift a boy in his tweens a perfect story about a boy whose world is cricket, look no further. Only then will you earn it back.

The other lesson is about having dogs in practice sessions, but we will not go into that. 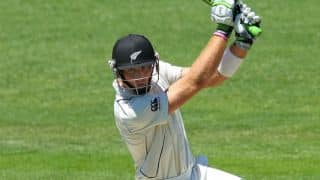