India’s lackadaisical attitude in chasing 180 runs in 47 overs reminded me of the 1978 Test match between Pakistan and India at National Stadium, Karachi. The fact that Mahendra Singh Dhoni agreed to end the Test at Dominica before the mandatory 15 overs began was baffling. India, at that point, required 86 runs off 90 balls and with seven wickets in hand. At the crease were Rahul Dravid and VVS Laxman, with Virat Kohli, Dhoni and Harbhajan Singh to follow.

A great team plays to win, while India’s attitude on Sunday was of a team which plays not to lose. The fear of failure was quite evident – an attitude not associated with true champions. India clearly lacked the killer instinct which champion West Indies and Australian sides of the past had.

Let me illustrate killer instinct by going back in time to a Test match at Karachi in 1978. Pakistan were very much in a similar situation that India found themselves in going out to bat in their second innings. Pakistan, like India, were leading 1-0 in a three-Test series. They needed 164 runs in 26 overs. Pakistan could have opted for safety instead of daring the very risky ask. A loss against India would have been unacceptable for the Pakistani fans, especially after having the series in the bag. But captain Mushtaq Mohammad promoted Asif Iqbal to open the Innings with Majid Khan. The intent was there in going for the kill.

Like India, Pakistan lost an early wicket – Majid Khan. But they did go about their task with a sense of purpose. Javed Miandad joined Asif in the middle. Both the players were flying between the wickets, converting ones into twos and twos in threes. The pair added 97 runs from only nine overs to take the team to brink of a famous victory against their arch-rivals.

They lost Asif for 44, but they still required 48 more runs to win. Mushtaq now promoted Imran Khan to No.4, ahead of himself, Mudassar Nazar and the injured Zaheer Abbas. The move paid rich dividends as Imran tore apart Indian captain Bishan Singh Bedi by hitting for two 6s and a four in one over. Pakistan romped home in 24.5 overs, scoring at a rate of 6.6 per over and achieved the target in less than 100 minutes. Miandad remained unconquered on 62 and Imran unbeaten on 31.

Just a few months back Dhoni promoted himself ahead of the in-form Yuvraj Singh to play a match-winning innings and help India win the World Cup. It was sad to see this otherwise positive captain not grabbing the opportunity he was presented with to crush a weak West Indian attack and register an emphatic 2-0 series victory. 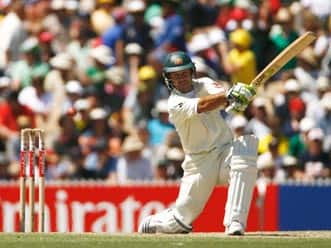