August 12, 1991. West Indies have not yet recovered from that day when Viv Richards, Malcolm Marshall and Jeff Dujon walked out of The Oval, having played the final Test match of their glittering careers. Arunabha Sengupta remembers the game that marked the beginning of the end of West Indian dominance over world cricket. 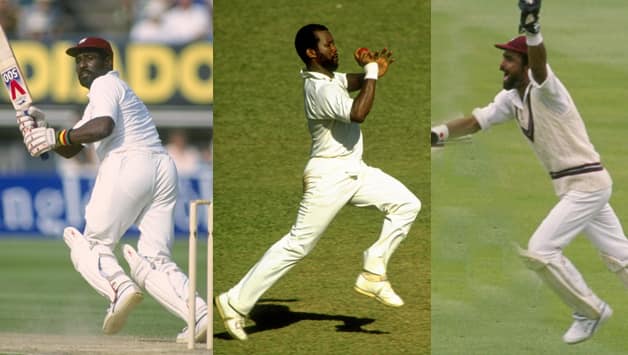 The three giants of West Indies cricket who left the field together for the last time…From left: Viv Richards, Malcolm Marshall and Jeff Dujon © Getty Images

August 12, 1991. West Indies have not yet recovered from that day when Viv Richards, Malcolm Marshall and Jeff Dujon walked out of The Oval, having played the final Test match of their glittering careers. Arunabha Sengupta remembers the game that marked the beginning of the end of West Indian dominance over world cricket.

With a little under two hours remaining in the match, Ian Botham walked out and struck the first delivery he faced to the Compton corner to finish the game in style. The ball rebounded from the exact spot where Denis Compton’s famous sweep off Arthur Morris had come to rest, winning England the Ashes in 1953 after a gap of 19 years. And now, Botham’s hit had managed to draw a series against the mighty West Indies for the first time since 1974.

Debutant Clayton Lambert, who had trapped Mark Ramprakash leg-before with his third delivery in Test cricket, would bowl only one more over in his entire Test career. After returning to the national side after two years, Botham signed off a memorable Test match with his remarkable flair for the epochal moment. Of course, his return had been made doubly memorable when he had tried to hook Curtly Ambrose in the first innings and had flicked the leg bail with his thigh — Jon Agnew had remarked that he ‘could not quite get his leg over’ sending Brian Johnston into the most famous fit of giggles ever heard in cricket.

Yet, the occasion was as historic as it had been in 1953 for many more reasons than the curious dismissal. Just as Compton’s hit had heralded an era of dominance of world cricket by England, the Botham strike on the final day dropped the curtains on the years of undisputed reign of the West Indies.

The Carribean cricketers had still not lost a series since that dubious 1979-80 tour of New Zealand. However, with this Test, three champions who had propped up the three departments of the game during their period of greatness bid a synchronised farewell. It was the beginning of the end of West Indies as the sole superpower of the cricket world. Things would no longer be the same after Viv Richards shelved his majestic willow, Malcolm Marshall tossed away the lethal sphere of red leather and Jeff Dujon took off his faithful gloves.

It was not a happy swansong. Seven years earlier, a similar combined farewell at Sydney had seen Greg Chappell, Dennis Lillee and Rodney Marsh hang up their enormous boots in an exodus of greatness for the realms of retirement. Australia had won the Test match against Pakistan by an innings. The country had been plunged thereafter into unplumbed depths, spending several years trying to cope with the loss of the heart and soul of batting, bowling and wicketkeeping. But at least the trio had signed off with a triumphant flourish.

The end for Richards, Marshall and Dujon could not have been more dismally discordant with their supreme careers. Two days earlier, Phil Tufnell had produced a spell of six for 25 which resulted in England inflicting the ignominy of follow-on on West Indies for the first time in 22 years and 48 matches.

Richards, captaining the islands for the 50th time, was battling a headache and held himself back in the batting order to number eight. And when he finally emerged, he lasted seven balls before snicking Tufnell to Alec Stewart behind the stumps for two. Dujon, a far cry from the distant days when he had been touted as one of the best batsmen of the West Indies line up, bagged a first ball duck. Marshall, whose 24 overs in the first innings as second change had brought him one for 62, picked up a blob as well. Desmond Haynes carried his bat, scoring an unbeaten 75.

In the second innings, Richards walked out to a standing ovation on the fourth day with the score reading 208 for four. At the other end Richie Richardson was waging a determined fight-back. The master wielded his blade for one last time, glimmers of his regal splendour on view once in a while. A few drives thundered on both sides of the wicket, the cuts were as fierce as ever and at least once the imperious pull came off — nonchalantly off the front foot. The innings defeat was averted and the visitors looked comfortably placed in the last session, going past 300 with just four wickets down. And then, on 60, the great man drove Dave Lawrence to mid-on where Hugh Morris held his last ever stroke on the full. The King walked back to another ovation, with 8,540 runs settled under his belt, the average just over fifty. He briefly took off his cap and held his bat aloft as banners proclaimed, “Viv, we will miss you.” And then he walked off with characteristic stutter, chomping on that ever present gum.

Dujon’s last innings in Test cricket was brief, a 14-minute struggle before nicking one from Lawrence for five. And on the fifth morning, Marshall lost his middle stump to Phil DeFreitas for 17. The last of the departing greats walked back with defeat looming in front of them, a situation they had seldom encountered during the past decade and a half. Richardson was the last out for 121, leaving England 143 to win.

Marshall was given the new ball as he ran in for the last time, his spectacular sprint perhaps lacking a bit of the old spring in the stride, the fiery menace somewhat more in memory than in the deliveries. He brought one back to trap Graham Gooch leg-before, the 376th and last wicket of his career.

Before that, from the other end, Pat Patterson had sent down a screamer that took the edge of Morris’s bat and ended in the gloves of Dujon. That was his 267th catch, his final dismissal in Test cricket, supplemented by his paltry collection of five stumpings from the rare occasions when a spinner was seen ambling in for West Indies during that era of pace power.

As Richards had vowed, England had to fight for the runs, but they got there with five wickets and a couple of hours to spare. The three giants of West Indian cricket left the field for the last time and along with them departed the sheen of splendid glory that had been associated with their cricket during all the years of their dominance. The islands are still waiting for the light of the magnificent days to return.

It took Australia five years to turn around after the departure of Chappell, Lillee and Marsh. The resurgent side became the best in the world by the mid-1990s, displacing the depleted West Indians. However, even after 22 years, cricket of the Caribbean is yet to recover from the triple blow. Murali Kartik: Spin bowling is all about self-belief