The Alfred Hitchcock movie that coincided with an Ashes Test.

Alfred Hitchcock, arguably the first great name in the genre of suspense and thrillers, was born August 13, 1899. Abhishek Mukherjee looks back at his exaltation at realising that the events of a Hitchcock movie had coincided exactly with an Ashes Test.

For many, Alfred Hitchcock is still synonymous to the mystifying realm of suspense movies. In a career spanning 54 years he had directed 54 movies a coincidence that I have always found incredible. Of all his movies, however, The Lady Vanishes (1938) holds a special place for me.

It was the characters Charters (played by Basil Radford) and Caldicott (played by Naunton Wayne) and their antics that made me realise the exact time during which the events of the movie took place. Between them, they added a new dimension to the movie. The plotline takes its own course, racing through the hotel and a train and thereafter, culminating in an impressive climax.

Charters and Caldicott remain in the side throughout, providing (for most people) comic relief of sorts. But of what sort?

The entire team gets stranded in a random hotel in a place called Bandrika (a fictitious place referred to as “one of Europe s few undiscovered corners” in the movie. Up to this point then, Charters and Caldicott had seemed to be commonplace characters. Until… there is a call for a certain Mr Seltzer, and the manager goes to find him.

Charters overhears that it s a call from London. He was already looking crestfallen at the lack of radio coverage and at the fact the only newspaper available in the hotel is from last month. But now his expression changes: he picks up the phone, and I couldn t believe my ears asks the person on the other side about what s happening to England at the Test match at Manchester.

I sat straight. And when the person on the other side responded that he wasn t aware, Charters responded, to my delight, with the words: “You can t be in England and not know the Test score.” 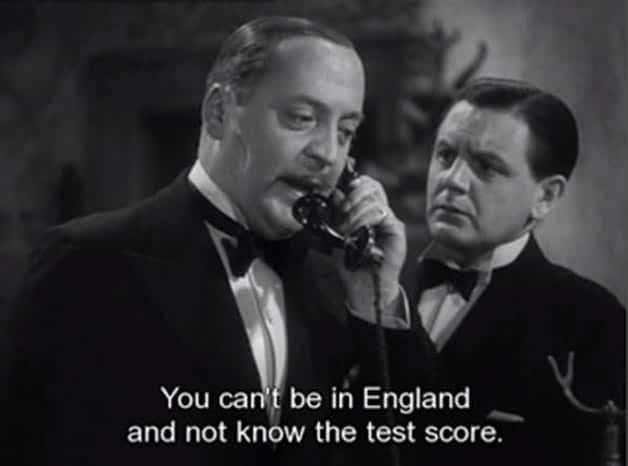 I fell in love with him that very moment. Haven t I felt like that like, say, a million times over the years?

The movie progressed. When Iris (played by Margaret Lockwood) and Mrs Froy (played by May Whitty) were having a meal in the salon, Charters and Caldicott were seated at the next table.

Charters: It wasn t out. But for the umpire s blunder, he d still be batting.

Caldicott: What do you mean?

Charters: I ll show you. I saw the whole thing.

(pours the sugar cubes on the table)

Waiter (at next table): Sugar?

Mrs Froy: Dear me. There s no sugar. 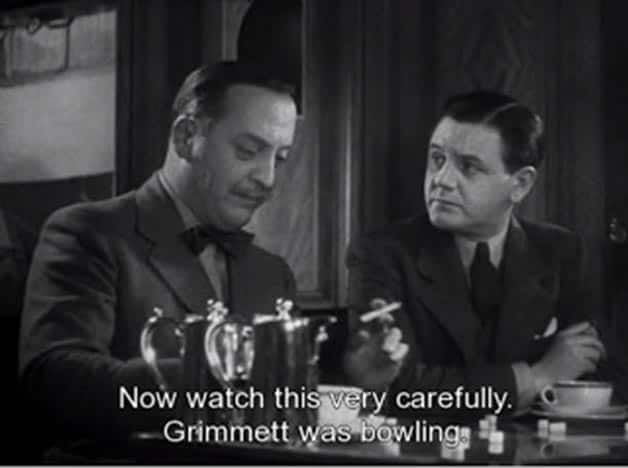 Iris: May I trouble you for the sugar?

(A speechless Charters passes it over)

Of course, I needed to look up how many times did ‘Grum [Grimmett] get Hammond out in all?

I checked: six times, in all. One of them bowled, one caught in the field, so ruled out for bad umpiring (possibly, possibly). However, there were two LBWs, both at Trent Bridge in 1930, and two caught by the wicketkeeper, at Headingley in 1930 and again at Trent Bridge, in 1934. We will never get to know which of the four this was, but then, I was so terribly excited at the mention of Grum and Wally that the plot had momentarily escaped my mind.

Of course, as the title suggests, Mrs Froy vanished from the fray. Iris joined hands with Gilbert (played by Michael Redgrave) in a frantic search inside the train. They bumped into our duo, and the following conversation followed:

Iris: I was having tea about an hour ago with an English lady. You saw her, didn t you?

Charters: Well, I don t know, I mean, I was talking to my friend, wasn t I?

Iris: Yes, but you were sitting at the next table. She turned and borrowed the sugar. You must remember.

Iris: Well, then you saw her.

Charters: I repeat we were deep in conversation. We were discussing cricket.

Iris: Well, I don t see how a thing like cricket can make you forget seeing people.

Charters (furious): Oh, don t you? If that s your attitude, there s nothing more to be said! Come, Caldicott. “Thing like cricket!” 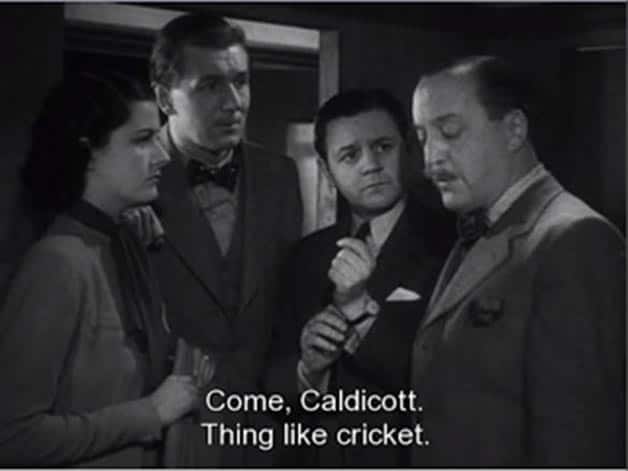 Gilbert: Wrong tactics. We should ve told him we were looking for a lost cricket ball.

Aah, yet again. It was me all over again! Charters was echoing my voice in exactly the same tone when anyone had dared to utter anything as blasphemous as “a thing like cricket!”

And then, when they landed in London, eager to catch the train to Manchester, they got to learn that the Test had been abandoned due to flood. 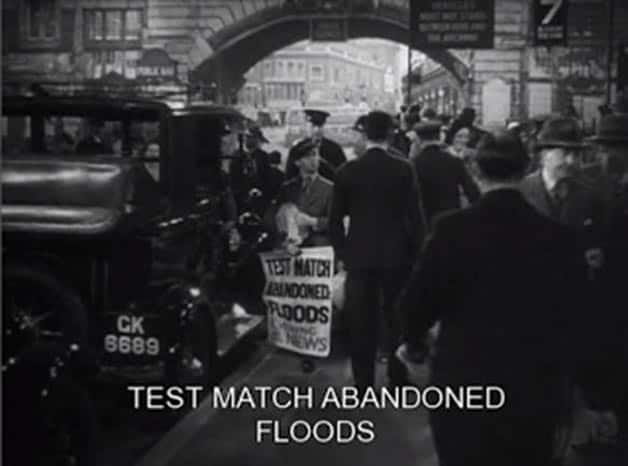 Was a Test really abandoned at Manchester due to floods? The movie was released on November 1, 1938. Of course there was an Ashes that year!

And of course the third Test at Old Trafford was washed out without a ball being bowled!

Thank you, Hitchcock, for providing me with perhaps the only movie whose events coincided with a real Test. I now know that the movies events were from July 8 to July 12, 1938.

Yes, The Lady Vanishes is my favourite Hitchcock movie now.

What happened to Charters and Caldicott?

– Charters and Caldicott became an immensely popular pair after The Lady Vanishes even attaining iconic status. Radford and Wayne played the same roles in Carol Reed s Night Train to Munich (1940), written by Frank Launder and Sidney Gilliat, who had also co-written The Lady Vanishes.

– Launder and Gilliat then started their own BBC Radio serials Crooks Tour (1941) and Secret Mission (1942); Radford and Wayne played the same roles in both serials. They also made an appearance in Launder and Gilliat s feature film Millions Like Us (1943).

– In the 1979 remake of The Lady Vanishes (directed by Anthony Page), Arthur Lowe played Charters and Ian Carmichael was cast as Caldicott.

– BBC ran a six-episode mystery series called Charters and Caldicott in 1985, portraying the post-retirement lives of the duo. Julian Amyes, the director, cast Robin Bailey as Charters and Michael Alridge as Caldicott.

(Abhishek Mukherjee is a cricket historian and Senior Cricket Writer at CricketCountry, thinks he can bowl decent leg-breaks in street cricket, and can be followed @ovshake42)