Composing one from the cricketers with their last names starting with L, CricketCountry Historian Arunabha Sengupta finds plenty of style and substance, balance and brilliance, with perhaps the most potent bowling attack.

Alphabetical All Time XIs are great fun. Composing one from the cricketers with their last names starting with L, Arunabha Sengupta finds plenty of style and substance, balance and brilliance, with perhaps the most potent bowling attack.

The L s are a pleasing lot. Especially for an All Time XI Selector.

They yield a balanced XI, also a brilliant one. There is style and substance in batting. The bowling is marked by a fantastic mix of frightening pace, masterly medium pace and supreme spin.

However, there is not really much scope for a lot of debate or deliberation. Most of the players choose themselves. Apart from a slightly difficult call about the wicketkeeper, the others are as close to ten sure picks as one can get.

Perhaps the only man whose omission is destined to rankle a bit, especially with yours truly. Maurice Leyland was a magnificent batsman in his time. But I cannot find a place for him in a middle order packed with elegance and efficiency.

The two men at the top of the order are Aussies, in the form of Justin Langer and Bill Lawry. Two limpets at the crease, two men most difficult to get rid of.

And that is followed by a middle-order of Brian Lara, Clive Lloyd and VVS Laxman. Can one do better? Of course one can in Alphabetic All-Time XIs, but here we find a voracious appetite for runs, frightening abilities to cut loose and amazing beauty of batsmanship. All these with numbers to back them, in thousands of Test runs at healthy averages.

Leyland just misses it, with Laxman and Lloyd having almost as good numbers over way greater number of Test matches.

At six comes the wicketkeeper. The choices were Gil Langley, Dick Lilley and Denis Lindsay. I must confess that I have gone for the best batsman of the lot. The bowling of this XI is too full of riches to play six batsmen, and hence the wicketkeeper has to double up as the sixth wielder of the willow. Hence Lindsay it is, a man with 3 centuries in 19 Tests and an average in the high 30s.

Ray Lindwall was a handy batsman, a destructive hitter, but to expect him to bat No. 6 was perhaps stretching it a bit.

But he is okay at No. 7. And there you go. The start of one of the most fearsome bowling attacks.

Lindwall and Harold Larwood, the former s beautiful run up modelled on the latter. And then there is the eternal Dennis the Menace Lillee. Lindwall, Larwood, Lillee. Three men who could put the fear of God in the hearts of batsmen. Which two do you give the new ball to? Or, more importantly, who do you dare not to give it to?

And when the battering with pace is done, it is the turn of the most successful bowler of all time to send down his medium-pace. The handsome, frail, George Lohmann. The man who averages 10.75 for his 112 wickets.

Lindwall, Larwood, Lillee, Lohmann, Laker. Is there any attack as potent as this? I have my doubts.

And therein lies the dream of a selector. There is no other L anywhere near them as far as bowling numbers are concerned. These five simply walk in to the side.

They have plenty of big guns to put runs on the board. But with this sort of a bowling attack they don t need too many. 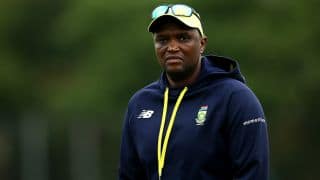