Just three years after the town came into being, the Melbourne Cricket Club was established.

November 15, 1838. Just three years after the town came into being, the Melbourne Cricket Club was established. Arunabha Sengupta looks back at the curious tales of old Australia associated with the formation of this great institution.

How deep-rooted is Melbourne’s association with cricket?

In some ways, it predates time. Indeed, the Melbourne Cricket Club (MCC) was formed on November 15, 1838, just over a year after plans of the great city were laid out. The public clocks came later, in 1843.

At the time the Cricket Club was agreed upon, time was still a matter of debate. There were two or three men in the town who called themselves watchmakers, but they were in constant disagreement about the time of the day. Sometimes their estimates differed by several hours.

Cricket also predated mail delivery and water supply in the city. When town dwellers needed water, they had to trek all the way down to the Yarra, armed with buckets.

It was in the Australian winter of 1835 that a disgruntled John Batman, grazier, explorer and entrepreneur, stepped aboard his ketch and sailed up the Yarra. His request for land grants in the Western Port area had been rejected by the New South Wales colonial authorities.

And on June 8, 1835, Batman found good fresh water, and made his way through the scrub and ti-tree. He liked what he saw. That day he wrote in his diary, “This will be the place for a village.” The Kulin Aboriginals on the shore were negotiated with and a treaty was drawn up. Burning with ambition Batman called the land Batmania, but that didn’t stick.

A year down the line, the 28-year-old surveyor Robert Russell arrived from Sydney. Batman had written that sometimes quail flew past in great clouds, often thousand at a time. Russell also found swans, pelicans, wild duck, hopping kangaroos, as well as 200 settlers with their 15,000 sheep.

Under the orders of Governor Richard Bourke, Russell prepared accurate, precise rectangle based plans that any current day Melbourne dweller will know so very well.

The Thirst for Sports

Young Russell liked the place, even though there was not much in the way of creature comfort. There were some scattered brick buildings, but the town mostly consisted of wattle and daub huts with bark and coarse shingles forming the roofs. The famous streets of today were full of cabbage patches and potato gardens.

And there was mud. Great swamps stretched across the streets. When Elizabeth Street was named, there were well supported arguments for using a ferry or a punt to cross it.

The people were mostly young, under 30. The older folks barely ventured in these parts. Many carried pistols, almost no one wore coats and everyone put on high boots. The Aborigines worked on odd jobs and disappeared to their camp settlements once the sun went down.

However, the countryside around the dismal settlement was lush green and picturesque. Russell often ventured out, shooting duck in the marshes and kangaroo on the river bank. He was a bundle of energy. The young men needed recreation, to work off their energy. And sports developed.

First came racing. In March 1838, on the west side of Spencer Street near Batman’s hill, was held the first horse race of Melbourne. And as can be expected, money was wagered as well. The site of this landmark event later housed the Spencer Street Railway Station.

But, down the months more Government officials and military men came to town, and so did more graziers. The driving force in the Port Phillip Association was Charles Santon, the banker and financier. He actively urged the British capitalists to invest in the new colony. Many came, mostly young, middle-class gentlemen, with public school background.

There streamed in civil servants, military officers, engineers, doctors, architects and writers. And they all expected to reproduce the life they had in England.

Hence, private clubs were of immediate requirement. And the cricket club was formed by certain key men.

Russell himself was one of the main enthusiasts, became a founder member and played in the first cricket match hosted by the city. And then there were others.

FA Powlett was the Crown Land Commissioner of the Western Division of the Port Phillip Settlement and also the first Police Magistrate. It is almost certain that he was also a descendant of Rev Charles Powlett, one of the founders of the Hambledon Club. Powlett excelled at the game, scored the first century and took the first hat-trick in the colony.

Alfred Mundy and CF Mundy were employees of the Melbourne Insurance Company.

These five gentlemen met on November 15, 1838, and drew up a document agreeing to form what was to be called the ‘Melbourne Cricket Club’. The document was signed by FA Powlett, R Russell, Alfred Mundy, CF Mundy and George B Smyth.

The five men paid one guinea each as subscription to DG McArthur, the first secretary of the club.

McArthur was the banker. He had arrived from Sydney to establish the Bank of Australasia, the first trading bank of Melbourne. The bank had predated the cricket club by just two and a half months and operated from a two roomed brick cottage on the north side of Little Collins Street, between the Elizabeth and Queen Streets. It was guarded by an armed sentry and two mastiffs.

Later, from 1868 to 1877, McArthur served as the president of the Melbourne Cricket Club.

For now, on that same November 15, 1838, using part of the money for subscription, McArthur bought two bats, balls and stumps. The cost of the purchase was £2/0/3.

Several other interesting men joined the club. There was Captain Bacchus of the 18th Light Dragoons, who became a grazier at Bacchus Marsh. William Highett, first manager of the Union Bank, was another early member. There was a youthful barrister by the name of Redmond Barry, who became Victoria’s first Solicitor-General.

And finally there was Peter Snodgrass, the man who fought the first duel in the colony. It was GB Smyth who provided the gunpowder for the duel and the guns were obtained from a Mr Hewdon in the village of Heidelberg.

The duel was fought on the cricket field. There was no casualty except for the little mishap of Mr Snodgrass shooting himself in the foot in his excitement. 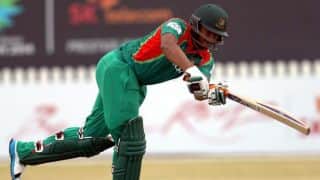 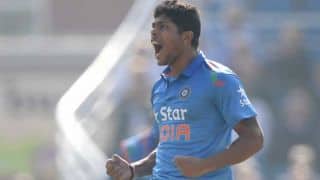