The N’s: Limited pool, decent side with genuine greats

The N’s: Limited pool, decent side with genuine greats

Composing one from the cricketers with their last names starting with N, CricketCountry Historian Arunabha Sengupta is constrained with limited number of candidates in the talent pool.

Alphabetical All Time XIs are great fun. Composing one from the cricketers with their last names starting with N, Arunabha Sengupta is constrained with limited number of candidates in the talent pool, but the resulting side is not a bad one.

When we move on to the N s, the talent pool is a small one. Just 22 of the 80-odd cricketers categorised under this letter of the alphabet have managed more than 10 Tests.

But at the same time there are some wonderful names, at least two genuine greats of the game.

Dudley Nourse was a long serving South African middle-order maestro on either side of the Second World War who scored nearly 3,000 runs at an average touching 54.

Another giant of the game is the former Australian captain and champion all-rounder Monty Noble, a fascinating swing bowler who could also open the batting with lan.

There is also the West Indian stalwart, one of the most underrated batsmen of the 1960s, Seymour Nurse.

And when we look at the bowling, there is the presence of the most experienced of all these cricketers in the form of Makhaya Ntini.

In fact, the pace-bowling probables form a rather intimidating lot. Alongside Ntini and Noble are the Kiwi Dion Nash, the South African Andre Nel, the useful English all-rounder Stan Nichols, the Pakistani Sarfraz Nawaz and the pioneering Indian speedster Mohammad Nissar.

And when we consider Mudassar Nazar as one of the opening batsmen, it becomes a problem of plenty, something one had not bargained for when coming up with an N XI.

We have to apply filtering considerations now. Nichols had a good Test record, but he was not considered worthy enough to play against Australia during his days. Only one of his 14 Tests came against the arch rivals, and he mainly played against the weaker opponents.

And while it breaks the heart to leave out Nissar, one has to acknowledge that 6 Tests is not enough data to go on.

I will however go back on this principle while making another choice in the team, but that is because the other department is not so well endowed with time-tested choices.

Between Nel and Sarfraz, I will go for the latter. Nel did fare decently in Australia but the rest of his success came in the grounds of West Indies and Zimbabwe, against rather weak opponents. Sarfraz did not travel particularly well, but did have comparatively good figures in Australia and brilliant ones in England.

Unlike the bowling, we are a bit short staffed in the batting department. And caught between the less than wonderful careers of Jimmy Neesham and Marcus North, I have to opt for the pre-Test greatness of CK Nayudu and include him in the side. And yes, that means some off-break resources.

As for the spinner, we had Sunil Narine. But that mystery operator, while enjoying himself with ball and bat in the IPL, has not done much in the Test arena. Hence, my choice would be the miserly Bapu Nadkarni, the most underrated of the Indian tweaking riches, who boasts an average comparable with the best in the game in his country. He was a handy batsman as well.

So Ntini, Nash, Nel, Noble and Nadkarni do make a rather good bowling line up, with Nayudu and Mudassar to back them up.

The wicketkeeping options are severely limited, and we I will go for the Aussie Peter Nevill rather than the two-Test wonder Janardan Navle.

The batting consists of Nurse, Nourse, Nayudu and Noble in the middle and Mudassar at the top.

The choice now is to put Noble at the top and get another middle order man in the side. Or we can go for a genuine opener and ask Noble to bat in the middle. The options are again, North, Neesham and Dave Nourse, father of Dudley, in the middle; or Imran Nazir at the top.

I would go for the specialist skills and slightly more robust experience of North. Both Neesham and Dave Nourse would have boosted the medium-pace brigade, but we have quite a bit of resources there. North s part time off-breaks will come in handy as well (he once took 6 for 55 at Lord s).

In the end we have a very well balanced team with plenty of class in the middle-order and some genuine depth in bowling. 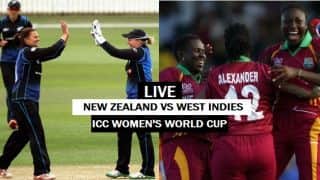