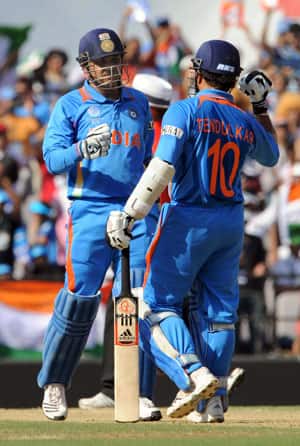 Going past the maestro… “I’m happy to have broken my role model Sachin Tendulkar’s record… Such opportunity comes only once in a lifetime and I amm happy I took it,” said Sehwag, who has scores of 309, 319 and 293 in Test matches © Getty Images

Virender Sehwag first fancied his chances of breaking the double ton barrier in One-Day Internationals (ODIs) in 2004. He had then become the first Indian batsman to strike a triple hundred (at Multan against Pakistan). India were playing UAE in the Asia Cup and that appeared an opportune moment. He was run out without opening his account in that fixture.

Six years hence, Sachin Tendulkar got to the record earlier. But Sehwag now owns the record for the highest ODI score – 219 against the West Indies at Indore.  With his unique approach to batting and an awesome strike-rate, he was always in with a chance. He has also twice struck triple centuries in Test cricket and narrowly missed out on a third against Sri Lanka in 2009.

Yet, for years, Sehwag fell short of his promise in ODIs. In spite of possessing a very explosive game, Sehwag has wound up thus far with an average of roughly 35, which is good, but pales in comparison to his Test average of 52. One would expect a Test opener with an average of over 50 to average at least over 40 in ODIs. But Sehwag has often struggled to convert his starts into big innings.

On Thursday, when he unleashed a Sehwag special on West Indies, nobody must have seen it coming. His form has been patchy since his return to international cricket earlier during the Test series against West Indies. He was offered the lifeline of two dropped chances on Thursday as well.  In his own words, he realised that God was with him and stayed the course.  He got to the coveted landmark in the 44th over and was back in the pavilion by the 47th.

Sehwag has himself emphasised the importance of batting through to the 50th over in ODIs and play big innings. But he has not always been able to live his motto. The overs limit in ODIs appears to pressure him (though, with his scoring rate, it shouldn’t) and he seems to manufacture too many strokes, inevitably perishing to a false one.

On Thursday, he probably found himself in the same zone that he was in when he tore into South Africa to bring up his second Test 300 at Chennai in 2008. That knock had come within matches of his comeback in Test cricket and he couldn’t have found a better way to announce his return in style. The difference between Sehwag and many other contemporary strokemakers is he actually relies much less on the aerial route and this enables him to be more consistent. His penetration of the square/cover region is so incredibly effective that he does not have to resort to the dangerous slog. The square drive has also fetched him tons of runs in Test cricket and enabled him to maintain an exceptionally high strike-rate for long durations.

Questions will be raised in the days to come about the merits of the achievement, considering the quality of the opposition. But this is hardly the first time a major individual or team landmark was brought up against weaker opposition. Sri Lanka amassed 398 against Kenya in the 1996 World Cup and Gary Kirsten struck an unbeaten 188 against UAE in the same tournament. Besides, West Indies have stretched India through the ODI series and won the third encounter. My pick for the greatest ODI knock of all time would be Vivian Richards’s unbeaten 189 (out of a team score of 272!) against England, a match West Indies went on to win by 104 runs. Sehwag’s achievement on Thursday is not nearly so monumental but creditable nevertheless, over and above its statistical significance. Besides, he can only play the opposition he is offered.

On another note, Sehwag’s double ton is great news for India in the run-up to the tour of Australia. He may just have peaked at the right time and there is now a great chance to kick- off India’s campaign to a positive start if Sehwag hits the ground running. Having conquered the ODI summit, he should now target the highest Test score. Another landmark that I have believed, and I am sure many other fans, is within his reach.

He missed out on opportunities to do so against South Africa and later against Sri Lanka.  Surely, it’s time for Sehwag to bag his double whammy. Here’s hoping he goes for it in Australia.