The Test will be learning experience for the young and relatively inexperienced squad.

The one-off Test match between India women and England women will be a great experience for the female cricketers who generally get to play just limited-overs cricket. Sameer Jha looks at how the match will help them.

India women‘s cricket team has a strong reason to be excited — they’ll be playing a Test match after eight years. Led by Mithali Raj, most of the team will get a chance to prove their mettle in the Test format for the first time. Only Raj, Jhulan Goswami  and Karuna Jain have had that chance before.

On paper, the English side looks like clear favorites. They had recently emerged victorious in the women’s version of the Ashes. Their players have recently been given central contracts and the team have received sponsorship deals too.

However, even if India end up on the losing side, the match is still a step in the right direction. The 12 young cricketers would definitely feel a fresh sense of pride as they wear the white shirt for their country.

After all, Test cricket requires a lot more grit and patience than limited-overs cricket. The players’ technique is tested. And so is their ability to recover from a failure. These young women, who have not played a Test before will certainly learn things about their game that will help them in limited overs format too.

It is one thing to play a blistering knock scoring 70 runs off 50 balls, quite another to patiently make a century off 180 balls. It is one thing to take wickets when the batswoman is looking to hit you for a sixer, quite another to do it when the batswoman is looking to hold fort regardless of the strike rate. Test cricket glory is, and always will be, the pinnacle of achievement in the game of cricket.

These young cricketers would have plenty of things to ask the trio of Mithali Raj , Jhulan Goswami and Karuna Jain who have previously travelled to England. The Indian women will need valiant performances in the upcoming match to clinch victory. 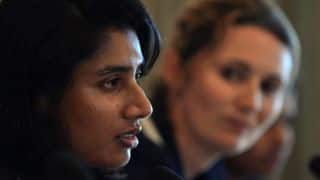 Pakistan tour of Sri Lanka 2014: Pakistan criticised by veterans for their defensiveness against hosts