The rise and rise of Afghanistan cricket

The rise and rise of Afghanistan cricket

The team triumphed in both formats on their second visit to Zimbabwe.

While most cricket lovers were following the engaging series between giants India and South Africa, another Asian country — not as big a name as India — registered a groundbreaking win that elevated their cricket to another level. Afghanistan continued their fairytale rise by winning the One-Day International (ODI) and Twenty20 International (T20I) series against Zimbabwe, an opposition some decades senior to them in international cricket, thereby continuing to announce themselves as an emerging talent in the map of world cricket. READ: Afghanistan dedicate T20I series win vs Zimbabwe to earthquake victims

Cricket in Afghanistan is noted to have started around the middle of the 19th century, but the Afghanistan Cricket Board (ACB) was formed only in the year 1995. It took them six more years to officialise their status as a cricket-playing nation, and by 2003 they were members of both International Cricket Council (ICC) and Asian Cricket Council (ACC). Their path to this stature, brought by the Afghan refugees hailing from Pakistan, was initially banned by the Taliban. Mindsets changed eventually, and the charm of the game compelled everyone to accept it as a legal sport to be played in the nation, and Afghan Cricket was born.

Amidst the distressful situation created by the war in Afghanistan, the newly born national team got a call from neighbours Pakistan to play in the second tier of Pakistani domestic cricket. Of the five matches played there, they lost three but drew two, leaving a bleak ray of hope. Though their first win came in the year 2003, the most significant one in the early days was the one against a Mike Gatting-led Marylebone Cricket Club (MCC) team, whom they defeated in the Middle East Cup 2006 at Mumbai, where former England skipper Gatting was out for a duck.

The progression continued as they kept on playing regular overseas tours. Though they did not win most of them, the urge of playing kept them going till they reached the 2009 ICC Cricket World Cup qualifiers. Their first big achievement in any major ICC event came when they qualified for the 2010 ICC World Twenty20. Though they failed to progress past the group stage, their remarkable rise was there for all to see. Their morale of the team was lowered as they failed to clear the qualifiers to play in ICC Cricket World Cup 2011, but they eventually made their 50-over World Cup debut in ICC Cricket World Cup 2015. They could not qualify to the next round, but gave a massive boost to their reputation by defeating Scotland — in what was possibly the most romantic moment of the tournament — and running Sri Lanka extremely close.

Another important tour awaited the Afghans in 2015. They had visited Zimbabwe before, in 2014. It was their first series against a full member of ICC. The series was drawn. Though the 2015 series started with a win over the Zimbabwe Chairman’s XI, Afghanistan lost their first match against the main Zimbabwean team. The hosts bowled them out for a mere 122, with 25 being the highest score by an Afghan batsman. Zimbabwean debutant Wellington Masakadza (Hamilton’s brother) took four crucial wickets, while the batsmen ended the match within 24 overs, with 8 wickets still in hand.

But the scenario took a 180-degree turn as Afghanistan won the next match by 58 runs. Opener Noor Ali Zadran scored 60, but Mohammad Nabi emerged as the hero, scoring an excellent 116. The Afghan bowlers then bowled out the home side to draw level in the series. Every bowler got a wicket, including debutant Rashid Khan, as no Zimbabwean batsman was allowed to get past 50.

By the time the fifth match could be played, the series had taken a dramatic turn. Zimbabwe and Afghanistan won the third and fourth match respectively and the series was again up for grabs for both of them. Asghar Stanikzai had found the team’s star batsman in Mohammad Shahzad, while Dawlat Zadran seemed to be the bowler who could change the course of the game at any stage. The toss for the decider went Zimbabwe’s way, and skipper Elton Chigumbura decided to field first. Afghanistan put up 245 for 9  on a batting-friendly pitch. Dawlat again bowled a magical spell of 4 for 22 in his 8 overs and Zimbabwe were all out for 172. Afghanistan registered a huge 73-run win and lifted a trophy against a full member nation for the very first time. Bear in mind, this was the same Zimbabwe side that had beaten New Zealand in an ODI mere months prior, and had nearly upset India as well.

The tour continued with the two-match T20 series. Zimbabwe, after facing a defeat at home in the ODIs, set Afghanistan 154. Dawlat again chipped in with 3 for 29. Afghanistan put in a team effort and picked up the necessary runs with five balls and six wickets remaining  to continue their winning streak.

The final match of the tour was the second T20I. This time a desperate Zimbabwe amassed 190 runs in their 20, with valiant contributions from every batsman. Afghanistan were faced with a huge chase, but proved their depth by including Usman Ghani and Gulbadin Naib, both of whom were playing their first matches of the tour. The duo proved to be the stars of the match, scoring 65 and 56 respectively. Mohammad Shahzad showed immense maturity by constantly rotating strike, unlike his usual style of destructive batting, and provided the necessary support to Ghani. Chasing at 9.63 runs per over, Afghanistan yet again came out on top and lifted the T20I trophy with a clear 2-0 dominance over the hosts.

As ICC World T20 2016 approaches, Afghanistan have managed yet another boost to their confidence and their reputation. The team triumphed in both formats on their second visit to Zimbabwe. It is special indeed, as this was also their first ever ODI and T20I series wins away against a strong team. It is even more special as it came at a time when the country lost many innocent lives as a result of an earthquake. The fable of Afghan cricket continues to enchant. 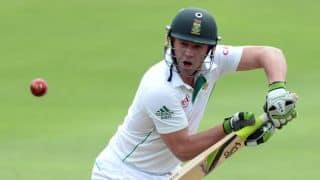