Composing one from the cricketers with their last names starting with S, CricketCountry Historian Arunabha Sengupta is spoilt for choice from a simply superb squad.

Alphabetical All-Time XIs are great fun. Composing one from the cricketers with their last names starting with S, Arunabha Sengupta is spoilt for choice from a simply superb squad.

If you struggle to find room for Graeme Smith, cannot fit Virender Sehwag into an opening slot, are forced to at least considering to play Kumar Sangakkara as a wicketkeeper-batsman and dismiss Shakib Al Hasan because there is a far greater all-rounder around, you know that you are in the midst of a special, special gathering.

Indeed, for all his greatness and achievements, the South African Smith finds himself pitted against Herbert Sutcliffe, one of the three greatest opening batsmen to have played the game alongside Jack Hobbs and Len Hutton. And then there is Bobby Simpson, with his numbers as an opener unbelievably good. Yes, unbelievably good, we find that more and more that during our analyses.

Hence, even Sehwag has to come down to the middle order if he has to get in the side while Michael Slater does not get even a look in. But in the middle order, Steven Smith has far better credentials than the Indian opener and he walks into the side. One can hardly ignore a man who averages over 60 for over 5000 runs, regardless of how workmanlike his batting may be.

That is some quality in the line-up.

I have often said that Sangakkara the batsman is too good to be played as a wicketkeeper. He averages 67 as a pure batsman. When he dons the bigger gloves, it comes down to 40. But can we afford to opt for a specialist wicketkeeper when the batting riches are so sparkling?

Smith and Sanga are in the middle. Obviously, Sir Garfield Sobers takes up the all-rounder s slot and even a player of the stature of Shakib seems a pretender next to him. But Sobers is not just an all-rounder. He is one of the top five batsmen to have ever played the game.

Into this crowded middle order steps in Arthur Shrewsbury. He averaged 35, but played Tests from 1881 to 1893, which gives the number a sheen akin to 50 in modern cricket. To put it mildly, he was the best batsman of England during a period that saw WG Grace prancing around in the game.

Another man who almost gets there is Drewy Stoddart, yet another superb batsman who averaged 35 plus in those early days.

Bert Sutcliffe, the gutsy Kiwi great who essayed one of the bravest innings of all time, also needs to sit out. Such is the strength of this incredible side.

We have some remarkable bowlers as well. Fred Spofforth, The Demon, starts things off. At the other end is Dale Steyn or Brian Statham. Any one of these two can run in with the new ball. Or should it be John Snow? In any case, I cannot dream of leaving any one of these four out.

There is the increasing temptation to make Sanga crouch behind the stumps and sneak Graeme Swann into the side. Or even use the luxury of such a great team to include the exotic lob bowler GH Simpson-Hayward (23 wickets at 18.26).

However, finally I need to walk my talk. I have written profusely about the folly of playing Sanga as a keeper. And therefore I go for a genuine stumper in the form of Herbert Strudwick.

Steyn, Snow and Statham will provide the pace; Spofforth the demonic essence; Sobers will switch between his various styles, pace, orthodox spin and back of the hand Chinaman; while Simpson will sometimes be called upon to bowl his leg-breaks. On rare occasions, Smith will turn his arm over with leg-spin.

Long tail? The batting is just like a many towered fortress, why should it even bother about the tail that follows?

This will definitely be one of the three strongest sides in the Alphabetical series. 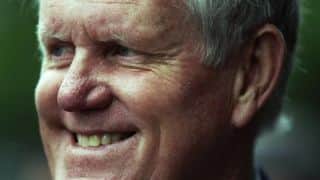 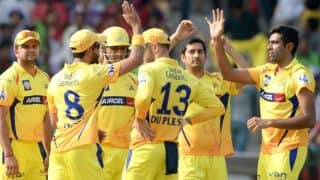