Though it is premature to say that the Tigers have finally arrived on the international scene, the Bangladesh team has definitely evolved over the period and improved their game by leaps and bounds.

For everyone in Mirpur, Dhaka and across Bangladesh for that matter, Wednesday’s clash against Pakistan was the most important event on the planet that evening. Like always, the fans thronged the stadium well before the start of the game and millions of others stayed glued to their TV sets. Their Prime Minister Sheikh Hasina too took time to be present at the venue all evening. Buoyed by this support, the Bangladesh team went on to beat Pakistan in what was being seen as the virtual semi-final by 5 wickets and set a date with India in the final on March 6. The support had always been there in the past too, but the team would mostly disappoint the scores of fans. But this team, which has been doing great things, is different. FULL CRICKET SCORECARD: Bangladesh vs Pakistan, Asia Cup T20 2016, Match 8 at Dhaka

The current Bangladesh team is full of self-belief and confidence oozes out from its every single member. Unlike the previous decade, when Bangladesh struggled to put together a decent team, this one is full of match-winners. Till some time back Shakib Al Hasan, Tamim Iqbal, Mashrafe Mortaza and Mushfiqur Rahim were all they had, and one of them failing resulted in team’s loss. But there has been a revolution of sorts in the cricket-crazy country and the likes of Soumya Sarkar, Sabbir Rahman, Mustafizur Rahman, Taskin Ahmed and Mahmudullah have all come up of late and done brilliantly. FULL BLOG: Bangladesh vs Pakistan, Asia Cup T20 2016, Match 8 at Dhaka.

This team started showing results a year back, where they had a fairly successful World Cup campaign. For the first time in their short history, they qualified for the quarter finals, where they went down fighting against India. Not to be bogged down by the defeat, the team continued the momentum in the couple of home series to follow. First they beat Pakistan 3-0 in the three-match ODI series and the lone T20I that followed, and then created a bigger moment for themselves in the history, when they beat a full-strength Indian team 2-1 soon after. READ: Bangladesh beat Pakistan by 5 wickets; book place in Asia Cup T20 final against India.

For all those who felt that the wins over Pakistan and India were flukes, they had their answer ready. South Africans came visiting soon after and the same fate befell them, as they also went on to lose to a spirited Bangladeshi side 1-2. However, the Proteas did fairly well by winning both T20Is — a format along with Test cricket where Bangladesh were struggling. Though their performance has not quite improved, it has gone up by many a notch in T20Is. Their wins over Sri Lanka and Pakistan in the ongoing Asia Cup have only underlined this fact.

Though it is premature to say that the Tigers have finally arrived on the international scene, as they have played little or no cricket away from home during this period, Bangladesh has definitely evolved over the period and improved their game by leaps and bounds. They are rising in stature with every outing and after making it to the Asia Cup final and with the ICC World T20 2016 being played in India, they have more opportunities awaiting to add to the story of their spectacular rise. But there are hurdles too. They have an in-form India and another host of teams in the qualifying round of the World T20 to deal with. If they can do so, and improve their away record, they will truly be a force to reckon with. For now, they can savour the moment and celebrate this success. 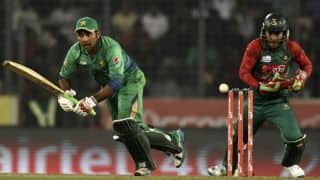